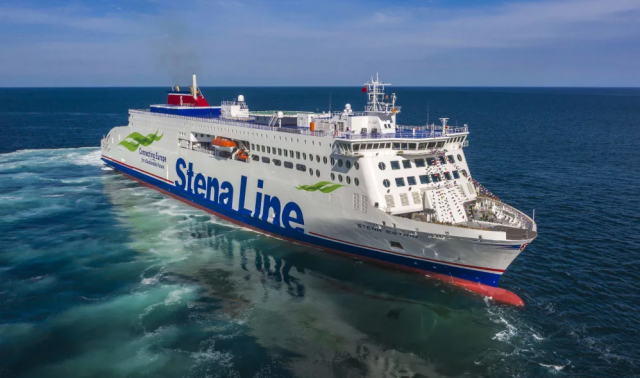 Stena’s versatile new generation of E-Flexer ro-pax ferries is set to make its debut on the Irish Sea, following completion of trials with the Stena Estrid off northern China’s Yellow Sea coast.

The newbuild will be assigned to Stena Line’s Holyhead/Dublin route. At 215m in overall length, she offers a freight intake of 3,100 lane-metres, plus space for 120 cars and provision for approximately 1,000 passengers.

Stena Ro-Ro has ordered a total of nine ro-pax vessels of the E-Flexer concept from AVIC Weihai shipyard, and Stena Estrid is the first of five chartered by Stena Line. Developed by the Finnish-headquartered, Chinese-owned technical consultancy Deltamarin in conjunction with the contractual owner, the design is claimed to represent a major advance in efficiency for its type and size.

The flexibility of the class with regard to service allocation, operating profile and customisation, is such that the four other newbuilds in the series have attracted long-term charters from two other players in the European short-sea market, Brittany Ferries and DFDS.

The 42,400gt Stena Estrid is scheduled to be phased on to the Holyhead/Dublin route, one of the primary conduits for traffic between the British mainland with the Republic of Ireland, in early 2020. Sistership Stena Edda is due to follow next spring, for deployment on the Liverpool/Belfast run, to which the third Stena Line-chartered E-Flexer, Stena Embla, is also expected to be allocated in 2021.

The fourth and fifth vessels for Stena Line’s European short-sea network will be an extended version of the design, wherein capacity has been upped to 3,600 lane-metres of freight plus 1,200 passengers.

The primary power installation in the Stena Estrid is based on two engines, rather than the four-engine solution common to high-capacity ro-pax ferries. Anticipated maximum speed is 22 knots from the two 12-cylinder, MaK VM43C engines driving controllable pitch propellers through reduction gears.

An unusual feature is the adoption of fully-feathering propellers. At speeds under 18 knots, economical operation can be maintained on a single propeller, with the other unit feathered so as to reduce resistance. Hydrodynamic efficiency is enhanced by the nature of the hull lines, incorporating an optimised bulb, a sternship form that minimises wave-making, and special openings for the bow thruster tunnels.

The vessel has been laid out and certificated to be ‘gas ready’, so as to facilitate possible future conversion to LNG or methanol fuel.

Economies of scale in conjunction with the closest attention to power and propulsion arrangements and hydrodynamic shape promise about 25% less CO2 emissions per freight unit than existing ferries. A drive-through configuration was chosen to ensure expeditious turnarounds on the busy short-sea crossing.

The layout and technical specification for three E-Flexer newbuilds to be deployed on bareboat charter by Brittany Ferries, plus the singleton fixed for 10 years to DFDS, varies in accordance with the individual operators’ requirements.