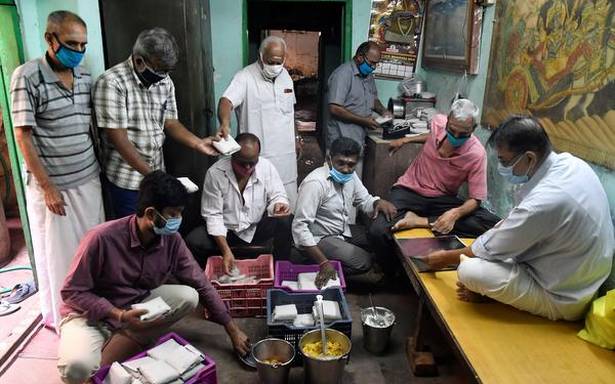 Every year, 79-year-old N. Chandramouli, his seven brothers and their families don’t miss participating in the Kapaleeshwar temple car festival in Mylapore. They have been following the tradition of serving food to the poor who attend the festival. The food is cooked by their three cooks.

The brothers were getting ready for the festival this year, when it was going to be held in April, and they had kept the stocks in their kitchen. And then the first lockdown came into effect in March, cancelling the temple car festival. But the lockdown restrictions did not stop them from continuing with the tradition of serving the poor. They have been providing them with free food for 156 days between April and September, on the trot. Along with the food, safety kits were also distributed. And, they still continue .

“We saw many poor people struggling to manage one square meal a day, and so with some support from our friends and relatives in the city and elsewhere we mobilised funds to serve the poor in the neighbourhood during the lockdown,” says 56-year-old N. Vidyanathan, the youngest among the eight brothers.

With the three cooks — Kannan, Krishnan and Kumar at their house on Mathala Narayanan Street near the Jain temple, off Kutchery Road, Mylapore — they divide the work the previous evening.

While the work of buying vegetables from the Broadway market and chopping them into varying sizes are carried out by the younger brothers and their children; washing the vegetables, rice and cooking them are done by the cooks and the women in the family. The menu includes sambar rice, vada, curd rice and sweets and a 200 ml water bottle.

“Many neighbours supported and helped us continue the free food distribution during the lockdown; some shared our roles and a few others shopped for vegetables at the Broadway market. Many others contributed monetarily,” says N. Pattabi, another brother.

Between noon and 2 p.m every day, the brothers and their children, along with a handful of neighbours, visit key roads and intersections in Mylapore, Luz Corner, Mandavali, Santhome, Royapettah and Foreshore Estate to distribute food packets to the needy.

Close to 1,200 persons including 300 frontline workers, mainly conservancy staff of the Greater Chennai Corporation were also provided with food on all days including Sundays. The brothers also gave 20,000 free safety kits which included face masks, gloves and hand sanitisers. With the easing of lockdown restrictions by the State government, the brothers have only slowed down the service, and not stopped it.

Coronavirus fires up production at Australia’s only medical mask factory