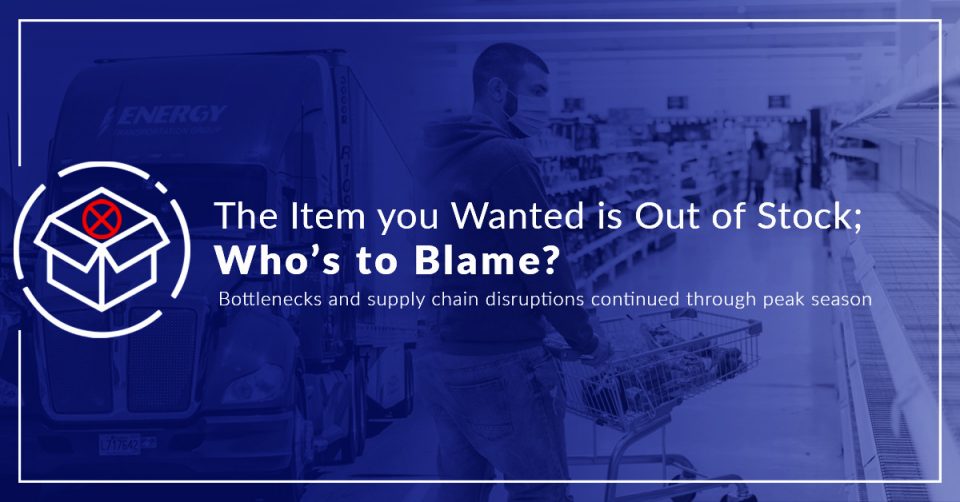 We would expect with the traditional peak season behind us, freight volumes will drop off in January, right? If we learned anything in 2020, it should be that the new normal is not normal at all, and we should expect similar supply chain challenges well into 2021. Our collective reaction to the COVID pandemic changed consumer behavior nearly overnight, forcing retailers, e-tailers, distributors, wholesalers and manufacturers to immediately reimagine their supply chains. Several months into the pandemic, we would have expected the agility we had worked into our supply chain to have smoothed out the flow.

However, during the test of Black Friday this year, that fleece jacket you wanted to take off the fall chill or the gaming console you planned to get you through your dead-of-winter quarantine may not have been on the shelves. Was it the typical out-of-stock at the retailer? Perhaps caused by an upstream supply disruption? Or was it a pivot in retail strategy?

Acknowledging the vast shift in how consumers shopped this year and especially considering how Black Friday foot traffic was down 52% year-over-year, empty store shelves might be more of a strategy than a mistake. A search for the correct answer could be rather complicated.

“If empty racks were purposeful, there are benefits,” said Andrew Cox, senior retail analyst at FreightWaves. “Their margins over the next two quarters should be a good indication. Retailers had to make very tough and imperfect decisions when ordering for the holiday season. Many retailers prioritized the items with the fastest exit velocity during the pandemic. Inventories are very low — this has been well documented. The sacrifice of leaving sales on the table is rewarded with less need to discount at year-end.”

According to Jason Ickert, senior director of business development at ENERGY Transportation Group, the out-of-stock issues of 2020 don’t rest solely on the shoulders of the retailers, but also on suppliers and the logistics infrastructure as a whole. In North America, it’s easy for the consumer to attach blame to Walmart, Costco or Target, unaware of the symbiotic relationships across the entire global supply chain that work in sync to keep shelves stocked … whether it be iPhones or toilet paper.

“Most of the things we use in our home or office while conducting our daily lives are globally sourced,” said Ickert. “The pandemic caused the entire supply chain, from womb to tomb, to be disrupted, and like we saw with the toilet paper supply chain last April, changing the direction in which supply chains flow can be much like turning the Titanic in a swimming pool.”

Cox agrees that retailers had to deal with disruptions this year on both the demand and supply side. Looking at the congestion issues at the Port of Los Angeles, the busiest gateway by volume for U.S. trade with China, he said, “There are shortages at every level, from voyages, to port space, to warehouse capacity, truck and rail capacity, and now even empty containers.”

At times, there have been more than a dozen ships lined up at sea, full of imported cargo, while drayage drivers wait in line for five hours until their appointment expires and they have to start over.

Once the cargo has reached the shores and gotten past that initial congestion, the middle-mile journey begins between the deconsolidator, distribution center, wholesaler, distributor and retailer, which is the primary space where ENERGY plays ⁠— a space fraught with its own set of inefficiencies. “We recently looked at some master cartons in our warehouse in Montreal, and they had no less than seven different transportation providers’ stickers on them,” said Ickert. “In the middle miles, we might haul from a deconsolidator to a wholesaler to a retail DC and then a store within a group of trading partners. We found that our trucks were hauling the same cartons and pallets, two or three different times in the middle miles before it was actually bought by the consumer.”

The bottleneck importers experienced on the West Coast this peak season spread inland as secondary and tertiary markets started to bleed off excess volume on their way to consumers. Because fewer people were doing their holiday shopping in brick-and-mortar stores, USPS and commercial parcel carriers alike have been busier delivering in the last mile than ever before.

ShipMatrix, a technology provider to parcel shippers, estimates that 7.2 million more packages will need to be shipped each day this holiday season than the system has the capacity to handle. This has caused some parcel carriers to cap their customers, allowing them only to expand their shipping volume by a small percentage, while at the same announcing rate increases via surcharges to go into effect through peak season. UPS and FedEx, for example, temporarily stopped making pickups from some of their largest retail customers simply because they had already exceeded their agreed-upon limit ⁠— an entirely prudent move, according to Mike Erickson, founder of parcel consultancy AFMS.

The story of ocean and inland port bottlenecks, the truckload capacity crunch, container shortages, and the surge of parcel deliveries in the last mile will continue well into the first quarter of 2021. “Our customers include brick-and-mortar retailers, online e-tailers, wholesalers and distributors that feed the Amazons or Walmarts of the world. The discussion we’re having with them currently is how are we addressing together inefficiencies in the supply chain that are causing increased cost, slower inventory velocities — and a retailer’s worst fear — the inability to deliver a product to the consumer when they want to make a purchase.”

While the distribution of vaccines is again highlighting the marvels of modern logistics, manufacturing and distribution of the vaccine will continue throughout the entire 2021 calendar year. Ickert believes it will take several quarters for most Americans to be immunized, meaning Americans will likely continue to work from home when they can, and spend more of their money on goods, as opposed to travel, eating out or catching a live show. “The annual manufacturing break in China which occurs over the Chinese New Year might free up the ports a little and allow imports to flow a little more freely. Additionally, we might see consumer spending peak after Christmas, giving retailers the opportunity to restock their inventories. The capacity crunch though, driving rates up in the truckload sector, is something that I see continuing through Q2 2021.”

GCC plan to resolve transport and trade issues ‘within a week’ amid reconciliation: UAE – Your Middle East

Plans by Government to Repatriate Irish Residents By Sea & Air

What Brexit deal means for me: Six bosses tell all