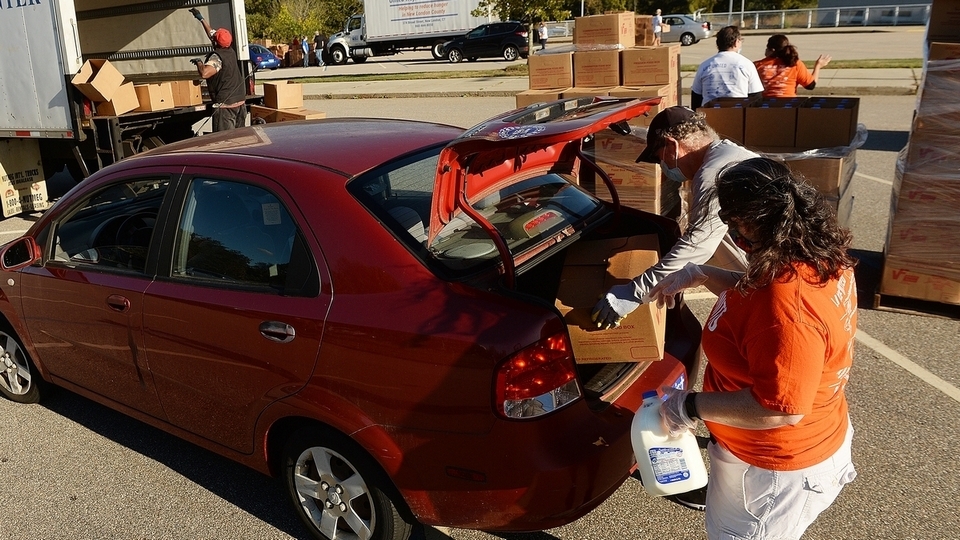 Groton — A steady stream of cars, with traffic backed up down the road, drove through the Fitch High School parking lot on Wednesday, as United Way of Southeastern Connecticut staff and volunteers directed the vehicles to stations to pick up boxes of food.

“You’re all set! Enjoy,” said Pam Gonski, an Electric Boat employee who is working for United Way for three months, after she lifted a food box into a vehicle on late Wednesday afternoon. She called it “very busy but very rewarding” to help out, and she said it’s nice to see that they were able to get food to people, especially when times are so tough.

United Way was holding a Farmers-to-Families Food Box distribution event late Wednesday afternoon and early evening to provide food to anyone in need. The event was the first in a series of weekly distributions over a five-week period.

The event was set to begin at 4:30 p.m., but people started arriving as early as 3 p.m. United Way trucks brought 768 boxes of food to the site, and volunteers unloaded boxes from the truck and placed them in people’s vehicles at stations set up in the parking lot.

“It really shows to me just how supportive our community is and that we always all look after each other,” said Dina Sears-Graves, vice president of community impact for the United Way, as she watched about 15 volunteers busily working to carry food to people and exchanging greetings with them.

Each household received 5 pounds of dairy, 5 pounds of produce, 5 pounds of meat and a gallon of milk, Sears-Graves said. The food distributor is Vincent Farms.

The food is made available through the United States Department of Agriculture’s Farmers-to-Families Food Box Program, which is part of the Coronavirus Food Assistance Program, she said. The state Department of Agriculture is coordinating the program in Connecticut through the end of October, according to a news release from Gov. Ned Lamont’s office.

The United Way of Southeastern Connecticut is coordinating weekly food box distributions in the region, starting this week at Fitch High School and then for four more weeks at different sites around the area, Sears-Graves said. The United Way will post the other sites as soon as they are confirmed.

In addition, the United Way also will coordinate with five agencies in Norwich to distribute food on a weekly basis at five sites over the same period, starting next Friday, she said.

Groton resident Michelle Clark said what they are doing is amazing and she appreciates it.

“It’s overwhelming,” said Clark, adding that the food distribution helps a lot of individuals and families who are struggling during these times.

Sears-Graves said that at the height of the COVID-19 pandemic, right before the United Way suspended its mobile distributions in March due to concerns over being able to provide sufficient social distancing at the sites, about 500 people were coming to the mobile distributions.

She said the “pop-up style” distributions, such as the one Wednesday at Fitch, are a great opportunity because the boxes are prepackaged, so all that’s needed is to drive the trucks over and have a smaller group work on site, rather than having people in the warehouse packaging food.

“We’re really excited about this opportunity to get back out into the community and do the work,” she said.

Jenn Hess, a Foxwoods employee and Gales Ferry resident, was volunteering with her son, Daniel, 13, and other Foxwoods employees on Wednesday at the Fitch High School site. She said her son loves to volunteer and it’s amazing to see him help out. She said she had a “very happy heart” as she volunteered.

“Everybody is very grateful,” she said. “It’s just a great feeling.”

Tuesday’s Debate Made Clear the Gravest Threat to the Election: The President Himself