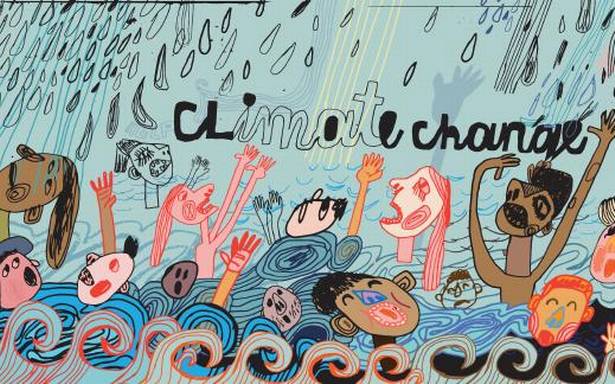 Picture this: a decade or so from now, you are forced to leave your country due to recurring floods or air quality so bad you can’t step outdoors. It may seem impossible right now as you read this in the comfort of your home, but for many across the world, this is reality. And it isn’t too far for us either.

It is becoming clear that climate crisis is creating more refugees than war. Instead of focusing on weeding out ‘illegal immigrants’, the government should stress on what is a much larger issue: the irreversible damage we are causing our environment and the rise in climate refugees. Before you roll your eyes at the comparison, you may want to look at these hard-hitting statistics on environmental migrants from the World Migration Report, 2020.

International organisations have called out erring countries. The National Security, Military, and Intelligence Panel on Climate Change’s report this month states that religious extremism in South and Southeast Asian countries like Bangladesh, Indonesia, Malaysia, and India has increased, as populations blame governments for protracted poverty, unemployment, and lack of services. These conditions are likely to become more acute with increasingly harsh climate impacts.

Countries need to wake up to the fact that weather-related events are causing the most havoc. Just last month, Filippo Grandi, the United Nations High Commissioner for Refugees, attended the World Economic Forum and said (in an interview to Reuters): ‘The world needs to prepare for millions of people being driven from their homes by the impact of climate change’. How is this not making the headlines and creating social media buzz?

These facts are especially worrying for us in Asia. The IOM report highlights that ‘Southern Asian populations are ‘particularly vulnerable to slow-onset and rapid-onset disasters related to natural hazards and climate change’. The region has the highest number of people at risk of displacement as a result of sudden-onset hazards, with Bangladesh, India and Pakistan having the highest disaster risk. In 2018, India bore most of the brunt of the disasters in the region: over 2.7 million displacements were recorded due to tropical storms and floods.

Rise in sea level is officially the ‘most devastating climate threat’ to the Asia-Pacific region. Reports state that over 37 million people in the East Asian and Pacific regions could be displaced by a one-metre rise and the number would double in the case of a two-metre rise. Coastal cities like Mumbai, Bangkok, Jakarta, Ho Chi Minh City, and Guangzhou are on the firing line and will see huge economic and livelihood losses from rising seas.

But are countries willing to open their borders? Five years ago, Ioane Teitiota from the Republic of Kiribati in the central Pacific Ocean identified himself as a climate refugee and sought asylum in New Zealand. He mentioned violent land disputes, environmental degradation, failing crops and contaminated water as reasons to find safer ground. His application was rejected and he then approached the UN Human Rights Committee. While the Committee couldn’t get him asylum as ‘sufficient protection measures were put in place’ in Kiribati, the case was a starting point for future climate change-related asylum claims.

In a historic ruling on January 21 this year, the United Nations (UN) declared that ‘countries cannot deport people who have sought asylum due to climate-related threats’. But let’s be realistic. A simple declaration isn’t going to get countries to change laws in a matter of days. Take Germany, for instance. Earlier this month, the country denied asylum to climate refugees. Refusing to recognise ‘flight from climatic conditions and changes’ as a viable reason for asylum, the federal government’s official statement said: ‘People in third countries who leave their homes solely because of the negative consequences of climate change are not refugees in the sense of the Geneva Refugee Convention under current international treaty law’.

What we need is a clear classification of who qualifies as a climate refugee, plausible causes that grant him/her that status, the countries to approach and assessing their economic and climactic conditions, among several other factors.

The IOM report has analysed that there have been substantial developments in global migration governance in recent years. However, ‘an overarching framework has not yet fully emerged to provide policy guidance where human mobility and environmental stressors, including climate change, intersect’.

The UN’s January declaration is a step in the right direction, and we can only hope that it leads to an international law to help tackle the massive climate crisis and help the affected people.

Who spells out Universal Health Coverage