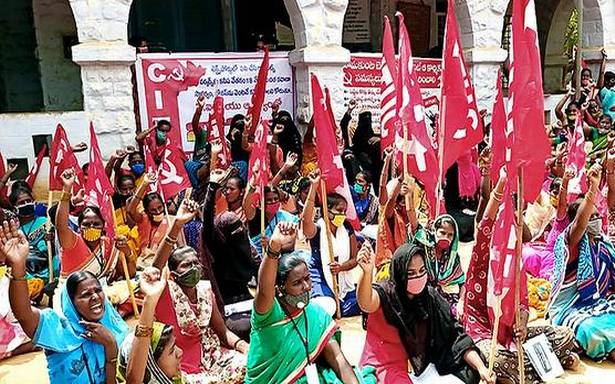 Around 4,000 employees of the Texport Garments factory in the Hindupur industrial estate close to the Karnataka border, have been agitating since October 5, seeking minimum wages of ₹18,000 per month as recommended by the Centre.

On the fourth day of the agitation on Friday, the Left parties including the Communist Party of India (Marxist), its trade union wing Centre of Indian Trade Unions (CITU) and Communist Party of India (CPI) leaders staged a dharna in front of the tahsildar’s office and submitted a memorandum to the tahsildar, seeking resolution of the ongoing industrial dispute in the three units of the Texport Garments.

Addressing the workers, CITU State president Ch. Narasinga Rao said that the Centre had passed a law making ₹18,000 as the minimum wage all over the country, but this was not being implemented in many industries.

“The $80-million Texport company with several garment manufacturing units across the country pays the lowest wages to the Hindupur unit workers, with an average of ₹6,000 per month,” he said.

He also alleged that the working conditions for the women employees at the unit was very bad and they were paid somewhere between ₹5,000 and ₹7,000, depending on how many days they worked.

The company is granting additional pay only when they work on all 26 working days in a month, said Mr. Narasinga Rao.

He said the Jockey garments factory in Karnataka, just 2 km away from this industrial cluster on the other side of the inter-State border, paid ₹12,000 per month. “The Joint Commissioner of Labour Department has promised to hold a joint meeting of the management, workers and the department to discuss the wage revision issue,” he said.

How supply chain planning contributes to scaling your business