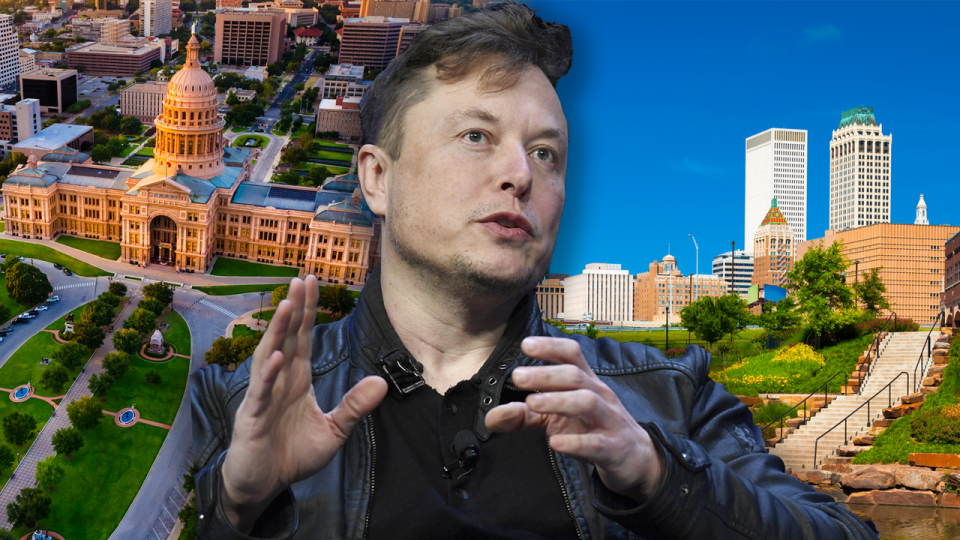 Oklahoma Secretary of Commerce and Workforce Development Sean Kouplen on offering a ‘competitive’ proposal to Tesla to open the company’s new factory in his state.

Get all the latest news on coronavirus and more delivered daily to your inbox. Sign up here.

Tesla CEO Elon Musk’s short-lived spat with county officials over reopening a sprawling California factory led him to threaten to leave the state ⁠— and officials in states from Colorado to Florida are now wooing the company.

“Tesla will now move its HQ and future programs to Texas/Nevada immediately,” Musk wrote on Twitter on May 9. “If we even retain Fremont manufacturing activity at all, it will be [dependent] on how Tesla is treated in the future. Tesla is the last carmaker left in [California].”

The new factory would build Tesla’s upcoming “Cybertruck” as well as be a second site to build the Model Y small SUV.

Now, rumors are swirling that Tesla will choose Austin, Texas, or Tulsa, Oklahoma, for future cites, but that hasn’t stopped cities throughout the country from expressing interest in cutting Tesla a deal.

Texas Gov. Greg Abbott confirmed earlier in May that he had spoken with Musk about moving some of Tesla’s facilities to the state.

“Texas is a perfect fit for Tesla,” Abbott wrote on Twitter.

Austin, a tech hub, would make sense as a new home for Tesla, but Dallas Mayor Eric Johnson has also expressed interest in attracting Tesla.

Tulsa Mayor G.T. Bynum had a creative way of catching Tesla’s attention: floating the idea of a fleet of police cybertrucks, one of Tesla’s more recognizable vehicles.

“If Tesla and #Tulsa team up to change the world, it would only be right to #BuyLocal,” Bynum wrote on Twitter.

Tulsa, which has a population of roughly 400,000, could extend its penchant for unique incentives to Tesla. The city’s Tulsa Remote program offers grants of $10,000 to remote and digital workers who move there.

The company has a second U.S. factory in Reno, where it builds batteries for its vehicles and employs about 6,500 people.

Colorado Gov. Jared Polis reached out to Musk earlier in May.

“Hi Jared, Colorado is great! I think your policies make a lot of sense,” Musk responded.

Florida’s St. Johns County, which is south of Jacksonville, passed a resolution in May encouraging Tesla to go coastal and invest there. St. Johns County officials touted its ranking as one of the best Florida counties to live in and invest.

“Tesla, Inc., is hereby respectfully and enthusiastically invited to consider St. Johns County, Florida, as a potential destination in the relocation of its headquarters or any future programs,” the resolution states.

The Associated Press contributed to this report.

ATF to investigate after 4 injured in Dippin Dots factory explosion

How to factory reset a Chromebook