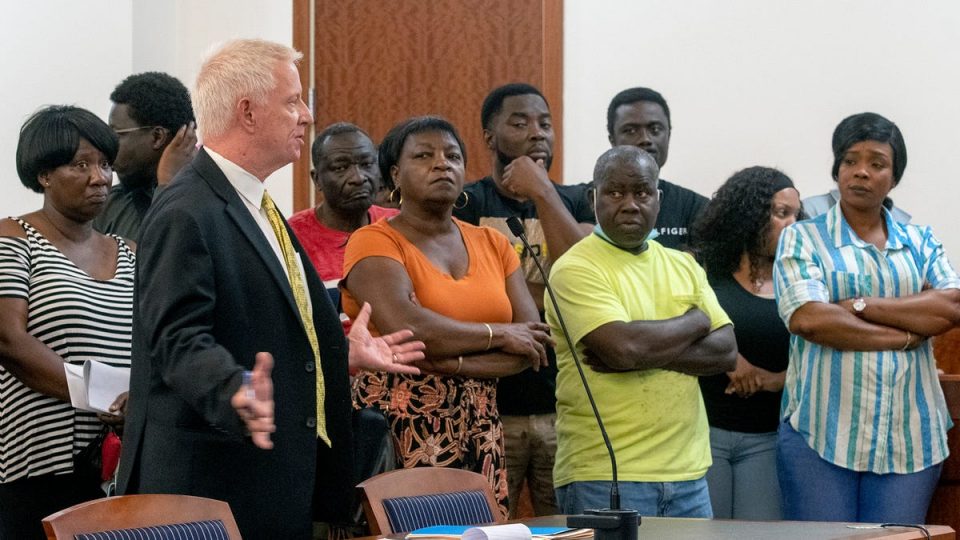 WORCESTER — Residents of a partially collapsed Mill Street apartment building bunched around outside Housing Court as they waited hours Thursday for mediations on the terms of them collecting their belongings from the building owned by Franklin-based Fren Management Company Inc.

Attorneys projected that the process would take all day and said that the parties in the early mediations have been able to agree to terms.

Thursday’s court appearance was dedicated to handling the matter of the owners of Pond View Apartment Homes at 267 Mill St., taking the tenants of the partially collapsed building to court over getting approval to enter the apartment units so tenants can pick up or discard belongings. Some tenants who could not get to mediation today may need to return Friday or next week.

On July 15, an early-morning roofing job at a Mill Street apartment building apparently led to construction material falling through the roof, weakening the building and forcing the evacuation of residents.

In a news release Friday, the city announced that an investigation into the collapse and its cause will be conducted by the insurance companies and experts in engineering.

The city cannot make a determination into the case because it does not employ a structural engineer, the release said.

An initial hearing July 25 was postponed due to the lack of presence of city engineers. A second court date July 27 saw city inspectors say that they agreed with a structural review by engineers hired by the plaintiff that most of the units were safe to enter to retrieve belongings.

Fren Management lawyer, Walter H. Jacobs, has said multiple times in court that the building has been exposed to the elements due to the hole in the roof and it is possible for mold to develop on the belongings and spread throughout the building.

The property owners, Michelle and Bechara “Bash” Fren, also want to schedule engineers to enter the building to start working on the walls and begin restoring the building. 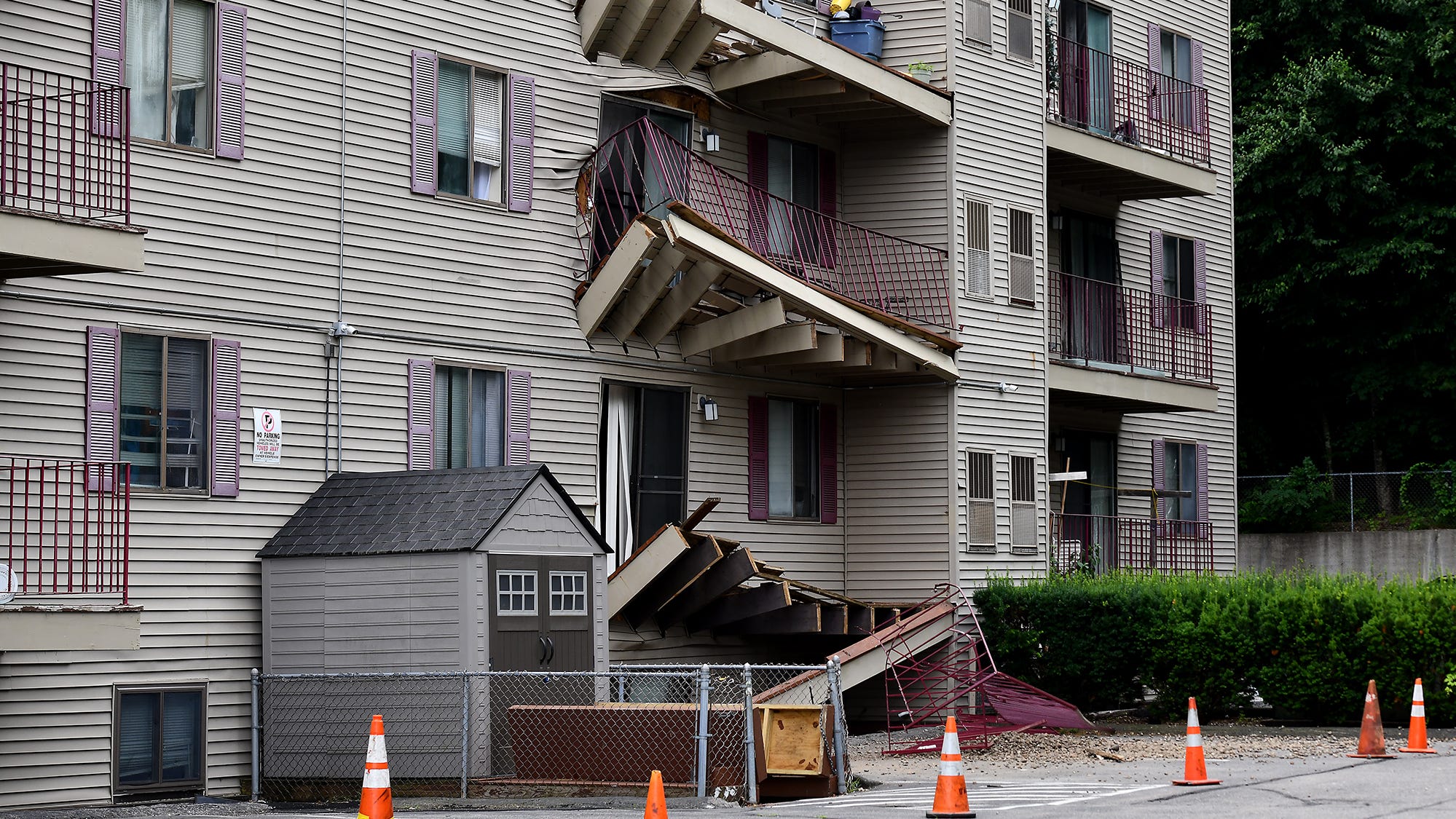 However, the cases were pushed into the following week when judge Diana H. Horan found that plaintiff Fren Management did not appear to be entirely prepared with accessible storage for residents’ belongings.

Jacobs said last week that his client could not find available storage that could handle the scale of the belongings in Worcester County and said that storage was available in Brockton and North Chelmsford.

Fren Management had promised to pay for movers and storage to residents who needed it July 27, which tenants were previously unsure would be the case.

Tenants said that some storage was later found in Worcester and that Fren Management had set up storage pods on the property for some residents who still had their belongings in the building.

Horan said at the start of the day that she intended for Thursday to be the last day in court over the matter of picking up tenants’ belongings.

“The court is running the process today,” Horan said. “Not the lawyers, not the politicians, not the litigants.”

Horan has said previously that other matters related to the collapse may be handled in a courtroom setting at a later date.

Lawyer Craig Ornell came to court representing around 15 of the tenants and Community Legal Aid came with 10 staff lawyers and an additional attorney to represent any tenants who did not meet Community Legal Aid’s income-level requirements for representation.

Most of the tenants had representation by the time they began mediation. Other residents had already collected their belongings and moved into a new residence.

A block of tenants awaited their mediations in a process that took several hours in a hallway in the Worcester District Court. Horan advised the lawyers that they should avoid hallway conversations between the parties and solely talk in the mediation room.

A template agreement provided by Community Legal Aid reiterates that the agreement only covers storage and access to possessions and that defendants reserve the right to file counterclaims or sue in other matters.

The template would also preserve the defendant’s claim that their tenancy remains intact and a claim to their right to possession of the apartment.

The template agreement would establish a date and time for defendants, or agents of the plaintiff, to come and pick up belongings. The defendants would need to notify the property owners of any additional dates needed and when they have moved the belongings.

In the template, Fren Management would pay for the moving company. The tenants should be present to choose which items to store or the movers will either move all items or be given the authority to decide what to discard, the template says.

The template would also allow for immediate retrieval of pets, medications and immediate needs. Tenants can also access the premises to take photos, perform insurance inspections and other needs and Fren Management would also have to secure the personal property.

Attorneys for both parties had to appear before Horan to address the matter of tenancy. Lawyers representing the tenants wanted to make it clear that their clients reserve the right to go to court on matters such as rehousing and damages.

The parties resolved to add language that said the plaintiff does not concede the merit of any future claims.

Residents whose units collapsed into each other took longer to address in mediation.

After the collapse, tenants have repeatedly voiced their frustrations with Fren Management’s handling of the matter and their communication.

Tenants have said that they feel that the property owners have been rushing them to collect their belongings and do so on their preferred time table. They have reported having to come to the building when the weather was hot and feeling sick from the work.

Tenants have also claimed that their belongings have been moved while they were out of the units. Jacobs has denied that Fren Management staff have been in the units since the collapse.

Former resident Trish Depiro said that she would collect her items this weekend and that any salvageable belongings or food that she could not keep would be donated to the Salvation Army and a food pantry.

Depiro said she has secured a temporary residence for six months, so she is able to move her belongings into her residence. She also requested that Fren Management provide her with ample light to help her retrieve the belongings.

“This has been quite an upheaval for me,” Depiro said. “(Fren Management) has been really harassing me with, ‘Are you done yet?’ “

Depiro said she has bruises from trying to pick up her belongings and has trauma from the collapse, saying that she hears the sound of the collapse coming “like a meteorite” when she sleeps.

She intends to sue Fren Management in court for damages, but Depiro said some progress was made today.

Eric Asamoah, another resident who reached an agreement, said that he is still staying at the Holiday Inn on Summer Street but he is able to move his belongings to a friend’s basement. He had already moved some belongings before coming to court Thursday.

Asamoah is collecting his other belongings Friday.

Coming to court has been stressful for Asamoah, who had to miss work.

He also intends to take Fren Management to court for any means that his lawyer would advise him to. He said he was also confused with Fren Management bringing the tenants to Housing Court.

“It should be the other way around because we didn’t cause it,” Asamoah said. “Indirectly they did it.”

Asamoah said he believes in the legal process and thinks some progress was made for him Thursday.

What does the threat of war between China and Taiwan mean for procurement?