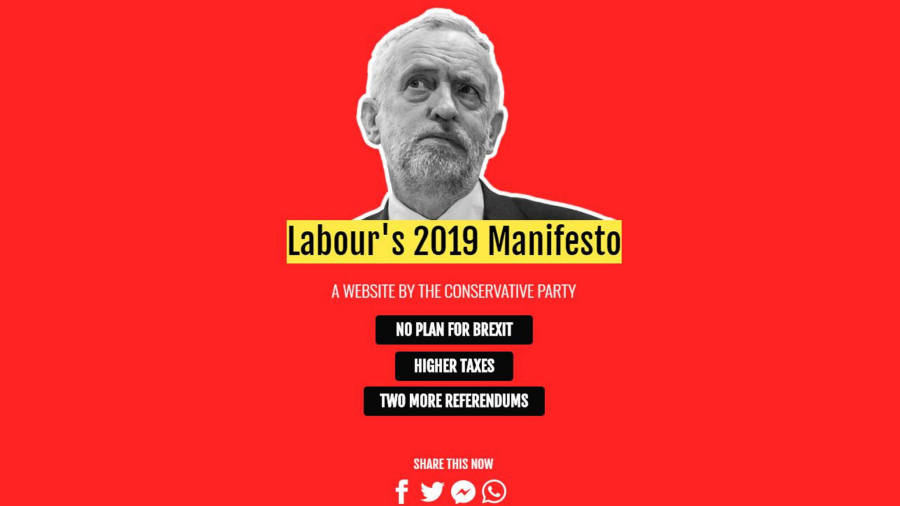 Tech companies are having a hard time traversing the political minefields of elections looming in the UK and US.

Apple is under fire for allowing President Trump to get away with campaigning boosterism on a visit to a facility in Texas on Wednesday. Fabs are the shortened name given by the chip industry for their fabrication plants, but President Trump perhaps had a different kind of fabrication in mind when he tweeted: “Today I opened a major Apple Manufacturing plant in Texas that will bring high paying jobs back to America.”

As numerous fact-checkers have pointed out, only “Today . . . in Texas” can be verified in that sentence. There is no manufacturing done by Apple there: it is an assembly plant run by Flex (formerly Flextronics) and the president did not open it, it has been putting together Mac Pros there since 2013.

Meanwhile, Google has updated its political ads policy. Political advertisers will no longer be able to target users narrowly through their characteristics such as interests or email addresses, reports Hannah Murphy from San Francisco. Google said it would introduce the rules in the UK within a week, ahead of the December 12 election. The changes will come into force in the EU by the end of the year, and in the rest of the world from January 6 2020. Facebook is planning a similar move, according to the Wall Street Journal.

Finally, Twitter has had to reprimand the UK’s Conservative Party for changing the name on its account to factcheckUK, with the handle “Fact checking Labour from CCHQ”. Twitter said it had breached its policies on deception and would be punished if it did so again. As Seb Payne explains, the Conservative digital campaign has a “move fast and break things” Facebook quality to it, where “80 per cent of the content will hit the mark, 20 per cent will miss or blow up”. In this case, and perhaps with its latest stunt — a spoof Labour Party website — the truth appears to have been blown up in the process.

The Internet of (Five) Things

1. Xerox set to fax hostile HP bid
Xerox has given HP an ultimatum in its effort to acquire the equally ancient PC and printer maker, threatening to turn its bid into a hostile one unless the company agrees by next week to pursue a “friendly combination”. HP turned down the $22-a-share bid on Sunday, saying it “significantly undervalues” the company.

2. World Chess ponders digital token move
World Chess has announced plans for a novel “hybrid initial public offering”, where it will raise funds by first issuing a digital token before floating on London’s junior stock market next year, as it ramps up efforts to commercialise the age-old board game.

3. PayPal’s $4bn beeline for Honey
PayPal has unveiled its most ambitious attempt yet to move beyond its core payments business, announcing the $4bn acquisition of deal-finding company Honey. The purchase — the biggest in PayPal’s history — will bring the company a new source of data and insights into online shopping behaviour, says Richard Waters, paving the way for it to reach deeper into online purchases and offer a wider range of services to consumers and merchants.

4. China’s “everything app” earnings have it all
Uber may want to be your everything, but Meituan Dianping seems to have already got there in China. The “everything app” beat expectations with a 44 per cent rise in sales during the third quarter. Meituan has become the third-biggest listed Chinese tech company by market capitalisation this year on the back of its superapp for Chinese consumers. It brings together everything from food delivery to restaurant ratings, hotel bookings and at-home massage services. Also, China’s fastest-growing ecommerce site Pinduoduo posted 123 per cent sales growth in its latest quarter, narrowly missing market expectations, with its losses more than doubling.

5. Tesla keeps on trucking
Tesla will finally unveil its electric pickup truck in Los Angeles this evening, a product Elon Musk says he is the most excited about. His recent announcement that Tesla’s first European factory would be in Germany took the industry by surprise. But the deal was in the works for months, the result of a courtship by local officials that included a ride in a 44-year-old Russian biplane. UK Lib Dem deputy leader Ed Davey writes in the FT that the move demonstrates the damage caused by Brexit.

European tech start-ups won a record $34bn in venture capital funding this year, up 40 per cent from 2018, outshining the Asian and US markets, which saw a dip in investment. The sharp jump, highlighted in Atomico’s latest report on the State of European Tech, adds to a growing sentiment that the European tech ecosystem is finally coming of age. “It does feel like we are in a golden age for Europe now,” said Sonali de Rycker, partner at venture capital fund Accel. “The quality of talent, the level of ambition and availability of capital are at a completely different scale.”

Meanwhile, this week saw the great and the good of European (and global) tech descend on Helsinki for the annual Slush conference. But for Finland, it’s more than just a conference. The volunteer-powered start-up gathering has become something like a nationwide tech accelerator; a breeding ground for Finland’s new wave of tech start-ups such as Wolt, Smartly and Blok, as well as a cultural event which has inspired a generation of founders. Just don’t talk about the controversial communal saunas. Elsewhere Russ Shaw from Tech London Advocates argues that the UK needs to copy the French start-up visa programme as the UK one is failing and Spanish start-up SamyRoad talks about the boom of influencer marketing and the opportunity for new agencies in Europe.

Those Dash reordering buttons may have been discontinued, but Amazon has just introduced a smart shelf that knows when supplies are low and automatically reorders them, reports Geekwire. “The Dash Smart Shelf is a WiFi-enabled scale for office supplies. When common supplies like printer paper, pens, or coffee are running low, the shelf can automatically restock them or send a notification to put in a manual order.” The black scales are only an inch tall and come in three sizes.