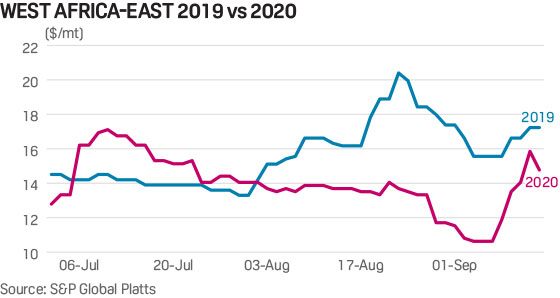 The fourth quarter has traditionally been referred to as the strongest quarter for freight markets, with factors such as winter heating needs in the northern hemisphere and agricultural exports following harvests in key regions, coupled with bad weather and ice tying tonnage up. However, Q4 2020 is looking less positive for shipowners, as discussed in S&P Global Platts’ shipping special report,  Changing Tack. In this extract from the report, Charlotte Bucchioni looks at what’s in store for tanker markets in the coming months.

Bearish tanker markets are likely to roll over to the fourth quarter amid limited signs of recovery in oil prices and structural oversupply weighing on spot markets.

While oil demand improvement over the fourth quarter will lend some support to the spot market and bring rates further away from operational fixed costs (OPEX), expectations for another forlorn quarter gather pace.

Short spikes can be expected in the coming quarter amid supply-tightening factors combining at once and storage inquiries picking up. Such spikes have already been seen towards the end of the third quarter when rates picked by 49% week on week to reach $15.85/mt on Sept. 11 on the West Africa-to-East 260,000 mt run.

However, unsupportive fundamental market conditions of plentiful storage and limited end-user demand mean spikes are likely to be short-lived.

The third quarter of 2020 has given a clear snapshot of the structural weakness in the dirty tanker market, or its oversupply in tonnage.

Coupled with OPEC+ production cuts coming in full swing, spot market rates plunged to $13.95/mt over the third quarter on the 260,000 mt West Africa-to-East run from a secondquarter average of $30.31/mt. 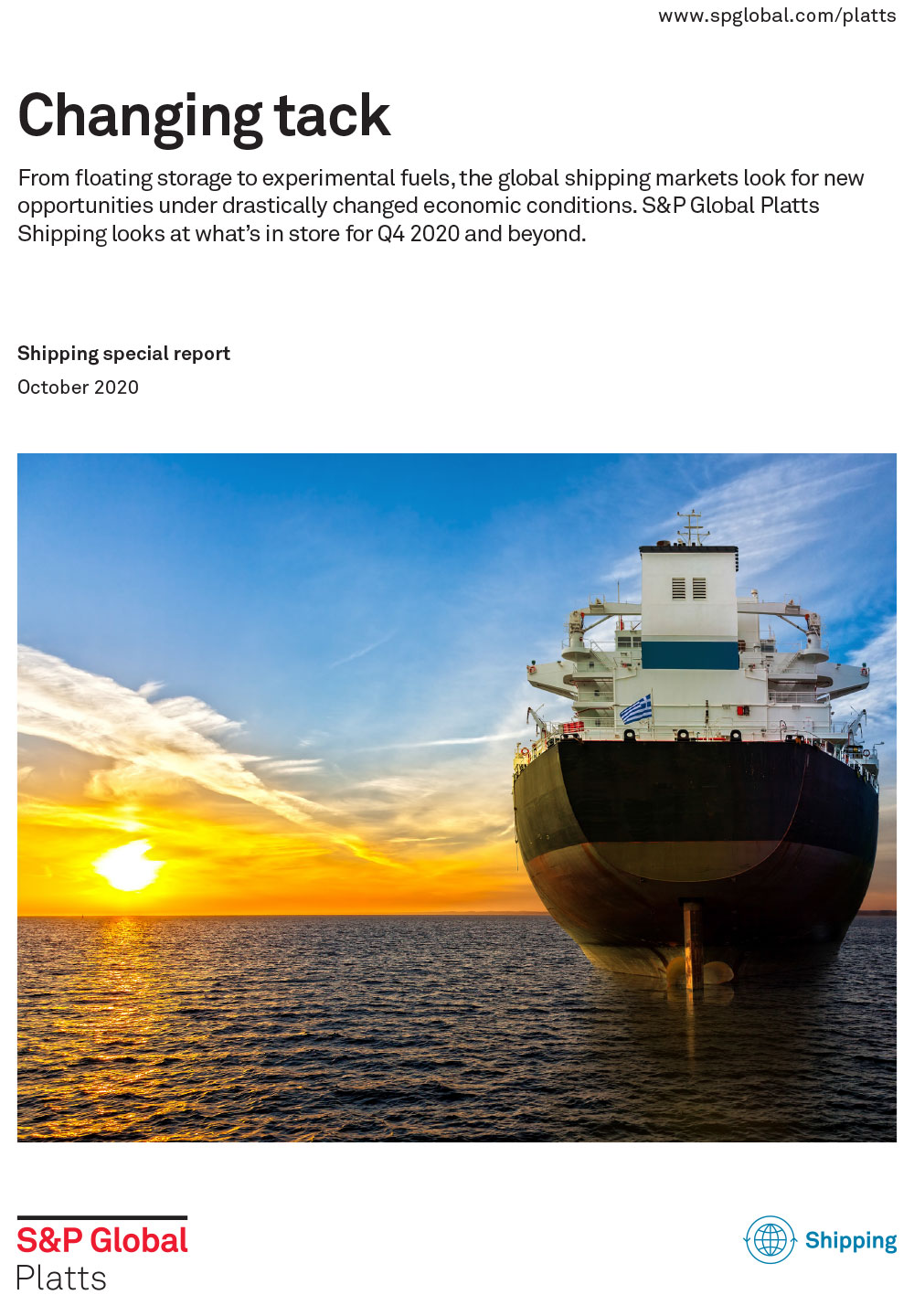 VLCC volumes across the principal West of Suez eastward trade lanes in August fell 27% year on year from West Africa and 66.7% from the North Sea, according to data intelligence company Kpler.

The Mediterranean market in particular has suffered from overtonnage, with freight rates ticking lower than OPEX levels in August. Ton-mile demand in the Mediterranean and Black Sea basin fell to 26,715 mt per nautical mile over the third quarter of 2020, or a 58% decrease year on year, according to Kpler data. 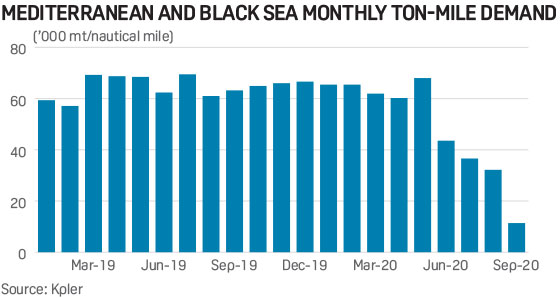 Normalizing oil production and demand in the fourth quarter will maintain freight rates stable at slightly higher levels, especially if more tonnage is tied into floating storage and Libyan production continuing to flow into the market.

While the outlook for Libyan production remains uncertain, oil demand rose by 1.1 million b/d in August to 91.7 million b/d, and will continue growing by 540 million b/d every month over September-December according to the International Energy Agency. While this will some lend support to freight rates, spot markets are likely to continue competing with stock draws.

A number of VLCCs were reported booked for floating storage amid unsold production and a widening contango. A couple of Suezmaxes were also heard booked in the East, but the contango did not lend enough support West of Suez, said a Suezmax broker. However, time charter rates remain much weaker than throughout this year’s second quarter.

Trafigura was reported to have booked at least eight VLCCs during the first half of September for time charters of between six and eight months, and period rates were cited between $20,500/d and $42,000/d depending on the ship’s age and charter duration. This is down from an average of 120,000/d to 130,000/d for a six-months charter in late April.

Aside from the crude market structure, more floating storage is expected amid a Nigerian crude supply overhang. However, whether owners will be able to command considerably higher rates is uncertain given time charter deals have replaced very expensive ones fixed in March and April.

While the outlook for the coming years is for a supply and demand balance given the order book is the lowest since the 1990s and the phase-out potential is the biggest since the single-hull phase-out of the early 2000s. Yet, the closing quarter of 2020 remains uncertain given scrappings have been delayed.

Since September 2017, the Ballast Water Management Convention mandates that ships built before Sept. 8, 2017, should be in possession of the IOPP survey to postpone the installation of a ballast water management system.

At the start of 2020, around 100 tankers aged above 15 years were in possession of expiring IOPP certificates, making them candidates for scrapping as the high costs of installing a ballast water management system remains a loss-making choice. However, while demolition prices have recovered from year lows of $260/Ldt in Pakistan mid-May to $320/Ldt in early September, owners might still continue delaying scrapping as they remain attentive to floating storage developments. This is particularly relevant as older tonnage tends to be pushed by owners as floating engines, given the reluctance to tie modern tonnage and forgo a potential strong winter market.

How IBM Is Using Blockchain Technology