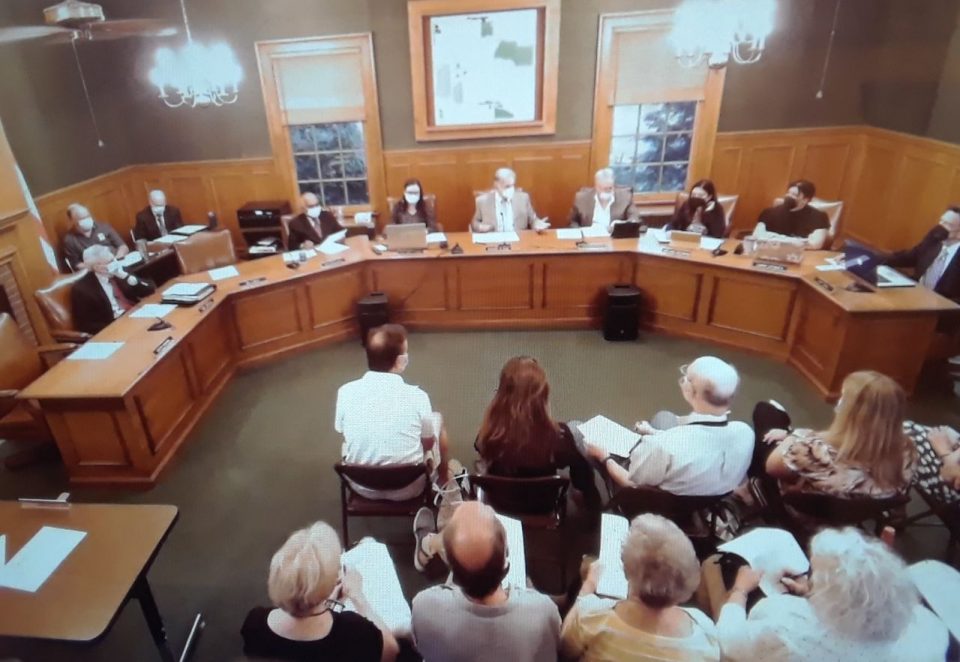 PEPPER PIKE, Ohio — As is the case with so many construction projects these days, supply chain difficulties and the availability of materials has led to a cost increase for the Shaker Boulevard sanitary sewer project.

At a public hearing/special council meeting Monday (Aug. 8) to discuss the project’s cost, Mayor Richard Bain said the 85 homeowners who live along Shaker Boulevard will not be made to pay, via assessments, for $1 million in cost increases.

Instead, Bain said, the city will use more than $600,000 in federal American Rescue Plan Act (ARPA) money it is receiving, along with $350,000 in city funds, to pay the higher bill.

“Our recommendation is the city absorb that $1 million and not pass it on to residents,” Bain said. He said the city is in good financial condition and is capable of handling the added cost.

The city has already received a Northeast Ohio Regional Sewer District (NEORSD) grant in the amount of $1.442 million, which will help pay for a large portion of the project.

Impacted Shaker Boulevard residents, who now use septic systems, are being charged an assessment to pay for the remainder of the project’s bill and will also have to pay to connect to the sanitary sewer being installed.

The city will also chip in by paying $5,000 toward the cost of connection. Bain said connection costs will differ based on where homes are located.

“Some of the bids came back much higher than was ever anticipated at the time the project was being estimated,” Bain told council and Shaker Boulevard residents who filled the small council chamber.

“The key thing for many of you assembled here this evening is, what does this mean in relation to the assessment the city previously announced to you?”

Shaker Boulevard residents will be made to pay a bit more for the work.

The city had previously told the residents that each would pay a $14,215 assessment for their share of the project, not including the cost of connecting to the sanitary sewer. Adding 15 percent to that amount will bring the new assessment to residents to $16,348.

Because residents have up to 20 years to pay the assessment, the added cost amounts to less than $100 per year.

“The residents are being assessed a total of an additional $183,384 — 15 percent more than the estimated assessment total, or about $2,132 (more) per household,” Bain explained after the meeting.

“The original estimate for the resident assessment had a provision that the estimate was subject to up to a 15 percent increase.

“When Pepper Pike council moved forward with bidding of this project, the estimated assessment for each household for the sanitary sewer improvements was set at $14,215.79,” Bain said.

“At that time, the maximum amount of additional assessment that the city was willing to assess to the residents was announced at 15 percent above this estimated assessment, which would increase the total assessment to $16,348.15, or an increase of $2,132.36.

“We are remaining true to what we told the residents. That cap is still the maximum amount that is recommended each property be assessed.

“What’s important,” Bain told residents during the meeting, “is that your assessments are going to be in that range originally told to you that they’d be in.”

City Engineer Don Sheehy said bids were received from only three of the seven qualified bidders who took out bid specifications for the project. The winning bid, from Fetchko Excavating, for $4.92 million, received council’s approval Monday.

Sheehy said that bid amount covers the costs of storm sewer and pump station work, in addition to the sanitary sewer project.

Residents are not being assessed for the storm sewer and pump station portion of the contract.

Sheehy noted that the winning bid was well above his estimate, and said, “Materials costs are up, hauling costs are up and the contractors are, quite frankly, all busy. There’s a lot of work out there and not enough contractors to do it, and they’re struggling to even find materials for some of these projects.

When resident Seth Wolf asked if it would be better to hold off on the project for perhaps 18 months, when costs might be lower, Sheehy said he did not expect costs to decrease significantly by then.

Bain said the city has been sitting for two years on its NEORSD grant and must use it soon or lose it. He said the NEORSD has $15 million in grant money available each year to dispense among area communities.

“They (NEORSD) have, over the next five years, between $900 million and a billion dollars of applications (from various communities) for that $15 million a year,” he said. “This is an extraordinarily competitive process for us ever to get grants.”

Sheehy said materials cost are high, and construction companies are having to pay $6 to $7 per hour above prevailing wages to get laborers to come to work.

“Work’s not going away and there’s not enough people to do it,” Sheehy said. “I don’t see prices coming down in any significant way in the short term, near term. In 18 months, they (prices) could be where they’re at now — or higher. I just don’t have the confidence that prices are going to drop.”

Sheehy said that if materials are available, the project would start in January and be completed by October 2023.

This is the first part of a two-phase project along Shaker Boulevard. It entails homes on the boulevard from just east of Bollingbrook Road east to Pepper Pike Creek Drive.

Headlines: Street Vendor Advocate Gets a Haircut to Show Support; A Doctor Claims DEA is Making Up ‘Rainbow Fentanyl’