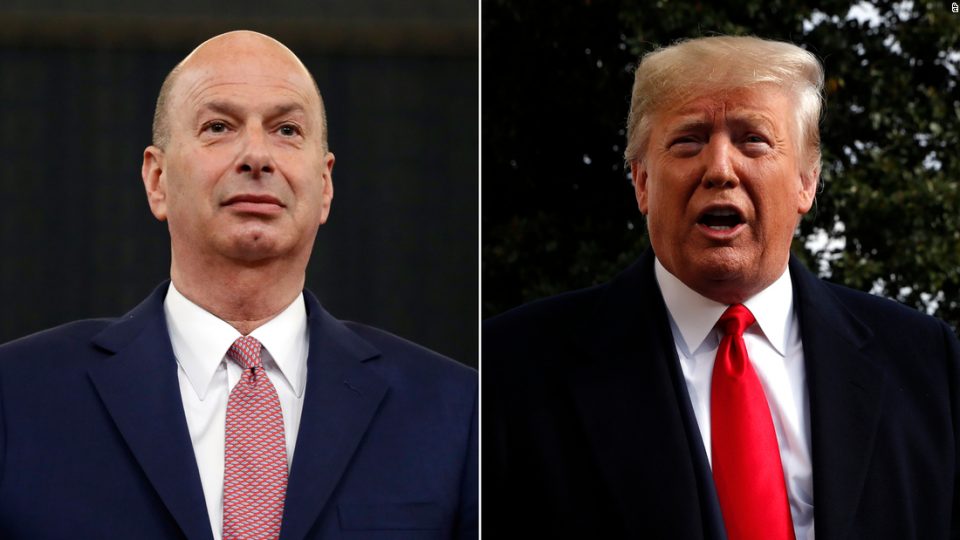 This was no “Never Trumper” bureaucrat perpetrating what some of the President’s conservative backers have called a coup. He was a glad-handing businessman who paid $1 million to Trump’s inaugural committee and ended up with a plum job.

Sondland destroyed once and for all the earliest presidential talking point that there was no quid pro quo with Ukraine. He explicitly said the prospect of a White House visit for Ukrainian President Volodymyr Zelensky was conditional on Ukraine announcing an investigation against Trump’s possible 2020 rival Joe Biden.

“I know that members of this committee frequently frame these complicated issues in the form of a simple question: was there a quid pro quo?” Sondland said.

“As I testified previously … the answer is yes.”

And Sondland broadened the scope of the conspiracy — testifying that Secretary of State Mike Pompeo, Energy Secretary Rick Perry, Vice President Mike Pence and acting White House Chief of Staff Mick Mulvaney all knew what was going on.

“Everyone was in the loop,” said Sondland.

Testimony by Sondland — the most anticipated impeachment witness so far — came on the penultimate day of the currently scheduled televised hearings that built a new wall of facts against the President and will wrap up on Thursday with testimony from witnesses including former White House adviser on Russia, Fiona Hill.

On the face of it, this was a disastrous day for Trump.

Yet the President declared total victory in the face of a factual defeat. Conservative media and Trump’s Republican allies seized on the inconsistencies in Sondland’s testimony. Their reactions made Wednesday’s revelations seem unlikely to shatter Trump’s political base, which is almost certain to prevent GOP senators deserting him.

The President seized on a comment by Sondland in which he said Trump told him he didn’t want a quid pro quo with Ukraine, despite a pattern of backdoor diplomacy that appeared to be demanding just such a concession.

For the President, despite hour upon hour after devastating testimony, that was enough.

“If this were a prize fight, they’d stop it!” he declared in a tweet.

But in any version of reality outside of the Trump bubble, Wednesday’s dramatic events took the impeachment saga into a more foreboding phase and leaves critical players including Trump, his Republican defenders and Democratic investigators faced with important strategic decisions.

The US envoy to Europe, a forgetful witness at times, still dismantled the foundations of Trump’s impeachment defense.

He erased any idea that the scheme to go around traditional US diplomats and pressure Ukraine’s rookie president, Zelensky, was a black diplomatic operation dreamed up and largely run by Trump’s personal lawyer Rudy Giuliani.

Sondland said he and other senior officials worked with “Mr. Rudy Giuliani on Ukraine matters at the express direction of the President of the United States.”

House Intelligence Committee Chairman Adam Schiff told reporters midway through the hearing that Sondland’s testimony “is among the most significant to date.”

“It was the conditioning of official acts or something of great value to the President these political investigations it goes right to the heart of the issue of bribery as well as other potential high crimes or misdemeanors,” Schiff said — apparently all but guaranteeing House Democrats will go ahead and make Trump the third President to be impeached.

As the dust settles from Sondland’s testimony, the Democrats, given their House majority, are in the driving seat.

They now have testimony from inside the heart of the plot that sheds damning new light on the transcript of the July 25 call between Trump and Zelensky.

The question will be whether they can distill a concise, effective indictment of the President that will move Americans comprehensively against him. While their hopes of getting Senate Republicans to ditch Trump may be hopeless, they are also playing for the 2020 presidential election and are trying to grab back the Senate itself.

Each Washington scandal unfolds against the backdrop of every previous one. The scale of Trump’s impeachment saga is drawing increasing parallels to Watergate, that doomed Richard Nixon.

Sondland was in no sense one of the President’s Men ready to sacrifice himself in a bid to shield his boss. He was reasonably open and blew the lid off the back-door scheme to pressure Kiev. He clearly had no appetite to follow the fate of Trump acolyte Roger Stone who was recently convicted of lying to Congress.

His testimony essentially offers Democrats validation for moving ahead with impeachment — a significant political risk in itself.

And it was a reward for a process that has laid building blocks of a case started with a black diplomatic initiative before moving closer and closer to the President himself.

“This is a seminal moment in our investigation,” Schiff declared after Sondland left to go back to Europe.

Democratic leaders now face new questions raised by his testimony. Given his evidence implicating Giuliani, Pence, Pompeo and outgoing Energy Secretary Rick Perry, is it incumbent for the legitimacy of the probe to make a new effort to secure testimony from officials who are refusing to appear.

Democrats have wanted to avoid a long court showdown that would stretch the impeachment drive for months, could test the public’s patience and could bleed into 2020 primary season.

An attempt to at least give the impression of pursuing other officials could take the unofficial timetable that seeks a full House impeachment vote before Christmas into next year.

Trump quickly reacted to Sondland’s testimony by characteristically denying he knew his Europe envoy well — despite the fact that the star witness boasted about their expletive-laden phone calls.

They seized on Sondland’s statements that the President did not direct him personally to withhold military aid to Ukraine in return for an announcement of a probe against Biden.

And while he admitted that there was a clear scheme to demand a quid pro quo for an Oval Office meeting for Zelensky, Sondland did not quite as far on the $400 million in military aid that was mysteriously held up by the President.

He said he presumed that the aid was held up for the same reason as the meeting — and expressed the concern about the possibility to Pence on September 1.

“Ambassador Sondland’s testimony made clear that in one of the few brief phone calls he had with President Trump, the President clearly stated that he ‘wanted nothing’ from Ukraine and repeated ‘no quid pro quo over and over again.’ In fact, no quid pro quo ever occurred. The U.S. aid to Ukraine flowed, no investigation was launched, and President Trump has met and spoken with President Zelensky. Democrats keep chasing ghosts,” Grisham said.

Her statement was a blueprint for Trump’s Republican and media friends.

But it contained inconsistencies in itself.

Evidence suggests that while Trump told Sondland that he didn’t want a quid pro quo, such a statement is not the same as not demanding one. Threatening to withhold aid for political favors can be an abuse of power in itself. And the military aid only started flowing on September 11 when it was clear that Democrats were investigating why it had been held up following a whistleblower’s report.

Trump’s own call with Zelensky on July 25 actually shows him asking his counterpart in Kiev for a “favor” immediately following a discussion of US military hardware that Ukraine hopes to acquire.

Sondland’s testimony caused an immediate headache for officials such as Pence and Pompeo — who are getting more and more dragged into the Ukraine mess.

The vice president on Wednesday tried to put out the fire in an interview with a local television station in Wisconsin saying he didn’t “recall” a conversation with Sondland in Poland on September 1.

This Year Was A Disaster For The Planet