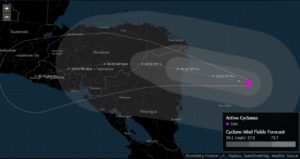 Hurricane Iota is set to slam into Central America Monday as the Atlantic’s strongest storm of the year, bringing catastrophic winds and torrential rain to a region still reeling from a storm two weeks ago.

It will hit near the Honduras-Nicaragua border on the heels of Hurricane Eta, which killed more than 100 people. Iota’s winds reached 160 miles (257 kilometers) per hour Monday morning, making it a Category 5 storm — the strongest on the five-step Saffir Simpson scale, the National Hurricane Center said. A hurricane that powerful can crush homes, snap trees and make areas uninhabitable for months. Iota, which could drop 20 inches of rain on the region, will likely make landfall after 8 p.m. New York time.

“Iota is forecast to continue to be a catastrophic category 5 hurricane when it approaches Central America tonight, and rapid weakening is expected after landfall,” Eric Blake, a meteorologist at the center, wrote in his outlook. “This rainfall would lead to significant, life-threatening flash flooding and river flooding, along with mudslides in higher terrain.”

Iota is the 30th named storm in the Atlantic this year, a record. The hyperactive hurricane season is part of a string of natural disasters in 2020, including deadly wildfires in the western U.S. and a derecho that left wreckage from Iowa to Indiana. They’re further evidence that the Earth’s climate is changing, threatening to bring more widespread devastation.

This is the first time the Atlantic has produced two major hurricanes — Category 3 or stronger — in November, according to a tweet by Phil Klotzbach, lead author of the Colorado State University seasonal forecast. Iota is the first storm to reach Category 5 strength so late in the year, he said.

Iota could create additional problems for coffee and sugar crops in the region, which were drenched by heavy rains and flooding from Eta two weeks ago, said Don Keeney, a meteorologist with commercial forecaster Maxar. Honduras is the top coffee grower in the region, followed by Guatemala, which is the biggest cane-sugar exporter in the area and a key supplier of the sweetener in the world.

Guatemala’s ports have already slowed due to heavy rains and an ongoing La Nina weather pattern in the Pacific, and Iota “could complicate” things, Michael McDougall, managing director for Paragon Global Markets, said in an emailed note.

While Iota’s winds could fluctuate as it comes ashore, it won’t really matter because widespread damage is inevitable now, said Dan Kottlowski, a meteorologist at commercial forecaster AccuWeather Inc.

“This is a humanitarian disaster in the making,” Kottlowski said.

Thousands have already evacuated in Honduras and Nicaragua, and Guatemala is preparing emergency food kits. The storm will devastate the coastal areas with high winds and deadly storm surge before wringing out flooding rains across the mountains of Central America for the next four days.

So many systems have formed in the Atlantic this year that the National Hurricane Center used up its official name list in mid-September and resorted to using Greek letters to designate tropical cyclones. There is a 30% chance another storm could develop off the coast of Central America in five days.

Want to stay up to date?

Get the latest insurance news
sent straight to your inbox.

Shifting the Curve: Strategies for Balancing Lean and Resilience