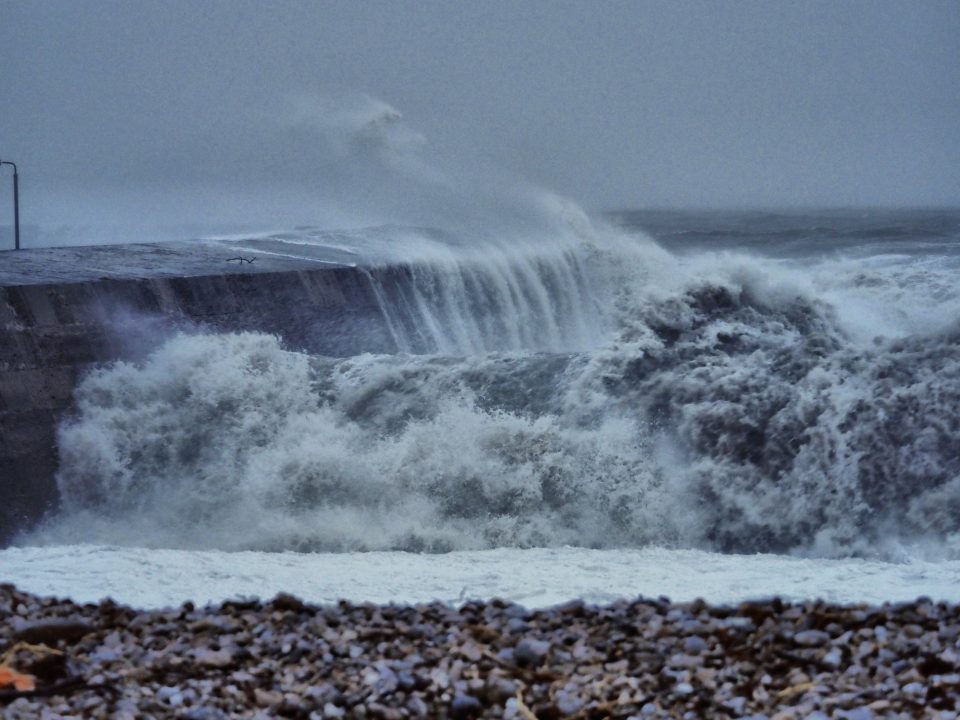 A WEATHER warning for Storm Ciara has been upgraded to amber.

Strong winds and rain hit the county this morning, which foreecasters say could cause damage to buildings and major travel disruption.

The Met Office is also warning of possible power cuts and a risk to life from large waves in coastal areas.

High tides and strong winds associated with the storm will affect the area from this morning.

Consequently, flooding is possible for the duration of the strong winds along the whole of the west Dorset coast but particularly focused at Lyme Regis, West Bay and Chiswell.

The highways team from Dorset Council and the Environment Agency say they will be monitoring Portland Beach Road during the day and may need to close the road if there’s a danger from flying pebbles and spray.

The flood alert is in place for high tide on Sunday at 6.45am and 7pm and on Monday and 7.15am as well as the two hours either side.

Flooding of properties is not forecast at this point, though high tide levels may prevent rivers from flowing to the sea and cause rivers to rise.

The Environment Agency says it is closely monitoring the situation, and has warned the public to be careful along beaches, promenades and coastal footpaths and roads.

The Met Office has issued a wind weather warning for Sunday. There will be very strong winds, with some rainfall from midnight Saturday night, throughout Sunday and possibly into Monday morning.

The forecast for winds on the coast is from gale force seven up to severe gale force 10. The wind will reach gusts of 60-75mph.

* Service suspended on Sandbanks Ferry between Studland and Poole due to adverse weather conditions.

* Bath Road is blocked due to a fallen tree between New Street (Marnhull) and B3091 Old Market Hill (Sturminster Newton).

* Services at a standstill on South Western Railway between Fareham and Southampton Central due to fallen tree on the line.

* No service on CrossCountry between Reading and Bournemouth due to adverse weather conditions.

* Services at a standstill on Great Western Railway between Farnborough North and North Camp due to fallen tree on the line.

* Reports of slow traffic due to accident on A37 both ways near Saxon Arms Pub turn-Off.

* Service suspended on Red Funnel between Southampton and West Cowes due to adverse weather conditions.

Dorset Council is asking people to stay away from cliffs and be careful on beaches at high tide when there is a possibility of large waves.

Cllr Ray Bryan, Dorset Council portfolio holder for Highways, Travel and Environment, said: “We want residents and visitors to stay safe and well. With winds this strong there is a possibility of risk to life along the coast.”

Inland the wind is not expected to be as strong, up to 55mph, but this may cause some travel disruption falling trees and flying debris. Make sure garden furniture is secure. Trees may also take power lines down in places.

The prolonged spell of wet weather has led to ground being saturated, so the rain on Sunday may cause short term localised flooding. So, drivers should be aware of the weather conditions and check routes before starting their journey.

The weather warning is in place until midnight on Sunday, but the windy weather may continue into Monday.

Lyme Regis Coastguard has issued a warning ahead of tomorrow.

A spokesman for the coastguard rescue team said: “With Storm Ciara on it’s way over the weekend. We ask that you take extra care near the coast. High winds and Tides can be very dangerous, Please dont take risks just for a picture.
Always stay a safe distance away and keep your family safe too.

“IF YOU NEED ASSISTANCE OR SEE SOMEONE THAT DOES CALL 999 AND ASK FOR THE COASTGUARD.”

Highways England has extended its warning to drivers to take care and be prepared for strong gales that have the potential to disrupt journeys.

Road users, particularly drivers of high-sided HGVs, caravans and motorcycles, are advised to check the weather and driving conditions before setting out on journeys and pay particular attention to exposed locations such as coastal and high lying areas and bridges which could be affected by the high winds.

Strong winds will be widespread and last throughout most of Sunday. Gusts of 60 to 70mph are likely across many inland areas and around 80mph in exposed coastal areas. A spell of heavy rain will affect many regions for a time, making driving conditions particularly poor.

Highways England’s Head of Road Safety, Richard Leonard, said: “We’re encouraging drivers to check the latest weather and travel conditions before setting off on journeys and consider if their journey is necessary and can be delayed until conditions improve. If you do intend to travel, then plan your journey and take extra care, allowing more time for your journey.

“In high winds, there’s a particular risk to lorries, caravans and motorbikes so we’d advise drivers of these vehicles to slow down.

“Drivers of other vehicles should be aware of sudden gusts of wind which can affect handling and braking, and give high-sided vehicles, caravans, and motorbikes plenty of space. In the event of persistent high winds we may need to close bridges to traffic for a period, so please be alert for warnings of closures and follow signed diversion routes.”

Richard Leonard added: “Curtains on empty high-sided vehicles can act as sails when closed, and when high winds arise, we advise HGV drivers to open their curtain-sided vehicles if they are empty.”

A Freight Transport Association advisory states “When driving an empty curtain-sided vehicle, tie both curtain sides at one end of the vehicle to reduce the effect of side winds”.

HGV drivers are advised by the DVSA to check load security as part of their daily walkaround check. Further details of the walk around check can be found on GOV.UK.

Road users are being advised to follow messages on any overhead signs and listen to radio updates. Further information can be found by visiting  www.trafficengland.com or calling Highways England on 0300 123 5000.

Highways England is advising drivers to pay attention to messages on the overhead electronic signs and listen for radio updates. Further information can be found by visiting www.trafficengland.com, following the regional Highways England Twitter feeds, or by calling Highways England on 0300 123 5000. The latest weather forecast can be seen online at www.metoffice.gov.uk