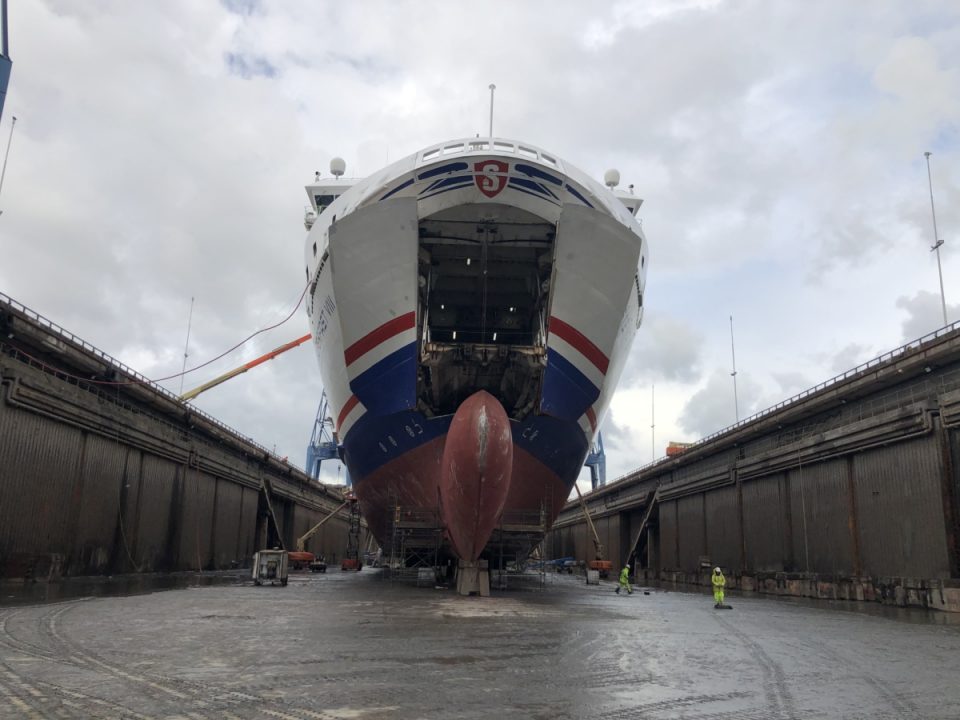 As ‘Stena Adventurer’ arrives in Belfast, we take a quick look at some fleet movements involving the Stena group of companies during October.

The ship is currently timetabled to return to service with the 02:30 ex Holyhead on November 2. Her visit is believed to be for work on her stabilisers, which was started in Dunkerque earlier in the year, to be completed.

Covid-19 restrictions mean that passenger demand on the Holyhead – Dublin route remains lower than normal, though freight demand is understood to remain strong.

Having arrived on loan from Stena Line Scandinavia, STENA VINGA settled into a freight-only relief role on the Rosslare – Cherbourg route.

The two Belfast-based sister ships dry-docked in turn at Harland & Wolff as expected, though returned to service later than originally reported. As above, STENA ESTRID provided cover during their absence.

Stena Line has kindly supplied some pictures (below) of STENA SUPERFAST VIII in dry-dock.

TV presenter Dom Littlewood also visited the ship while in dry dock to film an episode of his upcoming series ‘Dom Dig’s In’.

With STENA ESTRID no longer required as relief cover at Belfast, she sailed for Holyhead after covering the (45 mins late) 19:30 sailing from Cairnryan on Thursday (Nov 22).

While largely successful, STENA ESTRID‘s spell on the North Channel has been dogged by delayed sailings. Many of these delays are believed to have been caused by fit problems at the berth at Belfast VT4. STENA SUPERFAST X also had similar issues in the past.

Stena Line has confirmed to us that STENA MERSEY will stay in service on the Belfast – Liverpool route until she is released by her brand-new replacement STENA EMBLA.

‘Mersey’ currently sails on the route with STENA EDDA and the chartered Ro-Ro SEATRUCK PANORAMA. Once released from the Birkenhead – Belfast route, ‘Mersey’ will sail to SEDEF Shipbuilding for lengthening and rebuilding before joining STENA LAGAN on the Nyanshamn – Ventspils route. Stena Line has confirmed that both ships will be renamed for their new service.

Having eventually returned to Poland from the Irish Sea (via brief service on Ventspils – Nynashamn), STENA NORDICA is dry docking at Remontowa Gdansk. Once completed, she will release STENA BALTICA from the Karlskrona – Gdynia route. This will allow ‘Baltica’ to will return to Brittany Ferries.

Brittany Ferries previously had plans to potentially rebuild the ship, previously named COTENTIN. These plans are understood to be on ice for the foreseeable future due to financial pressures brought on by the COVID-19 pandemic.

The Ro-Ro freighter STENA FORETELLER, which was on charter to Irish Ferries earlier this year, has been chartered to NMT for Europe – Africa service for an unspecified time. She is currently off Conarky (Guinea).

STENA FORETELLER had been laid up at Uddevalla, along with sister-ship STENA FORECASTER as well as STENA SAGA, and SASSNITZ, following completion of her Irish Ferries charter. STENA SAGA and SASSNITZ remain laid up at the port and are both believed to be for sale.

The former Belfast – Liverpool freight ship is widely expected to replace MISIDA on P&O Ferries Liverpool – Dublin service later this month. This has not yet been confirmed by P&O.

At present STENA FORECASTER is in dry dock at A&P Tyne (Hebburn). MISIDA has been chartered to SeaCargo from next month.

The latest E-Flexer to be completed, and the fourth in the series, is back at her builders yard in Weihai for finishing touches to be applied.

Once delivered, she will transfer to Stena Line before entering service on the Irish Sea early in the new year.

What we are doing to professionalise ports industry — Shippers’ Council boss