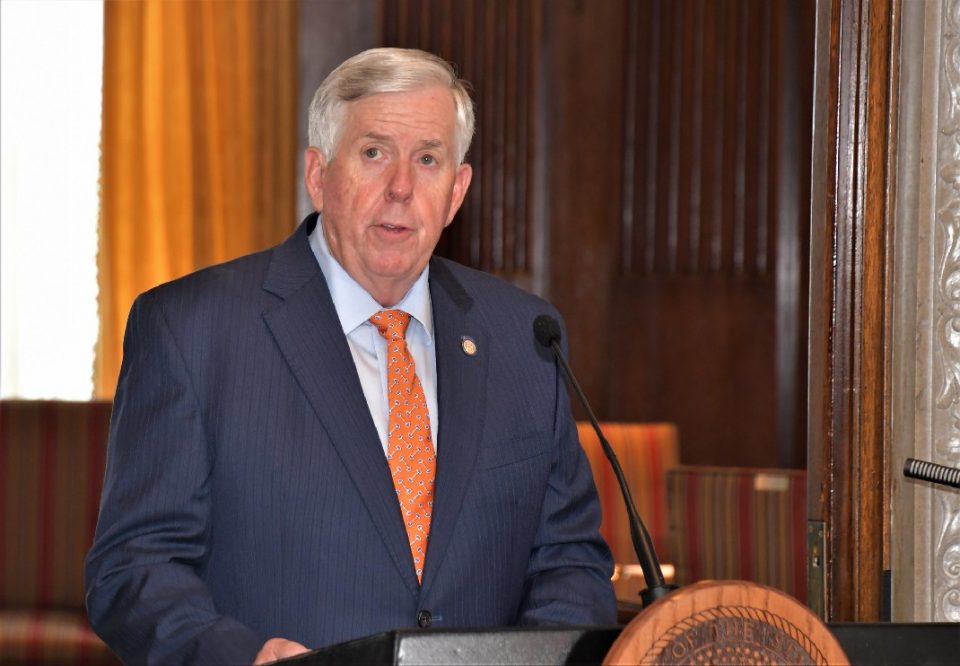 While there is not yet a vaccine approved to be used against COVID-19, Missouri leaders announced Thursday the state is ready for when that moment comes, with the state having submitted its vaccine distribution plan to the federal government.

Gov. Mike Parson said the state’s plan was submitted Thursday afternoon to the Centers for Disease Control and Prevention.

State health director Dr. Randall Williams said the CDC will give feedback by Oct. 26 on the plan, but there won’t be formal approval of the plan given by the agency.

Williams said there are four candidates for a vaccine in development — three of which require cold storage in temperatures such as 70 degrees below zero, and more than one dose.

He said the hope is a vaccine will be available by late November or early December, with general availability for the public by April.

In the meantime, the limited amounts of vaccine that will be available initially will be reserved for critical and high-risk groups of people.

The first phase begins with people essential to other people’s care — such as health care workers — the second phase expands to more groups of people, and the third phase is general availability, “through drive-thru clinics, gyms, individual providers,” he said.

He added the state is guided by wanting to get vaccine to people who are most at-risk of death and complications from comorbidities — which also includes people who work with vulnerable people, such as long-term care facility workers.

Comorbidities are underlying chronic health issues or conditions that put people at more risk for serious illness from the coronavirus that causes COVID-19.

According to the state’s plan released Thursday, the first phase of distribution would itself be broken into two parts. The first half, 1A, would focus on vaccinating “unpaid and paid health care workers.”

In the second half of the first phase of distribution, 1B, vaccination would be expanded to include “critical infrastructure workers and Missourians at higher risk for COVID-19 disease identified by the CDC established comorbidities for COVID-19.”

The state would work with “local health care providers, community organizations, their partners and local public health agencies” to perform phase 1B vaccinations where possible.

The second phase of vaccine distribution would be intended to “Secure the critical infrastructure of Missouri and accelerate economic recovery within the state,” according to the plan.

That includes vaccinating anyone among priority groups missed in the first phase, as well as vaccinating “populations at increased risk of acquiring or transmitting COVID-19. These populations of consideration include racial and ethnic minority groups, housing-insecure individuals, people living and working in congregate settings, and other groups and other communities at higher risk of severe outcomes from COVID-19.”

Additionally, “The staff of manufacturing facilities identified as critical infrastructure or critical to national security is, by definition, essential to the economy and safety of the State as part of Phase 2.”

In total, the state’s vaccine distribution plan estimates there are approximately 425,000 health care workers who would be among the populations prioritized in the first two phases of vaccine distribution — along with about 31,000 first responders; more than a million adults older than 65; almost 1.3 million adults with high-risk underlying conditions; more than 16,000 child care workers; more than 250,000 teachers and school staff; 1,300 water and wastewater workers; more than 2,200 energy workers; 150,000 manufacturing employees; and 50,000 food and agriculture plant workers.

That would be about 3.3 million people in priority groups — more than half the population of Missouri — and 6.6 million doses of vaccine, if two doses are ultimately required.

During the second phase of distribution, the state would also prepare for vaccination of the general public, “depending on vaccine quantities,” and authorities would “continue providing a regional approach” to vaccinating the rest of Missouri’s population.

At phase three, the state would “focus on making sure every Missourian who qualifies and needs or wants a COVID-19 vaccine receives the requested vaccine at no cost,” according to the plan.

To assist in those efforts, the state would use a mobile medical unit, “as needed or requested,” staffed with a Department of Health and Senior Services team who would be dedicated to that mobile vaccination unit.

“Community partners will need to identify other resources for vaccinating hard-to-reach populations. This will also help local and state health authorities to provide vaccinations to outbreaks in these communities.”

Also during the third phase, the state “will work toward routine annual vaccination for the qualifying population.”

On encouraging the public’s trust of a vaccine, Williams said, “To even get to the FDA, it has to go through very reputable companies, whose scientists have spent their whole lives staking their reputations” on development of safe vaccines.

Once before the Food and Drug Administration, that agency involves outside stakeholders through national academies in its approval process, Williams said.

Once approved by the FDA, he said a vaccine faces scrutiny by a national advisory committee, and then the CDC — altogether, an “incredibly-layered approach” involving private and public entities.

Parson added he would not issue a mandate for people to be vaccinated.