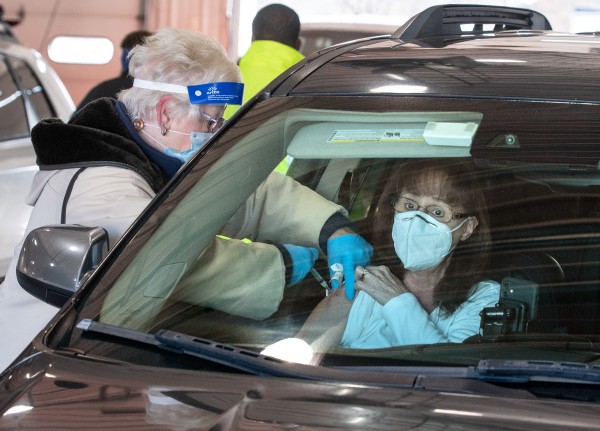 DOVER — The distribution of the COVID-19 vaccine has sputtered out of the gate but state officials expressed confidence it will pick up soon.

Delaware has administered 23,851 doses of the vaccine as of 11:59 p.m. Friday. Delaware Division of Public Health Director Dr. Karyl Rattay said the rollout has been hampered because of the holiday season and reporting delays.

“The holidays have made this a tough way to get started,” Dr. Rattay said. “Logistics are more complicated over the holidays. There’s some hesitancy among staff to take vaccine over the holidays. But our partners are very confident the acceleration of vaccination is going to increase significantly over the coming weeks.”

The state is still in Phase !A of its distribution plan and has said it hopes to move into Phase 1B in mid- or late January.
Phase 1A includes vaccinations for health care personnel with direct contact with ill patients or infectious material, emergency medical services agencies, long-term care staff and long-term care residents, according to the DPH’s plan.

The state has received 53,650 doses of the vaccine so far, with 28,300 of the Moderna vaccine and 25,350 of the Pfizer vaccine. The most recent shipment came on Tuesday when the state received 2,925. No shipments arrived on Wednesday, Thursday or Friday, according to the DPH.

According to the Centers for Disease Control, Delaware’s preliminary schedule is to receive 5,850 doses of each vaccine for a total of 11,700 every week. Those are preliminary estimates and the state finds out the exact total days before, which has also presented a challenge.

“We’ve seen less a few times, which does make it a little more complicated to plan,” Dr. Rattay said. “We have to be flexible in how we plan. We’re hoping at some point we start to actually receive more than what we have planned for. Also it would be nice if we had multiple weeks of projection of what we are going to receive, but we do our best with the information that we receive. We get it out to our partners and we know they are doing their best to expedite their role in administering it.”

Dr. Rattay said because the state is dealing with reporting delays, the number of administered doses is likely higher than 23,851.

At least 10,000 doses have also been set aside as the second dose for those who already received their first dose. Both the Pfizer and Moderna vaccines require two doses, with about three weeks in between the doses for the Pfizer vaccine and about four weeks for the Moderna vaccine.

The DPH also has about 10,000 doses in storage at its Kent County warehouse, which are in the process of being distributed to Emergency Medical Services. The remainder of those doses are allocated for newly enrolled distribution providers.

“There’s a plan for all these doses,” Dr. Rattay said.

State officials said they are working with all their distribution partners to resolve any bottlenecks.

“I think one of the challenges here at the beginning is just getting everybody in sync,” Gov. John Carney said. “We’re going to use the partner networks that have been established in the past, which include the hospitals. There are a lot of questions and it’s a little different than administering a flu vaccine. Timing-wise, data collection-wise, we want to make sure we collect all the appropriate data.

“We put our vaccine tracker out there just as it’s being developed, so there will be improvements to that as well. The focus from my desk will be doing that efficiently and quickly so we can move along and meet the needs of our population.”

Both vaccines have expiration dates — they can last up to six months frozen, according to the CDC.

The DPH received freezers in early December to store the vaccine, but Dr. Rattay said considering the speed at which the state wants to vaccinate, the expiration date won’t come into play.

Gov. Carney added the state has worked with its distribution partners to know what rate they can vaccinate at, which helps the state avoid waste and diversify its shipments to take advantage of all the vaccine it has.

“That way we can divert some so we are not leaving vaccine on the shelf,” Gov. Carney said. “We can get it in someone’s arm as soon as possible.”

The state has already had 12 clinics at long-term care centers complete their first round of doses.

“We’re really excited to get this program up and running to protect our most vulnerable,” Dr. Rattay said.

The state also completed a pilot of a vaccine distribution drive-through at the Dover Department of Motor Vehicles last week, which Dr. Rattay called a “great success.”

These drive-through “pods” are expected to be one of the main ways the state is looking to do large-scale vaccination events.

Those in between the ages of 18 and 34 have received 5,199 doses (22%) and those age 65 or older have been administered 3,277 doses of the vaccine for 14% of the total in Phase 1A so far. Twenty-eight doses are unknown which age group they were given to, due to reporting issues.

Gov. Carney reiterated the state is hopeful the rate of distribution will turn a corner in the next few weeks.

“I’d rather be in the position where we’re asking for more vaccines than we’re not getting out into arms the vaccine that we have,” Gov. Carney said. “I’m pretty confident based on what I hear that we’ll be able to catch up, if you will, just based on the start-up challenges that we’ve had, and we’ll be in that position sooner rather than later.”