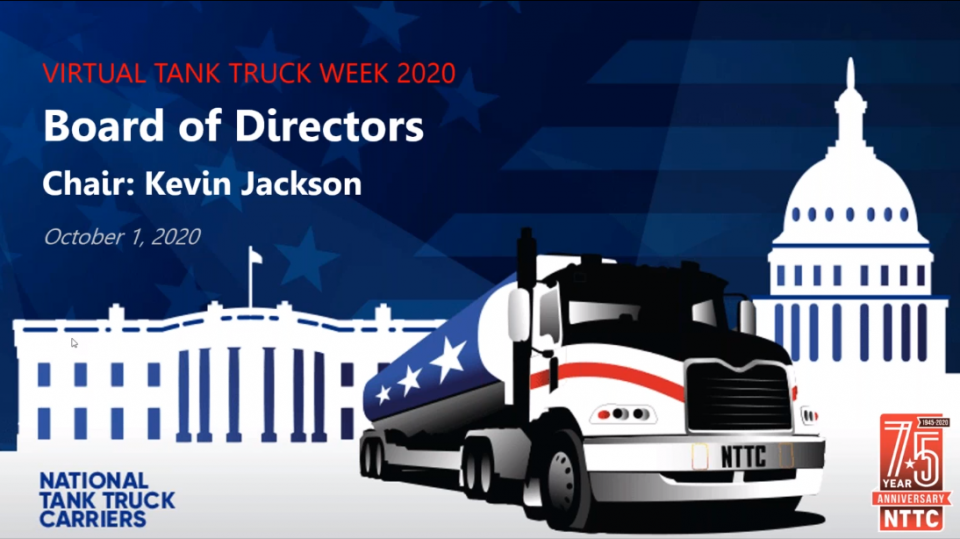 Intermodal operations are increasingly important as shippers and bulk carriers look for ways to save money and increase efficiency, especially during the ongoing COVID-19 pandemic that is wreaking havoc on supply chains and shifting demand.

American PetroLog’s here to help—and it has the capacity and industry prowess to move the most challenging projects into prosperity.

The highly diversified and innovative third-party logistics firm already was a fast-growing company before the coronavirus reached the United States in early 2020—as evidenced by its recent inclusion in Inc. 5000’s list of fastest-growing private companies—and it has continued to grow by finding new ways to solve emerging customer problems.

“To varying degrees, COVID has impacted all of our customers, especially in the form of projects or opening new distribution channels,” said Jeff Colonna, American PetroLog president and CEO. “We are proud of the fact that, despite the pandemic, American PetroLog has remained profitable and continued to grow year-over-year. This was achieved because we are continually adding new customers. We did not layoff or furlough a single employee.

One of the company’s most significant growth opportunities continues to be in transloading services, which American PetroLog provides at five sites across North America—including locations in Texas and New York the company brought online this year—with plans to continue expanding the business in 2021.

“American PetroLog has been able to maintain its existing customer base and established relationships with new customers during the pandemic,” Colonna said. “We’ve stayed safe by requiring all employees and partners to comply with the COVID-19 protocols established by American PetroLog and our customers.”

Colonna and Robert Kellner founded American PetroLog in 2015 with the goal of providing safe and reliable capacity to the petrochemical industry. Its initial commercial customers were producers of wastewater treatment chemicals and biofuels, which continue to be a growing commodity. “Due to the environmental benefit of biofuels, we are seeing North American product demand grow year-over-year,” Colonna said. “In 2020, we handled 80 million gallons of biofuel, and we project volume to exceed 100 million gallons in 2021.”

“Our company and personal roots go deep with the United States military, and we are proud that we are entrusted to handle the most sensitive fuels for critical missions around the world,” said Debbie Austerman, director of administration.

In 2019, American PetroLog was tasked with delivering 4 million gallons of aviation fuel for Mobility Guardian 2019, which was the Air Mobility Command’s largest full-spectrum readiness exercise to date, with 46 U.S. aircraft joining aircraft from 29 international partners and more than 4,000 U.S. and international Air Force, Army, Navy and Marine Corps aviators for 60 days of training in Spokane, Washington.

The company also now has long-term military contracts to provide domestic and international fuel delivery with its fleet of liquid bulk ISO tanks; and it assists the Federal Emergency Management Association when supply chains are interrupted by natural disasters, helping provide gasoline and diesel fuel, and even water that plant facilities need to get back up and running.

“We have built a reputation for safe operations that exceed all service expectations, which allows our business to grow organically,” Colonna said. “Our exceptional service and experience in aviation fuel also has allowed us to expand into hauling rocket propellant and missile fuel for NASA and SpaceX.”

The company’s primary sales and operations center is in Lafayette, Louisiana. It also has transloading operations in Brooklyn, New York; Odessa, Texas; and three other Texas sites near the Dallas-Fort Worth (DFW) Metroplex; and maintains a dedicated truck and ISO tank fleet that’s positioned throughout the United States.

American PetroLog recently landed on Inc. 5000’s list of the nation’s fastest-growing private companies, checking in at No. 544 among all companies and No. 24 in the transportation and logistics industry. Colonna said the company has enjoyed 849% growth since 2017 and currently has more than 100 customers, including many petrochemical manufacturers and distributors of all sizes, and the number is growing monthly.

“Not only are we growing our petrochemical customer base, we are adding new dry-bulk, NLG, industrial grease, food grade alcohol, and general commodity dry-van and flatbed freight,” he said.

American PetroLog is an asset-light third-party logistics firm that provides customized solutions through vetted venders held to its high safety and service standards, which Colonna insists exceed customer expectations. Vendors are managed by American PetroLog’s operations team and subject to compliance with its safety department.

Colonna said the company’s vendor relationships are critical to its success. American PetroLog’s approach goes beyond “find a load, find a truck,” to developing deeper-level connection with vendors, and awarding business based on its requirements and the vendor’s proven capabilities.

“When a customer brings an opportunity to us, we never say ‘no’ right off the bat, no matter what the opportunity is,” Colonna said. “We always respond with ‘tell me more.’”

American PetroLog currently has more than 435 carriers in its network. Some are used on dedicated contracts, others share volumes on larger contracts to bolster market capacity—and all are required to maintain a strong safety culture. All carrier partner and employee training is handled at the company’s Lafayette location.

Colonna estimated 90% of its carrier network consists of bulk haulers with up to 100 trucks. By managing these small- to medium-sized carriers, who don’t meet the size and safety requirements of larger shippers on their own, American PetroLog opens new capacity to big companies like ExxonMobil, which Colonna says is “very happy” with their business model. The approach allows smaller carriers to operate under its umbrella and gives them access to customers with whom they typically wouldn’t be able to work.

“It’s a win-win,” Colonna said. “Our customers benefit from gaining new capacity, across many carriers, that is compliant with their safety requirements, while only maintaining a singular relationship with American PetroLog.”

The company began developing its fleet of ISO tank containers in 2017. The fleet of 20-foot, 6,605-gallon tanks is used to move myriad liquid products domestically and internationally by train, ship and truck. A fleet of “several hundred” trucks and drop-deck chassis trailers are used for hauling ISO tanks over the road, and American PetroLog offers a B-train chassis service in Canada, allowing drivers to haul two tanks at once. This maximizes asset utilization, which is critical given the driver shortage that persists in North America.

American PetroLog’s newest ISO tanks feature telematics technology that enables customers to track shipments in transit, and monitor inventory levels on a near-real time basis when the tanks are used as on-site storage.

American PetroLog opened its first rail-to-truck transload and storage facility, featuring a 1,100-foot siding that can accommodate up to 18 rail cars, in May, 2017, on the BNSF Railway in Venus, Texas, in response to a customer’s need for a cost-effective solution for the distribution of chemicals in north Texas.

The company built out the DFW-area site with manifolded liquid product lines to accommodate the unloading of five railcars at a time, manifolded air lines to facilitate railcar sparging, liquid storage tanks with telemetry for inventory management, an in-ground certified truck scale, and dry bulk storage silos with an underground auger system and capacity for 10 million pounds of product, including grain, wheat, milo and corn.

American PetroLog moved into West Texas in mid-2019 but quickly learned its new site was too far west to work for Odessa and Midland customers due to the increased over-the-road mileage and costs associated with being served by a short-line railroad. So, in October, the company moved operations to Odessa, improving its market position and expanding service capabilities while improving cost-effectiveness for customers.

Colonna says the PSR strategy’s long-term success depends, at least in part, on third-party providers helping to bridge gaps that emerge between the model and the railroad’s customers. “This includes an ever more important role for transloaders like American PetroLog to improve access to rail service,” he said.

The need is especially urgent in large urban centers like New York City, Colonna argued, where trucks still are a major contributor to overwhelming traffic congestion that is worsening due to broader market changes, including the unassailable rise of e-commerce and last-mile deliveries only accelerated by the pandemic.

Freight arriving at Conrail’s Oak Island Yard in New Jersey is loaded onto a barge at NYNJR’s Greenville marine terminal and sent across the harbor to American PetroLog’s 65th Street Rail Yard in New York in one day, providing a more direct path than the circuitous rail routes over land that compete with passenger and municipal solid waste (MSW) traffic, or similarly circuitous truck routes involving multiple bridges and notorious bottlenecks.

Colonna said the combined capacity of 18 rails cars is equivalent to 72 trailer loads, and the railroad maintains two of the new, high-capacity car floats, which run multiple times per day Monday through Friday. American PetroLog’s transloading site in the heart of Brooklyn currently boasts 15 acres of outdoor storage space, with room for expansion, and 3,000 feet of track dedicated to transloading, with another 5,000 feet of storage track.

The site also provides 24-7 monitoring and security thanks to its location within the Brooklyn Army Terminal complex.

American PetroLog isn’t done expanding its transloading services. With five sites currently in operation, the business provides 25% of the company’s annual revenue, and Colonna said transloading expansion is a key factor in the company’s overall growth plans, though those plans were delayed by the ongoing health crisis.

“In 2020 there were several new rail-to-truck transload facilities that we were planning on developing for customers, but due to COVID, these start-ups have been pushed back to 2021,” said Robert Kellner, chief relationship officer. “These markets include southeast Texas, North Dakota, South Dakota, Alabama and Florida.”

Through existing relationships and networking, American PetroLog’s sales team identifies customer needs by constantly examining supply chains for inefficiencies, then designing solutions that best meet those needs. “Our Sales team is focused on identifying the true needs of our customers and providing them with a customized solution that allows them to be successful,” said Esau Washington, director of sales and marketing.

After the management team designs the solution, the company’s safety department establishes standard operating procedures for material handling, and vendor partners are pulled into the process.

“We design our transloading SOPs to be customer- and product-specific, with safety and efficiency as our primary goal,” said Harry Coyne, director of operations. “Our  transload operators are empowered to shut down the operation if they identify any safety issue. This approach creates buy-in from our entire team.”

And while the coronavirus has slowed progress in adding additional transload sites, it also has underscored their necessity. “In these times of uncertainty, shippers have a desire to streamline their supply chains and reduce the overall logistics spend,” Colonna said. “We have been able to fill both needs for many customers because of our material-handling expertise, safety protocols and willingness to develop new sites that serve their needs.”

Brexit: the end of public procurement rules or business as usual?