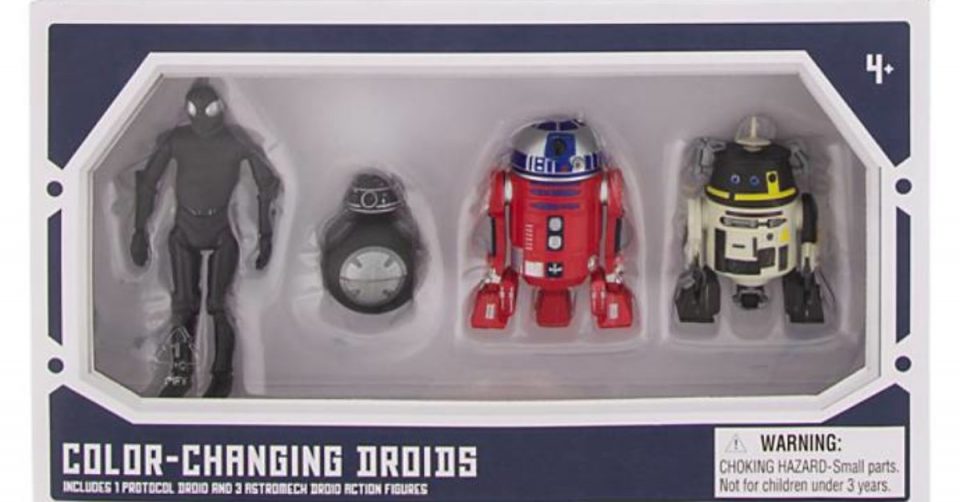 One the past year, we have seen a lot of Star Wars Galaxy’s Edge collectible get a home release. With the rise in the pandemic and new Disney Park safety precautions, a lot of great collectibles that was original Disney Park exclusives have received an online release. This time the Droid Factory Play Set and two color-changing droid sets have arrived online at shopDisney. The Star Wars Droid Factory Play Set is packed with functioning parts like a moveable conveyer belt, two dunk tanks, lights, and sound effects. This set will also include a special Gonk Droid, which is a beloved and iconic droid from the Star Wars universe. To make things better, two different color-changing droid set will also be released. Each set will include 4 different iconic styles of droids, as seen in many of the Star Wars films. Set 1 will include two Atsromech droids similar to Star Wars: Rebels Chopper and the iconic R2-D2. Collectors will also get an inventory droid like AP-5 and a BB Unit similar to BB-9E. Set 2 will include a 2 protocol droid like the CZ business and communications bot, which is similar to CZ-3 and C-3PO. Two Astromech will also include a BB-8 and a special R4 series bot. Each of these Star Wars droids will feature articulation and will chase color when placed in warm water.

The Droid Depot is a huge hit at Star Wars Galaxy’s Edge, and now fans can bring it home with this playset and color-changing droids. There are a lot of iconic robots in the Star Wars universe, and both of these sets really pick some of the coolest ones around. The Factory set will be fun to use, and with the moving parts, lights, and sounds, it will be a blast for any Star Wars collector. The Star Wars: Galaxy’s Edge Droid Factory Play Set is priced at $49.99 and can be found here. Both The Color-Changing Droid Action Figure Sets are priced at $39.99, and fans can find Set 1 here and Set 2 here.

“Color-changing droids will be lining up to take dips in the warm-water dunk tanks of your very own Droid Factory. This set, which comes with a Gronk Droid, also features lights and sound effects, plus a sliding crane. Created especially for Walt Disney World Resort and Disneyland Resort.

“All different types of droids populate the galaxy. These four have the special ability to change color. Dip the protocol droid and three astromech droids into warm or cold water to reveal their alternate hue. Includes four color-changing action figures: one protocol droid and three astromech droids (including one BB unit). Color-change droids reveal second color when placed in warm or cold water.”

He has been the Collectibles Editor since late 2019. Funko Funatic, Historian, Air Force Veteran, and dedicated collector of many things.

Scallog, the French logistics robotics specialist, sets sail to conquer the US in agreement with Bastian Solutions

Augury, the Israeli AI start-up that detects factory errors ahead of time

Natural catastrophes cause above-average $100 billion in insurance losses in 2020: Aon