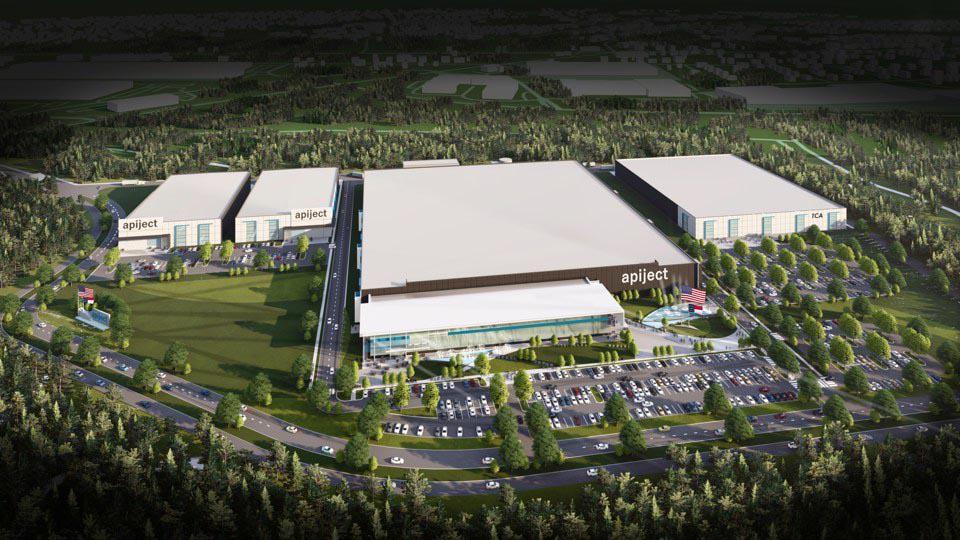 STAMFORD — ApiJect Systems Corp., a Stamford-based company developing disposable injection devices, announced this week it has secured a $590 million government loan to support the production of potentially billions of injectors for coronavirus vaccines and other medications.

The financing from the U.S. International Development Finance Corp. would support ApiJect’s plans to construct a 1 million-square-foot campus in North Carolina’s Research Triangle Park — what the company is billing as the world’s largest “pharmaceutical fill-finish facility” to package drugs into individual injectable doses.

When the “Gigafactory” in the Tar Heel State is up and running, the company said it will be able to produce as many as 3 billion single-dose injectors each year. Such an operation could be a boon to the federal government’s plans to deliver millions of doses of coronavirus vaccines, potentially starting early next year.

“This project will ensure America is never caught short in its ability to fill and finish vaccines and injectable medicines necessary to respond to population-wide health threats ranging from COVID-19 to any potential future bio-emergencies,” ApiJect CEO Franco Negron said in a statement.

A message left for ApiJect seeking comment for this article was not returned. To complete the campus, the IDFC loan requires the company to raise an additional $195 million in equity from non-U.S.-government sources.

At the North Carolina facility, ApiJect said it plans to employ a method known as blow-fill-seal packaging to create prefilled, disposable drugs injectors. The technology can fill and seal 12 to 25 drug containers per production line every three seconds, the company said.

Each manufacturing line will be isolated, allowing for up to 15 different drugs to be packaged simultaneously, the company said.

ApiJect’s announcement did not specify the timeline for building the factory. The company is still navigating the approval process. Its prefilled injector has not been cleared by the Food & Drug Administration for distribution in the U.S., according to its website.

Messages left Friday for the FDA inquiring about the status of its review of that product were not immediately returned.

The factory would be the second manufacturing plant developed by ApiJect using BFS technology.

The company repurposed a facility of Columbia, S.C.-based Ritedose Corp. that can produce up to 45 million doses of vaccines and other injectable medicines a month, representatives said. That undertaking is supported by a $138 million contract with the U.S. Defense and Health and Human Services departments.

“The teams from ApiJect and Ritedose did the near impossible by creating in just a few months the capacity to fill and finish up to 45 million prefilled syringes every month,” Ritedose CEO Jody Chastain said in a statement. “ApiJect’s new facility builds off that experience. It is the right step to address our nation’s glass vial supply chain vulnerabilities and expand domestic high-volume, fill-finish capacity for vaccines and other medicines.”

The urgency of building out supply chains has been underscored by the promising clinical results announced in the past two weeks by Pfizer and Moderna for their under-development coronavirus vaccines.

Pfizer, which has partly developed its vaccine in Connecticut, said Friday it was seeking approval of emergency use of that treatment, starting a process that could lead within weeks to distribution of shots.

Vaccines such as Pfizer’s will not only involve the production of billions of doses, but also need technology that can keep them at frigid temperatures. ApiJect said its North Carolina center will be able to support medicines requiring standard cold storage or ultra-cold storage as low as -70 degrees Celsius.

“I think anything that makes the supply chain more robust and more efficient is a good thing,” said Paul Pescatello, executive director and senior counsel for the Connecticut Business & Industry Association’s Connecticut Bioscience Growth Council. “ Having a robust supply chain to manufacture and distribute the vaccines is really important.”

A number of other medical-technology companies are also seeing burgeoning demand as a result of the pandemic. Among them, Franklin Lakes, N.J.-based BD announced in July it had received additional orders for 177 million injection devices for vaccine preparations in the U.S., and Canada.

“We’re in a very dense area of medical research,” Pescatello said. “Companies are able to pick up talent from centers of medical innovation and research hospitals in New York, Boston and Providence, R.I. It shows that Connecticut is a really good location.”