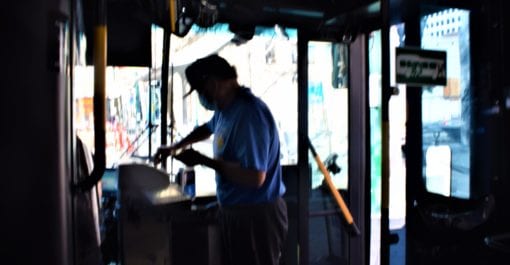 In the wake of a new federal mask-wearing requirement, the Santa Clara Valley Transportation Authority says it is going through hoops to ensure people cover up — but not to the satisfaction of drivers.

“We don’t feel they have our backs out there,” said John Courtney, a former VTA bus driver and president of the Amalgamated Transit Union Local 265. “It’s not our job to hand out masks… I’m driving a bus, I’m not a distributor of masks.”

Courtney said bus drivers won a small victory when VTA resumed rear-door boarding and re-suspended fare collection last week. ATU Local 265 had pushed for rear-door boarding amid a steep rise in COVID-19 cases among VTA workers. The agency also said it would begin using a third party to monitor contact tracing, which is now done internally through supervisors and managers.

However, Courtney said supervisors need to follow safety procedures and enforce mask-wearing on buses to reduce drivers’ exposure to COVID-19. At least 183 VTA workers have tested positive for COVID-19 as of Feb. 16, according to VTA spokesman Ken Blackstone, 101 of whom are bus drivers and light rail operators.

VTA’s average weekday bus ridership currently is about 27,610 trips a day, according to Blackstone.

The Centers for Disease Control and Prevention passed a federal order Jan. 29 requiring the use of masks while traveling on airplanes, trains, buses and taxis. VTA has required passengers and bus drivers to wear masks since March.

However, workers said enforcement usually relies on bus drivers stopping mid-route to wait for a supervisor or a sheriff to escort unlawful passengers off the bus.

A bus driver, who asked to remain anonymous for fear of retaliation, said drivers are required to pull over and call their supervisorial command center if a passenger removes or lowers a mask on the bus. The supervisor is supposed to come to the bus stop, or call a sheriff to escort a passenger off the bus.

Blackstone confirmed the protocol, but said the agency has been offering passengers free personal protective equipment (PPE) for some time via kiosks on the buses and trains and given drivers extensive PPE since the beginning of the pandemic.

“We have also been providing PPE and other protections to our operators since the onset of the pandemic with heroic procurement efforts by our staff in an extremely competitive environment with limited supply,” Blackstone said.

“We have also installed temporary plastic barriers for operators and are installing permanent, thick plastic barriers throughout our bus fleet,” Blackstone added. “Enforcement of passenger face coverings is handled by the Sheriff’s Department, who happen to have stretched-thin resources just like everyone else.”

The driver said many passengers comply with the letter of the law — wearing a mask — but still pose a health risk to drivers.

“In my personal experience, most of the time people have their masks on, but it’s not covering their face,” the driver said. “I just motion to them to put it up.”

The driver said VTA should place staff at bus stops to enforce mask-wearing. While he understands this is not feasible at every bus stop, it would show passengers and the public that the agency takes mask-wearing seriously. The driver said newer drivers in particular are afraid of being reprimanded if they enforce the rules too often.

“Give us some ability to not face reprimand if we don’t let people on the bus without a mask,” the driver said. “What do we have the rules for, if we’re not going to get any help from command central?”

As states prepare for disasters, they acknowledge things will get worse | Weather