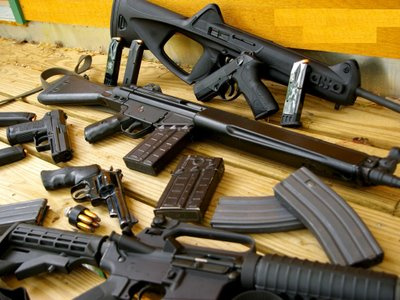 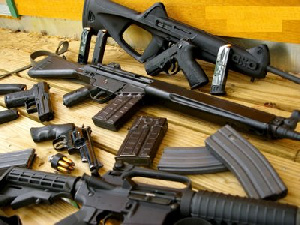 File photo: An investigative piece sanctioned by the Military High Command made the revelation

The Herald has intercepted an investigative piece sanctioned by the Military High Command, revealing how Ghanaian soldiers sent on peacekeeping mission ended up smuggling weapons into the country for various activities, including the sale of these deadly guns to civilians and hardened criminals, such as armed robbers.

Details of the document, done by the Special Investigation Branch of Ghana Military Police, by the Commanding Officer, Lt Col. F.K Bannerman (GH3004), revealed that on the blindside of the public, these contingents of Ghanaian army officers assigned to war-torn countries, end up smuggling weapons consisting of pistols, pump-action guns and others, under the cover of darkness into the country.

Two of the solders “WOII Dagadu and POII Kojovie, were escorted to Tema Community 1 cemetery, where two (2) pistols with one fake, was retrieved.

Aside the public cemetery, some of the rogue soldiers, had hidden theirs in a toilet facility at the military barracks.

The Military’s net as far back as 2017, caught the soldiers numbering five, with their identities, including names, pictures and stations revealed, but interestingly, they are yet to be taken through Military procedures called Court Marshal for flouting UNIFIL GHANBATT 83 “Command Policy Guidelines which prescribe that troops should refrain from the purchase of prohibited goods, including Explosives, Arms and Ammo.

They were part of officers sent to Lebanon for peacekeeping purposes by the United Nations (UN).

The illegal importation of these weapons by security officers who are supposed to know better is said to be one of the reasons why arms and ammunitions are springing up across the country with robbers taking advantage of the situation and acquiring these deadly weapons for their nefarious attacks on innocent Ghanaians.

The discovery of the document, comes on the back of the senseless killing of the Member of Parliament (MP) for Mfantseman Constituency, Ekow Quansah Hayford, a fortnight ago, by supposed armed robbers.

It also comes, as the Ghana Police Service, the Bureau of National Investigation (BNI) and several other state institutions investigating the circumstances surrounding the importation of some 436 illegal pistols and ammunition imported from Turkey into Ghana through the Tema Port, and had been impounded.

Additionally, it also comes at a time, the country is preparing for a very crucial elections in December with predictions of violence in the wake of the Ayawaso West Wuogon by-election gun violence by political party elements put in uniform in the name of National Security Secretariat.

But the failure of the Military to punish wrongdoing after conducting investigations into them is what appears to be encouraging the menace.

The investigative piece by the Military Police Special Investigation Branch commenced in September 2017 during which time many rounds of arrests and trips to the homes of these officers and even a cemetery where some of the weapons were hidden,was concluded in November 2017, but the final report was issued on February 9, 2018.

The document gives the officers names and numbers as; 188240 WO1Awaya Inusah stationed at MATS Headquarters, 189243 WOII Dagadu Patrick from Headquarters of the Southern Command, then 191168 PO1 Quainoo Paul Kumi Yaw, said to be stationed at WNC.

The document marked “confidential” and entitled “Alleged importation and unlawful possession of firearms”.

It narrated that activities of the officers came to light after the Commanding Officer;Lt Col. Bannerman got wind to the effect that the Warrant Officer who served with UNIFIL GH83, was in possession of weapons and had attempted to sell them.

Lt Col. Bannerman, thus task the Branch to conduct a search at the residence of WOI Awaya Insuah.

“A search was conducted in his residence at HG South Command and a total of five (5) pistols and a pump-action gun were found”.

The document continued that “in the course of the investigation, it came to light that the Warrant Officer while serving with the mentioned GHANBATT, made acquaintances with WOII Dagadu P, POII Quainoo P, SGT Adu-Ofori A, SGT Yentumi-Afful E and POII Kojovie Sena P, all soldiers who served with UNIFIL GH 83”.

It said “Through their acquaintances, WOI Awaya organized and assisted them to purchase weapons. Also, in their attempt to transport the weapons to Ghana, SGT Yentumi Afful, who had earlier bought an Audi engine to transport to Ghana, made a sea freight box with a compartment and they hid the weapons inside and transported it to Ghana without being detected.

A total of twelve (12) and one (1) fake pistol, seven (7) pump action guns and one (1) single barrel gun, were retrieved from the soldiers”.

While some of the officers were arrested and weapons retrieved from their residence at Ashaley Botwe in Accra, Burma Camp and other places, the likes of WO11 Dagadu and PO11 Kojovie, got theirs retrieved from the Tema Community 1 Public Cemetery, where the two pistols, one fake, were also buried in an effort to hide them.

During interrogation, WO1 Awaya admitted selling one of his pistols, but the buyer sent the pistol to the Criminal Investigations Department (CID) where it was detected as gas manufactured pistol and could not operate or fire live ammunition. The weapon was later confiscated since according to the CID, it was dangerous to the buyer.

The 29-points piece, a copy of which is in the possession of The Herald, recommended: “That the UNIFIL GHANBATT 83, Sea Freight Committee Chairman, Lt Col AA Baba (GH3118) be held blamable for not ensuring that the sea freight items were properly searched before transporting them to Ghana”.

It said, “That Commanding Officer for every GHANBATT Peace Support Operations be advised to support and encourage GHANBATT MPs to perform their duties well and effectively at operational areas”.

The recommendation which is yet to be implemented also asked that “The Warrant Officers and Senior Non Commissioned Officers should be sanctioned for contravening paragraphs f and c of pages 75 and 76 respectively of UNIFIL GHANBATT 83 Command Policy Guidelines, which prescribed that troops should refrain from the purchase of prohibited goods including explosives Arms and Ammo”.

On Sgt Yentumi-Afful, it was recommended that the officer be sanctioned under the Article One (1) of Section 179 B of the Criminal Offences Act of Ghana for unlawfully importing firearms into the country under the disguise of conveying his engine.

The recommendation went on to say that, the suspects should be sanctioned for breaching Section 48 of the Armed Forces Acts 1962 by conspiring to purchase and export firearms”.