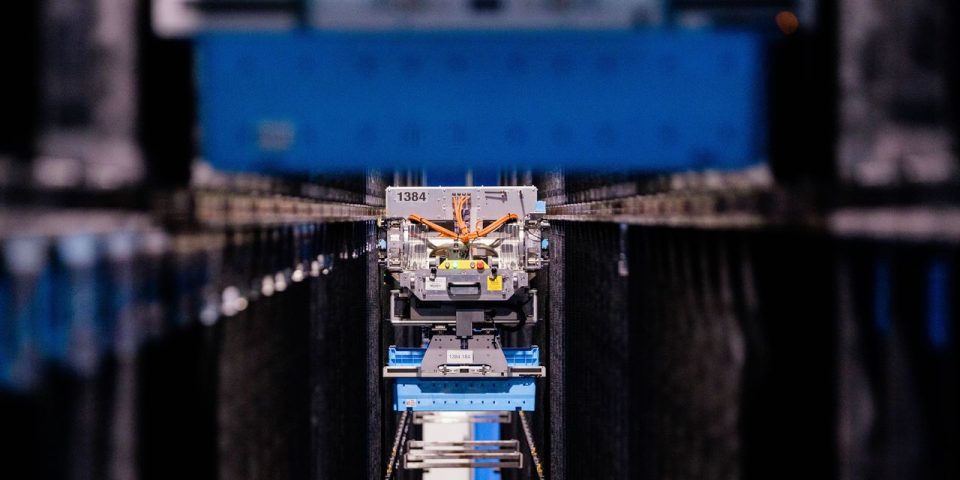 A robot army is doing training drills in a narrow warehouse by the Brooklyn-Queens Expressway.

Behind loading-dock doors covered in graffiti, the chunky metal machines navigate a 23-foot-tall structure stacked with blue plastic bins, sliding up, down and across metal racks as they select bins and move them to the warehouse floor. Down below, dozens of low-slung, mobile robots that resemble Roomba vacuums sweep along to move the bins to stations where human workers will finally get their hands on the goods.

The intricate dance, choreographed by software and executed with automation, powers a strategy known as microfulfillment. It is aimed at speeding up the delivery of goods to consumers in cities through operations that pack large numbers of products into tight, urban spaces.

How could the pandemic change the business of online shopping and logistics? Join the conversation below.

The sites are far smaller than the typical sprawling, labor-intensive distribution centers in remote industrial parks, and they are becoming a new focus for retailers adjusting to the dizzying changes in consumer markets. Some merchants had been testing compact fulfillment sites in recent years, but the rush to online shopping during the coronavirus pandemic is accelerating moves toward space-saving, automation-powered warehouses.

By squeezing those operations into urban warehouses and the backs of stores, businesses hope to pare delivery times so online orders reach their destinations in hours, not days.

The site in Brooklyn, a former depot for New York City street vendors, is dominated by the 7,500-square-foot automated storage and retrieval system from U.S.-Israeli robotics provider Fabric, which also will run the facility when it goes live next year.

Fabric co-founder and Chief Executive Elram Goren said companies storing goods at the site should be able to get orders picked and packed in five minutes or less with only a handful of workers.

“We’re looking at a very small number of people,” Mr. Goren said. A smaller system in Tel Aviv with four operators can process as many as 1,000 orders a day, he said.

Fabric plans to open another site in Long Island City in Queens next year, with the aim of adding another two in New York City to form an urban logistics network that could serve multiple brands or retailers.

Most microfulfillment operations are still being tested, but the strategy is gaining interest as grocery chains and other retailers scramble to meet rising e-commerce demand during the pandemic. The market for automated grocery microfulfillment centers is estimated to be worth $1.2 billion by 2024, according to market-research firm Interact Analysis.

The microfulfillment structures, from robotics company AutoStore, are essentially giant cubes packed with bins that sit on atop one another, with the most commonly selected items on top for faster access. Robots travel across the top of the cube, digging out bins and delivering them to stations where workers assemble the orders.

The key is storing the products in spaces only robots, not humans, can reach.

There is no vertical airspace between bins and only about 6 inches of space between stacks, said Mitch Hayes, vice president of e-commerce and retail for Swisslog Americas. Grocery installations typically include three different sections: one for room-temperature products, another for cooler items and a manual picking area for fast-moving goods.

Swisslog said it has installed more than 200 AutoStore systems globally, with a growing number in microfulfillment centers for third-party logistics providers, manufacturers and retailers.

are among the companies testing various automated systems from providers such as Takeoff Technologies Inc. Fabric is also building a 10,000-square-foot site for online grocer FreshDirect LLC and planning another facility in Dallas that would be about 40,000 square feet and fill both grocery and general merchandise orders.

Nongrocery retailers have been slower to embrace the concept, industry experts say.

“It allows us to get product to our customers faster,” Ngoc Phan, Nordstrom’s vice president of supply chain systems and engineering, said last year in an interview.

For grocers coping with surging online demand during the pandemic, the technology offers a faster return on investment than larger robotics-equipped warehouses while allowing retailers to fill orders more quickly than they can with human workers walking store aisles, said Tom Enright, a vice president analyst covering supply chain and retail fulfillment at research firm

“You’re able to do a lot more baskets and have a later cutoff,” Mr. Enright said. “You could get an order at 12 noon and get it on their doorstep by 3 or 4 p.m. or earlier.”

How to Choose Inventory Management Software