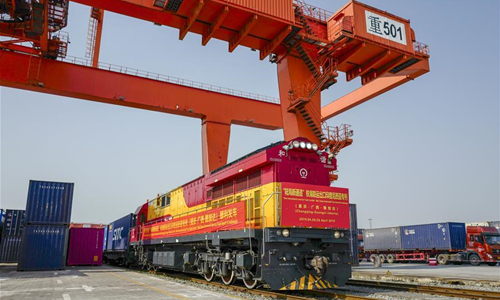 The interconnection between China and members of Association of Southeast Asian Nations (ASEAN) is expanding from an original focus on infrastructure and logistics flow to financial cooperation, marking a step further in strengthening connectively despite headwinds created by the pandemic.

During the just concluded China-Singapore (Chongqing) Connectivity Financial Summit on Wednesday, 10 Memorandum of Understandings (MoUs) between Singapore and Southwest China’s Chongqing Municipality companies and institutions relating to cross-border financial services cooperation, green finance and fintech were inked, according to the Monetary Authority of Singapore (MAS).

The authority said the China-Singapore (Chongqing) Demonstration Initiative on Strategic Connectivity (CCI) has helped to catalyze $3 billion in multi-currency financing deals from Chongqing this year, amounting to over $17 billion dollars in cross-border deals since the initiative’s inception in 2015.

The two-day summit is a signature event under the financial services pillar of the initiative. It focuses on opportunities to deepen financial collaboration between Singapore and Chongqing, and more broadly between ASEAN and western China.

For example, the CCI cross-border financial services is empowering the New International Land-Sea Trade Corridor. It is a financial service platform jointly built by China and Singapore for the corridor, providing convenient and low-cost financial services for logistics, trade and manufacturing enterprises along the route.

The New International Land-Sea Trade Corridor is a trade and logistics passage jointly built by Singapore and provincial-level regions of western China. Chongqing is the center of operation for the corridor. By means of railway, sea and road, goods from western China can travel southward and access the world market through coastal and border ports with shorter time compared with the traditional route from eastern China.

The trade corridor has so far expanded its reach to 311 ports in 106 countries and regions worldwide, the Xinhua News Agency reported.

In the first half of the year, land-sea freight trains departing from Chongqing recorded 952 trips, surging 147 percent on a yearly basis.