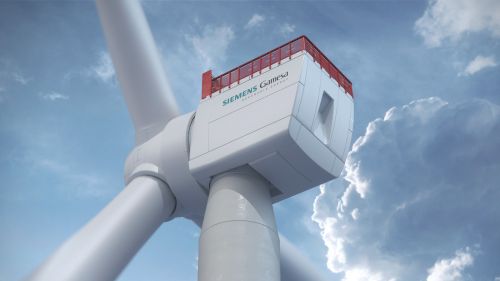 The world’s biggest wind turbine will be used at the largest U.S. offshore wind project, and the result may be the first American offshore turbine factory.

Siemens Gamesa said it’s considering establishing the first global factory for its new 14-megawatt offshore turbine somewhere in the U.S., after confirming on Monday that it will supply that model to Dominion Energy’s Coastal Virginia Offshore Wind project.

Dominion’s 2.6-gigawatt Coastal Virginia project is currently the largest planned in U.S. waters, with targeted installation over the course of three phases in 2024-26. The turbine order is conditional on Dominion getting all its permits for the project and making the final decision to proceed with the multi-billion-dollar investment.

Siemens Gamesa, the world’s leading offshore wind turbine supplier outside China, unveiled its new 14-megawatt model last week. The SG 14-222 is the largest wind turbine ever publicly announced, with 108-meter blades that stand 50 feet taller than the Statue of Liberty. The turbines will be ready for commercial installation sometime around 2024.

Shortly after winning the conditional order for Dominion’s project earlier this year, Siemens Gamesa confirmed it was thinking about building an offshore turbine factory somewhere on the Atlantic Coast.

In a statement on Monday, the company said it “continues to work with local stakeholders to investigate a potential blade manufacturing facility for these turbines on the East Coast, potentially the first facility custom-built to make components for SG 14-222.”

Virginia presses its case for an offshore wind factory

Virginia is competing hard with several other states — including New York —  for the first major U.S. offshore wind factory. Despite the proliferation of offshore wind projects and state targets along the Atlantic Coast, the U.S. lacks a local supply chain in an industry reliant on huge, expensive-to-transport components.

Dominion is currently building a 12-megawatt, two-turbine demonstration project 30 miles off Virginia Beach, which will be just the second U.S. offshore wind facility when it reaches completion later this year. The two 6-megawatt Siemens Gamesa turbines being used at Dominion’s pilot project were manufactured in Northern Europe and — because of the Jones Act — are being stationed in Halifax, Canada during offshore construction.

Virginia is relatively far from the densest cluster of U.S. offshore wind projects, centered around southern New England. But speaking recently to Greentech Media, Mark Mitchell, Dominion’s vice president of generation construction, said that Virginia holds a number of other advantages, including a large maritime workforce, lots of space for possible factories, and no overhead restrictions like bridges near its ports.

The availability of space will be critical for a facility capable of making blades for a model like the SG 14-222. The turbine’s 222-meter rotor diameter creates a “swept area” equivalent in size to seven NFL football fields, generating an estimated 25 percent more energy over the course of a year than the Siemens Gamesa’s previous 11-megawatt offshore model.

General Electric, the only major U.S.-based wind turbine maker on the global stage, has called it “inevitable” that the offshore wind supply chain will eventually localize, but the company has pointedly declined to speculate as to whether it may build additional U.S. manufacturing capacity for its 12-megawatt Haliade-X offshore turbine. GE’s offshore turbines are currently made in France.

Virginia’s case for offshore wind investment was strengthened by the state’s recently passed Clean Economy Act, which mandates 100 percent clean electricity by 2045. Dominion itself recently announced plans to build 24 gigawatts of renewables over the next 15 years, including 5 gigawatts of offshore wind.

Dominion is counting on a local supply chain to help bring costs down for its offshore wind projects, and recently confirmed it is an investor in what may be the first U.S.-flagged offshore wind installation vessel, expected to be ready for work sometime in 2023.

Separately, Siemens Gamesa on Monday announced that its SG 14-222 DD turbine was selected for use at the 300-megawatt Hai Long 2 offshore project in Taiwan, backed by developers Northland Power and Yushan Energy. That project is also set to begin construction around 2024.