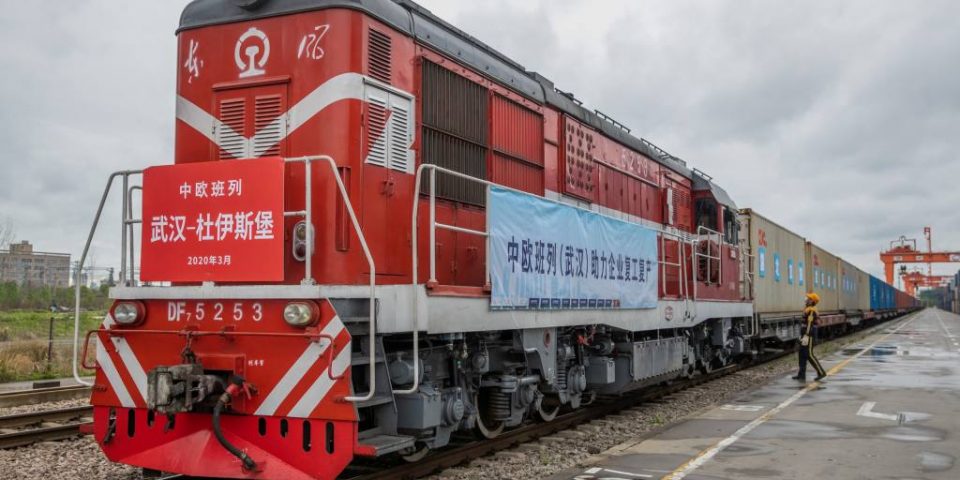 HAMBURG, Germany — With few international flights operating and many cargo ships knocked off course by the coronavirus pandemic, businesses sending goods between Asia and Europe have turned in desperation to trains linked to China’s Belt and Road project.

“These days, many European customers are exploring rail freight on the New Silk Road as an alternative and attractive transport mode,” Tim Scharwath, chief executive of global freight forwarding at German logistics operator DHL, told the Nikkei Asian Review. “We are seeing a strong increase in volumes in both directions.”

Until recently, trains that arrived in Europe with nearly every freight car in use might head back east with dozens empty. But the relative cheapness and dependability of train services are now too compelling to ignore.

Duisburg, a key German hub for services to and from China, saw a record 50 trains pass through during the first week of April, up from a pre-pandemic level of 35 to 40. Freight rates for the trains have held steady at around 24 cents per kilogram, according to supply chain consultancy Asia Pacific Connex in Perth, Australia.

By comparison, net prices to send cargo by plane from Frankfurt Airport to China, averaged 3 euros ($3.24) per kg in early March, though rates had slid back to 0.94 euro/kg by last week, according to Hong Kong air cargo data service TAC Index. 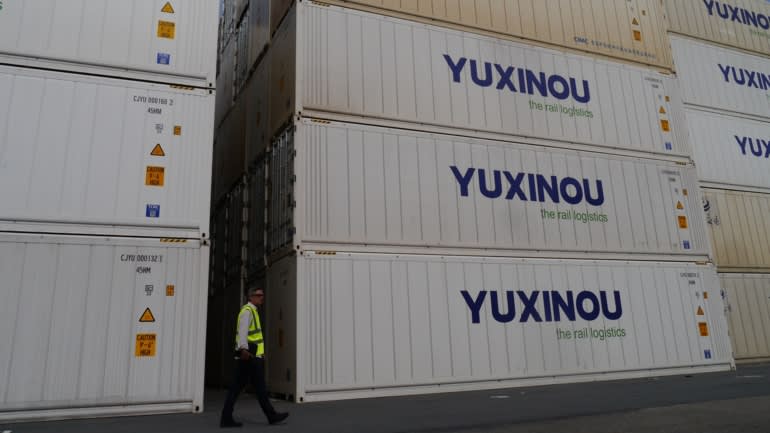 Europe-bound prices remain near peak levels, however, at 70.86 yuan ($10) per kg for loadings to Frankfurt from Shanghai Pudong International Airport last week, compared with 18.86 yuan/kg a year ago.

Sky-high prices reflect the scarcity value of jet space. Passenger flights, usually used to carry about half the freight shipped internationally by air, have been cut back by 95%, according to the International Air Transport Association, and remaining services are often operated haphazardly.

This has all been to the benefit of the train operators.

“The carried volumes, utilization, regularity and reliability on the China-Europe rail network have been positive in recent weeks,” said Akos Ersek, chief policy adviser to the International Union for Road-Rail Combined Transport, a Brussels-based industry group. “The price volatility caused by the pandemic makes transcontinental rail more attractive” than air cargo, he added.

Ocean shipping remains significantly cheaper than rail, but services and schedules there too have been disrupted by the plunge in demand due to national lockdowns and port controls to restrict the spread of COVID-19.

European shipping lines Maersk and MSC, for example, have suspended sailings on several of their busiest Asian routes, such as one that normally runs between Qingdao, China and the British port of Felixstowe. Overall global sea freight capacity is down almost 30%, according to estimates by investment bank Jefferies.

DHL, meanwhile, has doubled capacity on its transcontinental through trains, Scharwath told Nikkei, thanks to demand for shipment of chemicals, auto parts, consumer electronics and other goods.

Some train services were halted during the height of the COVID-19 outbreak but even links between Duisburg and Wuhan, the Chinese city where the pandemic started, had been restored by the end of March.

Until now, the growth of the transcontinental train network, reaching as far from China as the U.K. and Spain, had often been driven more by Beijing’s political agenda to advance its Belt and Road Initiative as by demand from shippers.

“Politically, China has used the announcement of new routes as evidence that the BRI is succeeding,” wrote researcher Jonathan Hillman in a report for the Center for Strategic and International Studies.

Andre Wheeler, chief executive of Asia Pacific Connex, estimated the real cost of carrying a standard 20-foot shipping container from Xi’an to the U.K. by rail at around $4,500 but said subsidies from local authorities had brought charges down as low as $3,000.

With that support being cut back and demand rising, rates have risen to $4,320. This compares to about $1,250 to send such a container by sea from China to the U.K.

The train service “was a niche market before COVID-19 and it will be one after COVID-19, but it has proven to be highly reliable,” he said.

Be On The Lookout For Bagworms