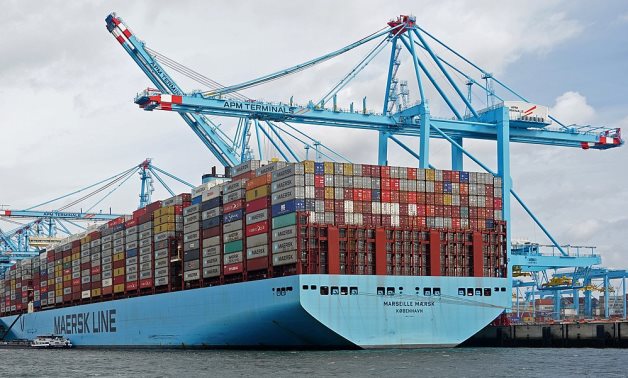 CAIRO – 22 November 2020: The COVID-19 outbreak has caused a slowdown in consumption, and subsequently, international trade disrupting maritime transportation. In addition, there has been more emphasis on online shopping than physical one, which requires adjustments in the logistics sector. The UNCTAD released in November an Overview of Maritime Transport report showcasing shifts, trends, and possible solutions.


The volume of maritime trade rose by 0.5 percent in 2019 recording 11.08 billion, and achieving a growth smaller than that of 2018 whereas the figure was 2.8 percent. Equally, global container port traffic grew by solely 2 percent in 2019 down from 5.1 percent in the previous year.


One of the reasons the growth of maritime trade fell in 2019 is trade war as “additional tariffs are estimated to cut maritime trade by 0.5 percent,” the report indicates.


In 2019, the global commercial shipping fleet grew by 4.1 percent. That is the highest since 2019 but still below the levels hit between 2004 and 2012. Early in 2020, the world had 98,140 operating commercial ships of more than 100 gross tons, and a total capacity of 2.06 billion deadweight tons (dwt). The highest share of growth went to gas carriers followed by oil tankers, bulk carriers, and container ships.


The trade war gave rise to “the search for alternative markets and suppliers” so that flows were redirected from China to other states in South-East Asia, the report points out. On the other hand, the United States succeeded in boosting exports to most of the world’s states overriding the impact of the decline of its exports to China.


In spite of economies of scale coming into force through the deployment of large vessels, it had been detrimental to “ports and inland transport service providers,” the report highlights. That is because the demand on trucks and yard space increases. Subsequently, the total transport costs across the logistics chain rise. Furthermore, large vessels require additional investments in dredging and bigger cranes.


Moreover, “the concentration of cargo in bigger ships and fewer ports implies business for a smaller number of companies. The cost savings made on the seaside are not always passed on to clients in the form of lower freight rates,” the report showcases. Island developing states, where only few service providers are available, are the most influenced by that trend.


Given the oil market was going through super contango, there was demand on storing oil. As a result, tanker rates surged in March and April because of a hike in demand on floating storage. As a consequence, the availability of vessels for transport dipped. Also, “freight rates declined sharply in May 2020, with about a third of total vessels locked in floating storage returning to active trade and inflating oil supply,” the report clarifies.


As a response to the COVID-19 outbreak, carriers began to significantly reduce capacity in the second quarter of 2020. The capacity management strategies are epitomized in suspending services, blanking scheduled sailings, and re-routing vessels. For shippers, that translates into space limitations and delays in delivery dates, which affects the supply chain.


“In the first half of 2020, freight rates were higher compared with 2019 for most routes, with reported profits for many carriers exceeding 2019 levels. While keeping freight rates at levels that ensure economic viability for the sector may have been justified as crisis-mitigation strategy, sustained cuts in ship supply capacity for longer periods and during the recovery phase will be problematic for maritime transport and trade, including shippers and ports,” the report underlines.


The report notes that dry bulk freight rates were subject to supply and demand imbalances increased by the “disruptions caused by the pandemic.” “As a result, rates have shown high volatility, especially among the larger vessel categories,” the report indicates.


Supply chains are being shortened because of the acceleration in trade regionalization. Such shortening is embodied in nearshoring and reshoring as well as redundancy) excess stocks and inventory.)


“Investing in warehousing and storage will become more important to ensure sufficient safety stocks and inventories. The established just-in-time supply chain model will be reassessed to include considerations such as resilience and robustness. Diversification in sourcing, routing and distribution channels will grow in importance. Moving away from single country-centric location sourcing to multiple location sourcing that is not only focused on cutting costs and delays but also on risk management and resilience will evolve further,” the report asserts.


The spike in online shopping requires more customized goods as well as changes in production and transport patterns. The report estimates that such trends “are likely to emphasize the last-mile transport leg and promote shorter supply chains through the use of three dimensional printing and robotics.”


“Technology, digitalization and innovation will further permeate supply chains and their distribution networks, including transport and logistics,” the report points out.


Driven by ship oversupply and the pandemic’s fallout, “some shipping lines and port operators have been taking greater interest in potential business opportunities that may exist in the supply chain through inland logistics. The aim is to be closer to shippers and emerge as reliable end-to-end logistics service providers,” the report highlights.


It also warns there are “concerns over market concentration and oligopolistic market structures (that) require close monitoring of trends that promote rationalization, consolidation and integration of services to ensure adequate competition levels.”

NFL Distribution Map: Will get to see the Steelers vs. Jaguars, Week 11

Carmel bakery fundraiser to support those affected by natural disasters