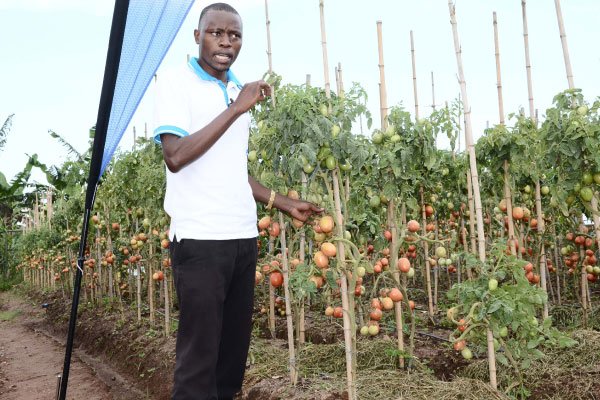 The hunger for agricultural knowledge was evident during the 20th edition of the Seeds of Gold Farm Clinic which was for the second time held virtually and live on all Nation Media Group social media handles including NTV last Saturday.

To offer the invaluable agricultural lessons were experts from the National Agricultural Research Laboratories (NaRL) in Kawanda and Korea Programme on International Agriculture (Kopia).
Lessons
For farmers who are keen on commercial banana production, the pressure of pests and diseases was high on their list of worries.

Yellow sigatoka, nematodes, panama wilt and fusarium wilt, among others, were all cited as threats to the future of banana production, especially in western Uganda, which produces up to 68 per cent of the country’s banana output.

The trainers noted that such challenges will be solved if farmers start using improved varieties while adhering to good agronomic practices.

Farmers that were following online due to Covid-19 restrictions on social distancing asked a variety of questions including how intercrops can be managed in bananas.

Ivan Arinaitwe, a banana breeder explained that farmers should be careful on inter cropping because it can deny farmers their optimum profit.

“One needs to choose carefully why they are growing bananas. If it is for commercial purposes, to avoid competition, vegetables can be planted separately,” Arinaitwe said.

Another follower on Twitter, Brenda Nalumansi, was concerned about the use of organic chemicals, to which Arinaitwe allayed any fears saying there is no evidence of these chemicals being dangerous.

Dr Okurut stressed the role of plantation management after farmers such as Steven Wamburu expressed concerns about how many banana suckers can be planted in an acre profitably.

“Planting three by three metres can result in 450 plants in an acre. If managed properly, it can take just 18 months to cover the initial costs,” Dr Okurut said.

NaroBan 5 is resistant to weevils, nematodes, and black Sigatoka. Additionally, its fruit is yellow, soft, and tasty, like that of most preferred cultivars, making it more acceptable to end-users.

“Earlier varieties NaroBan 1-4 have similar attributes and they could spur commercial production of bananas,” he said.

The new varieties are available at Naro centres and from private tissue culture laboratories which help with clean planting materials.
Dr Priver Namanya, the team leader for Naro’s Banana Research Programme, stressed that while banana research has addressed food security, there is much more from bananas.

She noted that there are more products that can be obtained from all parts of the banana plant including leaves, peels, fruit, and stems, creating opportunities to earn more income without compromising the aspect of food.

The incubation centre at Kawanda is exploring the contribution of banana products as raw material for beverage, textile, and energy, pharmaceutical and environmental conservation. She views value addition to bananas in terms of processing of fibre into textiles, carpets and paper, green banana resistant starch for management of non-communicable diseases (diabetes, heart disease and colon cancer) and ethanol for industrial use.

The current value of bananas consumed at home is at $1b (Shs3.69t).

Organic vegetable growing
Owing to the popularity of organic home-grown vegetables and fruits, Naro has partnered with Kopia to promote the practice.

Prof Wilberforce Tushemereirwe, the director of NaRL, said there is a great need to increase vegetable consumption.

Financial headache solved
Set up in 2009, the scheme is to facilitate the provision of medium and long-term financing for projects engaged in agriculture and agro processing. Stanbic Bank was recently recognised as the best performing commercial bank in disseminating the facility.

“We support individual and commercial farmers depending on their needs. The interest rate is between 12-15 per cent. With more than 64 branches and agents, we can reach every farmer across the country,” Byaruhanga noted.

Jane Kugonza, the senior outreach officer at Naro, hailed the partnership as a key strategy in availing research information to the farmers.

“We (Naro) innovate for agricultural transformation by generating technologies but if this information is not well disseminated the public cannot adopt them,” Kugonza said.

Through the Farm Clinic, Naro experts demonstrate new technologies and how they can be adopted for improved incomes and food security.

Sponsor’s message
Save for the future
The National Social Security Fund (NSSF), Voluntary Membership Plan is a new initiative which provides employers and workers that are not compelled by the mandatory provisions of the NSSF Act the opportunity to voluntarily save for their retirement.

Voluntary members can pay using mobile money via the NSSFGO code *254# accessible to the MTN and Airtel subscribers. The minimum amount of money a voluntary member can contribute is Shs5,000.

“NSSF realised the gap to help people who are excluded in mandatory savings where farmers belong. You will take pride and satisfaction in knowing that you have a secure retirement plan for yourself and your family,” Donald Asiimwe, Relations Manager Voluntary Benefits, said.
The voluntary benefit package is accessed via the website or at the various branches.

Why add a tax engine for procurement – European CEO