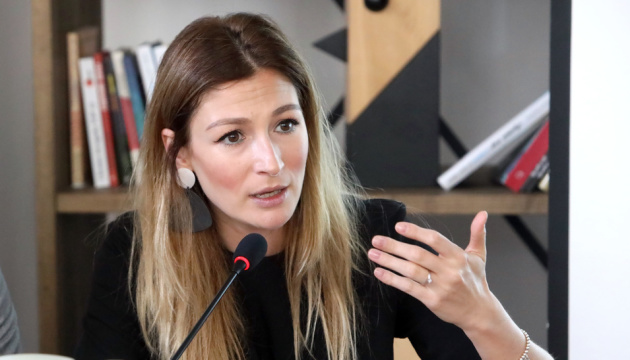 The launch of rail freight service on the so-called “Crimean Bridge” is illegal, and Ukraine will ask the ITLOS to consider the legality of the construction of this bridge.

First Deputy Minister for Foreign Affairs of Ukraine Emine Dzheppar said this to Ukrinform, commenting on the announcement of the launch of freight trains on the Crimean Bridge on June 30.

According to Dzheppar, the launch of rail freight service on the so-called “Crimean Bridge” by the Russian occupation administration is illegal, just as the bridge itself is an illegal structure. “It was built in violation of the 1982 UN Convention on the Law of the Sea. The consent of Ukraine as a coastal state for its construction was not obtained. There are no environmental assessments of its construction,” she stressed.

“The launch of railway link across the Crimean Bridge is another fact of Russia’s violation of international law and Ukrainian legislation. We will ask the ITLOS, which considers our large lawsuit against the Russian Federation over violation of the UN Convention on the Law of the Sea, to consider the legality of the construction and continuation of works on the operation of this bridge. In our opinion, these actions only exacerbate the dispute, and the tribunal will be informed of this,” the First Deputy Foreign Minister of Ukraine said.

Dzheppar stressed that the Ukrainian side gave a proper response at all stages of Russia’s illegal construction of the bridge. In particular, Ukraine sent the notes of protest to the Russian side and extended relevant sanctions to legal entities and individuals involved in the construction.

As reported, the construction of 19-kilometer “Crimean Bridge” from the Taman Peninsula (Russia’s Krasnodar Region) to Crimea, annexed by Russia, began in February 2016. At the same time, Moscow did not agree with Ukraine on restrictions for ships entering the waters of the Sea of ​​Azov in Ukrainian ports through the Kerch Strait.

In February 2018, Kyiv sent a memorandum to the Permanent Court of Arbitration over Russia’s violation of the UN Convention on the Law of the Sea, complaining, in particular, about the construction of the Crimean Bridge, restrictions on navigation in the Kerch Strait and the fact that the bridge actually blocked access of large vessels to the Sea of ​​Azov.

On December 23, 2019, the occupiers launched the first regular train from St. Petersburg to Sevastopol on the Crimean Bridge.

Covering curiosity, one metal fabricator at a time

CMA CGM to Launch Round The Africa Service ‘RTA’