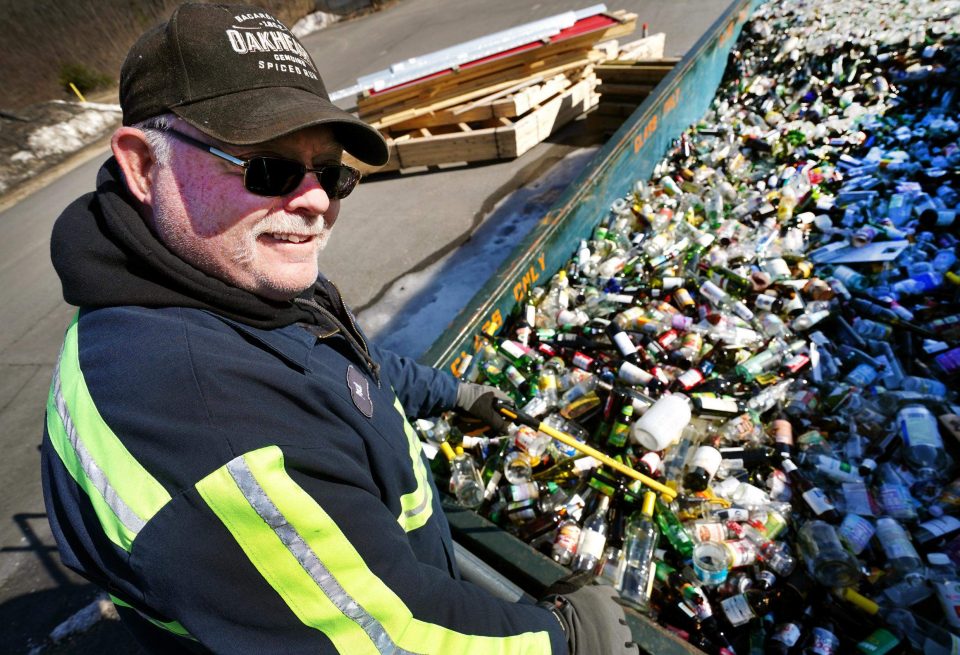 It may be a small community, but Rollinsford is making big strides to keep its recycling program viable amid a chaotic global market that’s left many communities across the country struggling with ballooning recycling costs.

Last year Rollinsford, population 2,500, asked residents to begin sorting their recycling after years of single-stream recycling. The town does not offer curbside recycling pickup and residents must drop off separated and non-contaminated recycling materials, such as plastic, aluminum, dry mixed paper and tin at the town’s recycling center at its transfer station.

The town purchased a $25,000 used hydraulic bailer for bundling plastic and aluminum and built separate bins for each type of recyclable. Currently, the town is able to sell tin and aluminum directly to Berwick Iron and Metal Recycling, according to transfer station manager Ed Walsh.

Walsh said working in partnership with the Northeast Resource Recovery Association (NRRA), the Epsom-based nonprofit helps connect Rollinsford with viable markets for recycling products, such as its partnership with a Canadian company to take crushed glass to make fiber glass.

To date, Walsh said Rollinsford’s recycling program has raised $4,000 and anticipates the program will earn enough revenue to cover the town’s capital investment within two years. Walsh said if the town was still relying on single-stream recycling, he would pay $9,000 in tipping fees for a contractor and another $11,000 in transportation costs for the contractor to haul it to its materials recovery center (MRF) in Massachusetts where it all gets sorted anyways.

Walsh said his initial concerns residents would recycle less because they were now taking the extra steps of rinsing and sorting their recycling were put to rest after the positive feedback from the community the town received.

“There was a two-week period when we were doing away with single-stream and getting ready for sorting and I got so many messages from upset residents who couldn’t recycle and they had to throw everything away,” Walsh said. “So, a big kudos needs to go to the community for embracing this and they’re doing their best to only bring us recyclable material.”

Many communities that rely on single-stream recycling and/or don’t have the open space to build a recycling center to accommodate a larger population’s volume of recycling, rely on a contractor like Waste Management (WM) or Casella that offer curbside pickup.

In Exeter, Public Works Director Jennifer Perry said it currently would be impractical for the community to pursue setting up a municipal recycling facility because residents have become accustomed to curbside pickup.

“In order to separate (your recycling), you need a place to keep all the material,” Perry said. “I don’t think Exeter residents would want to drive across town to drop off all their recycling and sort at the scene. Once you stop a recycling program, even if it’s temporary, it’s hard to get people to restart again.”

Perry said Exeter’s recycling program operates “at a loss” and the town’s five-year contract with WM, expiring in 2022, contains provisions for 3% annual increases. The town’s budget for solid waste and recycling disposal increased nearly 12% from $862,000 to $962,000 from 2018 to 2019. This on top of the town paying $122 per ton as a tipping fee at WM’s Turnkey Landfill in Rochester when the town is generating between 125 and 135 tons of recycling each month, according to Perry.

In Dover, Community Services Director John Storer said the city’s new contract increases the cost of curbside recycling from $429,000 – the price under the previous contractor, Pinnard, which didn’t charge tipping fees – now up to $618,000 with WM. He said WM charges Dover $100 per ton in tipping fees at Turnkey and an additional $45 to haul it to its MRF in Billerica, Massachusetts, then the town is credited any funds back from the sale of any of its recyclables.

“Waste Management’s MRF is fully automated but there are still about 65 people picking out trash and contaminated products,” Storer said about a visit he made to WM’s facility in Billerica. “It’s very expensive to have single-stream.”

Reagan Bissonnette, executive director of NRRA, said Rollinsford is a model community for the present recycling market. She said communities like Rollinsford have gained greater access to direct markets for high-quality recycling products by restarting their own dedicated sorting facility.

“Many communities are undoubtedly suffering from significant crunches in the recycling market” (due to China’s tighter restrictions on importing recycling products), Bissonnette said. “However, the reports of the death of recycling are greatly exaggerated.”

Bissonnette said there is no “one-size-fits-all” approach communities can take to ease their recycling woes. She said smaller communities are at more of an advantage to invest in storage, space and equipment required to operate a multi-stream recycling operation.

Communities looking for answers for their recycling dilemmas are positioned to recover. She said there is a combination of 22 new or existing paper mills across North America slated to begin accepting domestic mixed paper recycling products.

“China was buying almost half of the world’s mixed paper recycling,” Bissonnette said. “While China’s policy was disruptive, communities were left with this tremendous excess supply of paper that needed to be used up. This led to a tremendous investment in domestic paper mills.”

Storer said while he believes eventually switching to a sorted recycling stream in Dover has its advantages, doing so would require City Council approval. He said he used Derry as an example of a larger community that has developed its own 20,000-square-foot recycling facility and due to its volume and capacity is able to sit on quantities of various recycling products until it finds a lucrative market.

“I mentioned going to multi-stream in my recent presentation to the council, but the timing wasn’t right for us because it requires space, labor and equipment,” Storer said. “Rollinsford is on 2 acres, Derry is on 17 or 18. In my dream scenario, it’d be awesome to have a regional recycling facility that would create better commodities for communities.”

Until communities band together to develop a regional recycling facility, Walsh said a major advantage to running a sorted recycling stream is more direct control the town has over where the town sends some of the byproducts of its consumption.

“By sorting the recycling ourselves it gives us more control over where we’re sending it and what we can expect in return,” Walsh said. “Above all else recycling is just the right thing to do.”