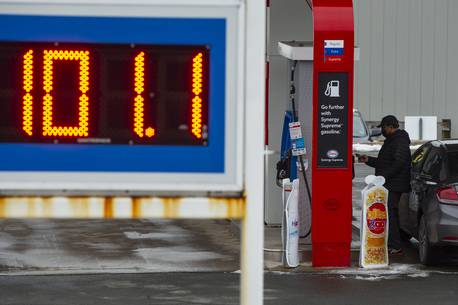 Some might want to call it the COVID-19 tax, but the Nova Scotia Utility and Review Board is about to give wholesalers of petroleum products a break by increasing the margin they can earn from the sale of a litre of fuel.

In a letter sent to the board on Dec. 22, Service Nova Scotia and Internal Services Minister Patricia Arab asked it to investigate, “on an expedited basis, about the sufficiency of the current wholesale margin and to consider making an interim order to increase wholesale margins.”

The change will be included Friday in the normal price setting for gasoline and diesel.

Wholesalers have been complaining that they are not making enough with the current margin due to reduced sales volumes brought about by the pandemic, so they’re not able to cover fixed costs like salaries, facilities and vehicles.

According to a news release from the board, under the province’s Petroleum Products Pricing Regulations it may make an order to temporarily prescribe “interim fixed wholesale prices in a situation that, in the board’s opinion, threatens the security of the petroleum supply, including where there may be a shortage of supply of a petroleum product to wholesalers and wholesaler-retailers.”

Refiners’ costs increased and that resulted in increased rack prices, which have been eating into the wholesaler margin. The rack price is the price of gasoline or diesel loaded onto a truck at the distribution terminal.

Chances are the review board may make more permanent changes to wholesale margins. It has started an investigation of the margins under current regulations.

The benchmark price of gasoline and diesel is based on an average of the daily market price on the New York Mercantile Exchange, converted into Canadian dollars.

The retail price paid at the pumps is the benchmark price with wholesale margin, retailer markup, transportation allowance, cost of carbon and taxes added.

Even before the interim order, the board had already set a hearing date on the wholesale margin issue for Jan. 21. Wholesalers requested an increase of 1.5 cents last year for things like general inflation.

One of the wholesalers, World Fuel Services Canada, which markets fuel in Canada under the XTR and Gulf brands and is selling to about 30 retail dealers in Nova Scotia, wrote a letter to the board outlining its problem with the current margin structure.

In the letter dated July 3, World Fuel Services Canada’s Michael Hill requested the board conduct a full review of the wholesale pricing methodology.

“Specifically, our concern is that since 2018 posted rack prices (the benchmark that drives our acquisition costs) have widened vs. New York Harbor (NYH) price benchmarks. Since the regulation sets maximum dealer prices on a fixed spread basis vs. NYH we have suffered a compression in our available wholesale margin when selling into the retail class of trade,” he wrote.

“We believe the wholesale margin under the regulation should be set using posted rack prices as they appropriately reference the supply pricing framework under which we buy our fuel. Other regulated jurisdictions such as P.E.I. establish maximum wholesale prices for dealers that reference both posted rack and NYH,” Hill stated.

There has not been any indication from the board whether it will hear the original request separately from the interim increase in margin.

Since there is a chance the interim order may be adjusted at some point when volumes return to near normal, the board may choose to keep the matters separate and hold two hearings.