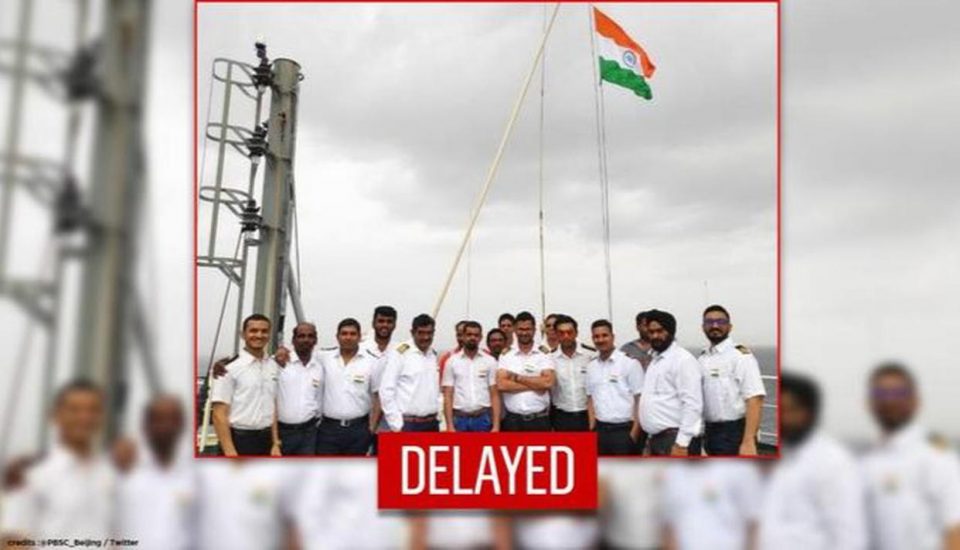 In the latest development, the return of 23 Indian sailors from China on the cargo ship MV Jag Anand has been delayed after the vessel’s arrival at Japan with the sailors has been deferred to 18 January. Union Minister of State for Ports, Shipping & Waterways Mansukh Mandaviya earlier announced the return of the 23 seafarers from China via Japan on January 14. However, with the arrival of MV Jag Anand at Japan delayed, the sailors along with the cargo ship are expected to reach Chiba on January 18.

The sailors were expected to reach Japan on January 14 following which they were due to be subjected to COVID-19 protocols before being flown back home. China, on December 25, had said that there is no ‘link’ between the stranded Indian ship crew on its Chinese ports and its strained relations with India and Australia. The statement had come a day after the External Affairs Ministry had said that two cargo vessels with a total of 39 Indians on board have been on anchorage in Chinese waters as they were not allowed to unload their cargo. China, last month, had blamed the freight forwarder of Jag Anand ship for the impasse, saying he is not letting the ship to leave.

On December 30, 2020, Union Minister Mansukh Manadviya had said that Indian sailors stuck in China will be brought back soon as diplomatic talks are on with the neighbouring country. Two cargo vessels with Indian sailors on board have been on anchorage in Chinese waters as they were not allowed to unload their cargo, though some other ships have managed to do so. Another vessel, MV Anastasia with 16 Indian nationals as its crew, is on anchorage near Caofeidian port in China since September 20, waiting for discharge of its cargo, he had said at a media briefing.

Our Seafarers stuck in China are coming back to India!

Ship M. V. Jag Anand, having 23 Indian crews, stuck in China, is set to sail toward Chiba,Japan to carry out crew change, will reach India on 14th January.

This could only happen due to strong leadership of @NarendraModi ji

I deeply appreciate the humanitarian approach of the Great Eastern Shipping Company towards the seafarers and standing by them in this crucial time!@GE_Shipping

The Seafarers will reach Chiba Port, Japan on 14th January and after following due procedure related to COVID protocols, they will fly back to India.

Can I get a coronavirus vaccine if someone doesn’t show up for theirs? Answers to COVID-19 vaccine questions

Is slowing down your speed to save money worth it?