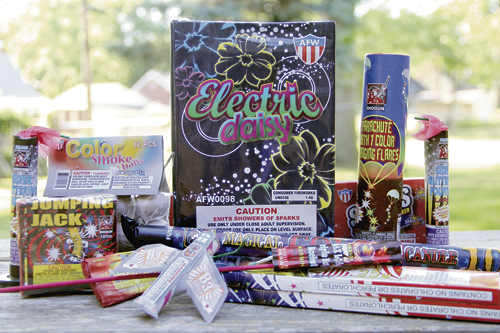 Staff photo / Allie Vugrincic
The retail fireworks business is booming during the COVID-19 pandemic, as cancellation of public fireworks displays has prompted people to buy more of their own.

YOUNGSTOWN — The retail fireworks business is booming during the COVID-19 pandemic, with Bruce Zoldan saying his Phantom Fireworks is doing twice the sales it did last year.

“Unexpectedly, the virus has been to fireworks what Purell, Clorox and toilet paper was to the beginning of the pandemic,” he said. “It’s an unbelievably high demand.”

Zoldan, president and CEO of Youngstown-based Phantom Fireworks, said his business has been one of the few to benefit from the virus.

“Most entertainment has been shut down; people have been in home isolation and not able to travel anywhere,” he said. “There’s been concern about going to restaurants. But people have been able to buy fireworks so they can have a barbecue and have their own backyard fireworks displays.”

The federal government paying an additional $600 in weekly unemployment through July 31 to some of those who lost their jobs because of the virus “has given people disposable dollars and they’re spending it on fireworks,” Zoldan said.

Fireworks are “one of the few items that has benefited” from the pandemic, he said.

Also, the cancellation of public fireworks displays has prompted people to buy more of their own, Zoldan said.

Phantom Fireworks, the country’s top consumer fireworks retailer, operates more than 80 stores and about 1,500 seasonal stands and tents in 15 states and sells to big-box stores, he said.

Phantom had to close its stores in the middle of March because of the COVID-19 pandemic and didn’t reopen them until late May and early June, Zoldan said.

With the fireworks made in China, Zoldan said the virus caused everything in that country to shut down in the middle of winter.

“Their virus ended because they followed their government’s guidelines or had no choice, and they came out of the virus and went into overtime,” he said. “They started providing fireworks in the middle of March. We got everything we ordered. We got a great inventory, but we weren’t sure we’d be able to sell them. We’ve had shortages in our stores.”

In Ohio, a person can purchase fireworks, but it’s illegal to use them in the state. The only permissible items are novelties that produce smoke, pop and / or sparkle. While it’s a first-degree misdemeanor to explode fireworks in the state, the law is rarely enforced.

While acknowledging that Ohioans use fireworks, Zoldan said, “But not to the extend if the law was clear. If that happened, the sales in Ohio would probably double.”

Zoldan supports a bill passed last week 77-17 by the Ohio House to legalize fireworks. Wholesalers would pay a 4 percent fee that would be used to fund a firefighter training program and a Fire Code Association would be created to oversee implementation of the law.

Zoldan said the Ohio Senate also backs the proposal, but he doesn’t expect it to be approved because Gov. Mike DeWine opposes it.

“Gov. DeWine is a friend of mine and has been for many, many years,” Zoldan said. “Right now, he’s dealing with the COVID crisis. I have to do a better job to convince him to support it because it would be safer with it being legal. Maybe in a quieter time, I’ll be able to convince him.”