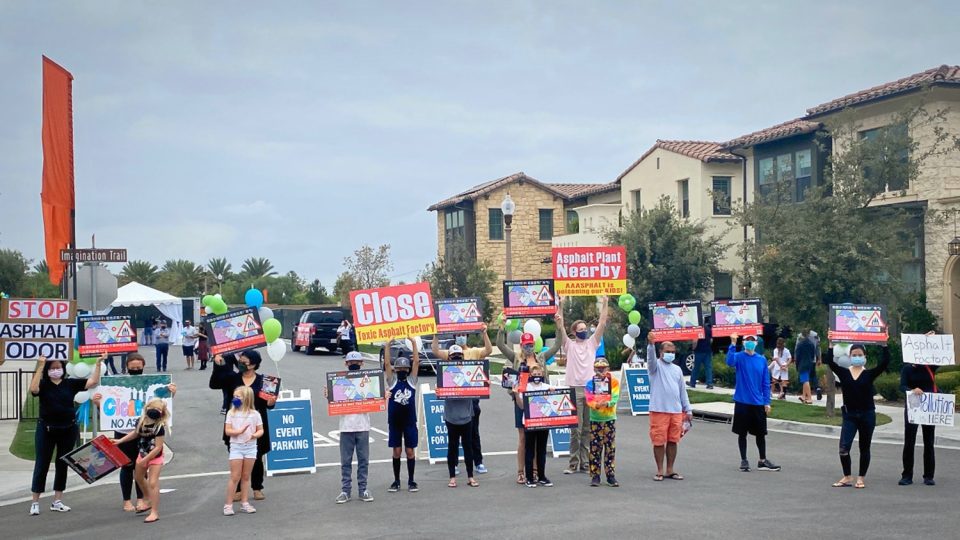 After years of working with the air quality district to address smells coming from an asphalt factory in their neighborhood, some Irvine residents have had enough, filing a lawsuit against the company and calling out public officials for their failure to address the problem.

A Voice of OC investigation earlier this year found residents living near the factory owned by All American Asphalt reported a stench forcing them to stay inside at all hours of the day, with measurements by homeowners showing higher levels of potentially dangerous chemicals in the air.

“Whenever we left the windows open…it smelled so bad, like something was burning. Sometimes it would be so bad we’d have to tape up under the vents to keep the smell out. I’d put towels under the doors, the garage in the morning would just completely smell like asphalt.”

While the factory and the South Coast Air Quality Management District, Orange County’s chief pollution regulator, have both maintained the fumes have had no impact on resident’s health, volunteer scientists from UC Irvine say that is still an open question without a better study.

At a forum in March, district staff and the UCI advisors agreed to work together, locating scanners that could measure 24-hour averages and minute-to-minute air quality.

While the district and UCI do have co-located scanners, the combined data has not been released on the district’s website, which has continued to publish only its data.

The air quality district is also conducting a review of the facility’s annual emissions reports after finding a “potential discrepancy” in the factory’s 2016 filings outlining the specific chemicals it releases. The factory has not been required to file a report of that detail since 2016.

Despite the new testing, Nontoxic Neighborhoods, an activism group organized by residents, says district staff have ignored their questions on the factory, largely cutting off contact and haven’t responded to questions asked the day after the forum.

In a statement to Voice of OC, the air quality district called their response “swift and robust,” saying it has responded to over 900 complaints near the factory since September 2019 and they are reviewing the factory’s emissions and permits to ensure its safety.

Frustrated by this slow movement, some residents have filed a class action lawsuit against the asphalt company.

The lawsuit was filed in March by Elmira Rad, a resident who lives near the factory, inviting anyone who has lived within two miles of the facility in the past three years to join. The lawsuit alleges the factory has failed to install adequate limits on the toxins it releases and demands monetary compensation for residents.

“The smell comes in the morning and lingers throughout my house for hours. I have to keep my windows closed to prevent this smell from coming in now…if I forget, it wakes me up.”

Tracy Walker-Gaspard, a member of the class

All American Asphalt did not respond to requests for comment on the lawsuit.

Residents are also running out of patience with the Irvine City Council, after repeated requests asking the city to pull the factory’s business license and host a public forum on the issue went unheeded.

The council majority has vehemently disagreed with the residents, pointing to the district’s forum in March as a sign of the action the council has taken and the city’s own lawsuit against the factory. The lawsuit alleged the factory created a public nuisance, and asked for an injunction against the facility.

“I know we’re in litigation and the litigation started before I was elected, but in terms of the quality of the air and whether there’s carcinogens or toxins that’s the AQMD, that’s not the city of Irvine,” Councilwoman Tammy Kim said in a phone call with Voice of OC. “At the end of the day, it’s AQMD that has to get this figured out.”

Councilman Mike Carroll had a similar response to Kim, sharing his exasperation with the district but saying the city can’t do more than it has.

“I think their response has been nothing short of terrible,” Carroll said in a phone call with Voice of OC on June 25. “I think it’s pathetic that the city of Irvine doesn’t get to control air quality in our own city.”

He then criticized efforts by Councilman Larry Agran to have the council discuss the issue, pointing out that Agran served on the council when the city annexed the land on which the factory sits. Agran says he was not aware of the factory’s existence at that time.

“It’s almost laughable that Carroll is trying to lay this problem at my feet. I don’t understand it other than his bizarre obsession with me,” Agran said. “All of us should be focused on how we provide meaningful relief for homeowners and others in that area.”

But Carroll has also been criticized alongside Councilman Anthony Kuo for their comments on residents’ efforts to study the plant themselves.

In emails released by the university in a public records request, Kuo and Carroll both reached out to the UCI administration following Voice of OC’s article, encouraging the university to publicly clarify the university’s role in the studies.

“This is a group of residents marketing your university. Again,” Carroll said in an email to Alberto Sandoval, the university’s community and government relations director. “There are very bright and capable individuals who are working on this, in their personal capacity…however, this is not an official UCI activity/advocacy.”

Kuo sent similar messages, quoting from the article and pointing out every time it referred to the researchers as UCI employees.

Sandoval agreed with Carroll’s characterization in his response, reiterating the university was not a sponsor of the study and all the experts were working on their own time.

“Carroll has never said anything to a single resident. He goes behind the public knowledge and writes letters to the UCI administration encouraging those administrators to censure the UCI advisors,” said Kevin Lien, one of Nontoxic Neighborhoods’ leaders. “Instead of trying to help residents, he’s trying to stop us.”

In the phone call on June 25, Carroll said he stood by his comments and wanted to be clear on the university’s involvement because the city was in the middle of a lawsuit with UCI at the time over a proposed new hospital on Jamboree Road. The suit has since been settled.

Noah Biesiada is a Voice of OC Reporting Fellow. Contact him at [email protected] or on Twitter @NBiesiada.

HFA to White House: ‘We need your help on supply chain’

His Small Factory Got Drafted Into Crafting A Key Component For Ventilators : NPR