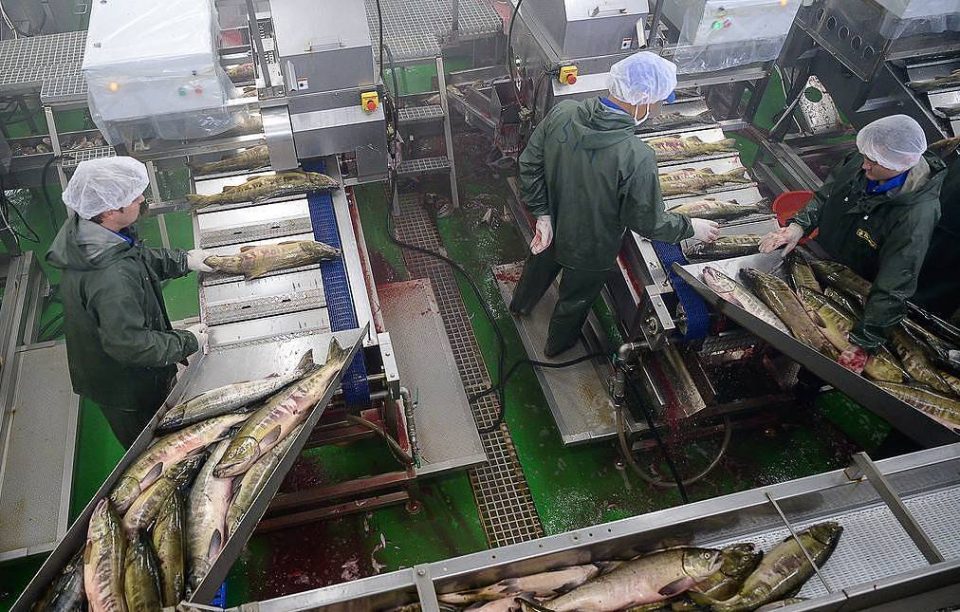 ST. PETERSBURG, May 28. /TASS/. Specialists say the best way in terms of quality and effectiveness to transport fish products from the Far East to Russia’s European part is by the Northern Sea Route.

Incentives for ice-breaking services, guaranteed freight on return voyages and consolidation of the cargo flow will result in regular fish supplies from the Far East to European Russia by the Northern Sea Route (NSR), the market players and the northern region’s officials told TASS.

Earlier, Russia’s President Vladimir Putin ordered the government to eye regular fish supplies from the Far East by the NSR.

“We have analyzed what hinders broader use of the NSR for fish transportation,” Kamchatka’s Fisheries Minister Andrei Zdetovetsky told TASS. “The freight flow should be consolidated, vessels should not remain idle on return voyages, the transportation costs should be less high, and the operational model should be improved. [These measures] will favor organization of backbone hub-ports in Petropavlovsk-Kamchatsky and in Russia’s other northern cities.”

Both the authorities and transport companies agree that using the NSR for fish deliveries is the best variant in terms of keeping the product quality and of having reasonable prices.

“When fish is transported to the central regions, at the Far East’s ports it undergoes handling at least two or three times — hence is the damage, risks of breaking the temperature regimes, while when using the NSR the companies would not face such problems,” Dobroflot’s Managing Director Alexander Yefremov told TASS. “Observing the ice-freezing regime throughout the transportation from the fishing site to the consumer means customers will get high-quality fish. When transported by the NSR, fish is taken to the western regions right from the sea.”

In 2015, the company resumed regular fish supplies from the Far East by the NSR, and since then has been bringing salmon to the central regions. In 2019, over the course of the summer-autumn navigation, the company’s vessels delivered 5,600 tonnes of fish via the Northern Sea Route.

Kamchatka’s minister also pointed to advantages of using the NSR. “It means cheaper deliveries, and in seasons, when salmon approaches the fishing areas, companies do not depend on fridge facilities at Vladivostok’s port. Besides the deliveries are quicker,” he said. “Another important aspect is fish is not reloaded from ships into carriages, thus, we believe, by using the Northern Sea Route we shall increase the handled freight.”

The problem of idle ships on return voyages

Presently, however, transporting fish products from the eastern producer is far from being attractive. In September 2019, the Sevmorput nuclear-powered icebreaking LASH carrier and container ship brought fish from Petropavlovsk-Kamchatsky to St. Petersburg. However, the practice did not develop into a regular route. According to the Kommersant daily, the second trip, due in early November 2019, was cancelled. The explained reason was that the transporter referred to lower export demand by East European ports and, consequently, freight charges from St. Petersburg to Asia dropped by 20%.

All regions, using the NSR, call load capacity a true problem for all “fish” vessels, as they return to the Far East. The Murmansk Region’s Deputy Governor Olga Kuznetsova stressed that return trips could be more effective only if ships carry freight. The region’s working group jointly with Atomflot (nuclear fleet authority) and potential freight senders has considered how to load container freight onto the vessels. Potential clients could be Nornickel, the Kandalaksha Aluminum Plant, etc.

The Arkhangelsk Region expects fish deliveries from the Far East in 2020.”We are ready and wait, the final [time and amount] will be specified in August,” the region’s Minister of Agriculture and Trade Irina Bazhanova told TASS. “This depends on how the fishing season goes in the Far East.” On return voyages, vessels could deliver products of the region’s wood processing industry.

Another possible measure to encourage fish transportation along the Northern Sea Route could be to subsidize Atomflot’s tariffs on icebreaking, Dobroflot’s representative said.

“I think this incentive could be applicable for Russian shipowners only,” he said. “Presently, icebreaking services take the third place in structure of our expenses to use the NSR.”

As for the port infrastructure — Russian regions are ready both to send and to receive fish carrying vessels. Kamchatka’s fisheries minister said the peninsula’s port facilities and berths are capable of serving regular fish deliveries by the NSR. However, he continued, the process would be most effective after 2021, when the Serograzka terminal is commissioned in Petropavlovsk-Kamchatsky. The terminal’s services would be: storage and warehousing of frozen or chilled cargoes and containers, as well as servicing fishing vessels, including pre-voyage services, supplies, bunkering, and ship repairing.