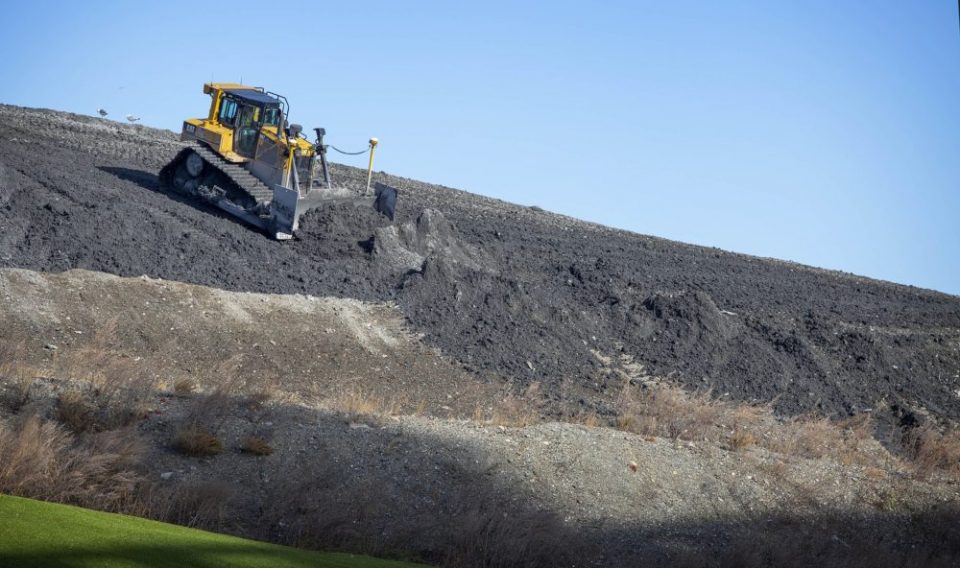 Editors note: this is the second in a two part series about trash incineration in Massachusetts. Part 1 looks at the perspectives of the communities housing incinerators.

The roads heading to the incinerator in Haverhill can at times look like a parade in honor of trash.

Dump trucks rumble in carrying garbage bags from 24 cities and towns, not including the hauls coming in from transfer stations. The trucks come all day long; as many as 250 come through to drop off trash on a given day, according to plant officials.

“Folks work here every day to process about 1,650 tons per day, and around 602,000 tons annually through the facility,” said Bill Zaneski, the facility manager.

The trash moving through Haverhill is a fraction of what’s produced in the state. According to the Massachusetts Department of Environmental Protection’s 2030 Solid Waste Master Plan, in 2019 residents and businesses threw out 5.5 million tons of garbage.

Most of that was burned at incinerators, like the one in Haverhill, because Massachusetts has barely any landfill space left. MassDEP oversees seven incinerators, nearly all of which produce electricity. According to a report from the Tishman Environment and Design Center at The New School, Massachusetts burns the most household trash per capita in the country.

Activists want the state to stop relying on incinerators to handle trash because of concerns about pollution. They also don’t want to see more landfill use; trash that isn’t burned in Massachusetts is largely sent to be buried out of state.

“We haven’t created programs to deal with our waste,” said Kirstie Pecci, an environmental attorney with the Conservation Law Foundation, “and people don’t really, can’t really imagine anything different than just burning it and burying it.”

But Pecci and other advocates do imagine something different: a policy framework of “zero waste.” It’s basically a system of policies that force companies to make less stuff, and force people to put less in the trash can, as a means of reducing our overall trash production.

“What we’re talking about is reducing waste first, then reusing and redesigning materials so they can be reused,” she said, “and then, only after we do that, do we look at actually recycling and composting.”

The Conservation Law Foundation is part of a coalition advocating for these policies statewide. There’s now a zero waste caucus in the state legislature, with 48 members as of September. These policies can include pay-as-you-throw programs that charge per trash can on the curb, increasing how much money people can get from bottle returns, or expanding recycling and composting to make sure those items stay out of the garbage in the first place.

Members of the coalition wants to pursue these policies immediately.

Massachusetts already bans many recyclable items from the trash, including metal, glass and cardboard; the state also recently added new bans on throwing out mattresses and textiles, and reduced how much food waste commercial-scale facilities can generate each week.

Yet one in every four loads of commercial trash that are inspected by the state fail that inspection because they’re full of material that isn’t supposed to be there, according to MassDEP.

The state is aiming for a 30% reduction in our overall trash production by 2030, and 90% reduction by 2050.The strategies to meet those goals is laid out in the solid waste master plan, which the state considers to be its own approach to zero waste.

“We set goals that we felt were achievable and were aggressive, but achievable on a statewide basis,” said Fisher, who acknowledged that this is not fast enough to satisfy activists. However, he noted that the state has still not met a reduction goal it set 10 years ago.

The master plan also calls for continued use of trash incinerators, with benchmarks to review possible reductions in permitted burn capacity. It additionally allows for increased capacity for facilities that use newer technologies, including gasification and pyrolysis, to burn the trash, but none of the incinerators in the state use those systems (the state has a moratorium on new construction for facilities using the technology already in place in the existing incinerators).

According to MassDEP, even if the state reaches its new trash reduction goals in time, there would still be a 700,000 ton gap between how much we throw out and how much we can dispose of in-state; the available landfill space is expected to shrink to nearly zero by the end of the decade. Incinerators allow for more capacity because when the trash become ash, its volume shrinks.

In large part because of the critical capacity, people running incinerators see themselves as part of the solution to future waste management, especially at facilities like most of those in Massachusetts, where the incineration process is used to produce electricity; Massachusetts categorizes these facilities as renewable energy sources.

“[It’s] a piece of the puzzle,” Zaneski said, “It’s a solution to the problem. It’s not the best in terms of, recycling would be better … [but] we are adding value to the community, we are part of the solution.”

Well-run incinerators are also considered by many to the better option over landfills, because, while incinerators emit carbon dioxide, landfills produce methane.

“When we look at what the impact of those two gasses just happens to be with respect to, say, climate change and greenhouse gasses, clearly the methane gas is significantly more detrimental to our environment than the [carbon dioxide],” said Frank Roethel, research professor and director of the Waste Reduction and Environmental Management Institute at Stony Brook University.

According to a recent United Nations report, waste is one of the three leading sources of methane worldwide. The U.S. Environmental Protection Agency identifies municipal solid waste landfills as the source of 15% of methane emissions in the country, which they find is the equivalent of more than 21 million cars driving for a year.

Incinerator companies should invest to make sure the technology they use to reduce emissions and toxins is state of the art, said Roethel, and should explore more ways to treat and dispose of the ash besides burying it.

“Now if we could find a strategy for managing our solid waste where there would be no methane produced, no [carbon dioxide] produced, that would be a game changer,” he said.

Members of the zero waste coalition argue there are better strategies, but they require completely reframing the problem.

According to Domenitz and the rest of the coalition, there’s more of an appetite for fast change than the state thinks. Several municipalities, including Boston, Cambridge and Nantucket, have adopted their own zero waste plans, and 147 cities and towns have passed local bans on single use plastic bags.

The coalition also sees hope in a state bill that would require companies that produce packaging to pay for the costs of recycling their products.

Some incinerator companies are also looking towards extended producer responsibility, particularly Covanta, the company that owns the Haverhill site. Company officials said getting rid of material they aren’t supposed to burn helps them operate more cleanly and efficiently, because they don’t have to spend time and money trying to neutralize toxins or emissions.

They’re more skeptical, however, of how much Massachusetts will be able to cut down on its trash; a 2019 analysis Covanta filed with the state found 63% of the material burned at the Haverhill facility was organic, paper or plastic.

“Some of that onus is on both the manufacturer, and then us as a people,” Zaneski said. “I think back to the days when I lived in Japan and I had to put my trash out in a clear plastic bag, and if there were recyclables in there, they didn’t pick [it] up. And I think that we’ve got to move in that direction as a country if we want to eliminate these plastics and recyclables from showing up every day in the trash.”

Zaneski and others have fair reason to be skeptical; similar bills for extended producer responsibility have failed in the past.

But this time there’s momentum. This time there’s also precedent. Last year, Maine became the first state in the country to require companies to cover the cost of recycling the packaging material they produce.