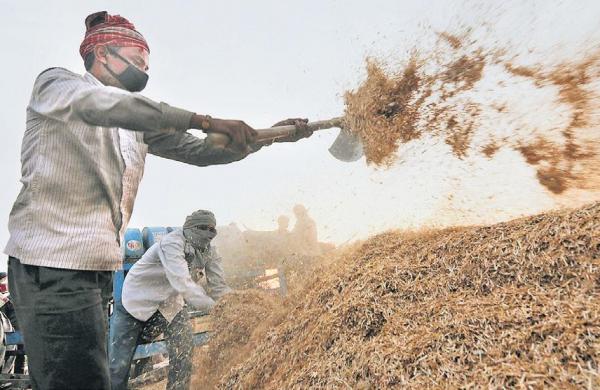 BHOPAL: Madhya Pradesh has so far reported record procurement of wheat in the current Rabi season by procuring over 87.43 lakh metric tonnes of wheat from more than 12.61 lakh farmers.

With this the central Indian state has reached the second position in the country in the area of procurement of wheat at the support price.

Prior to this, in 2012, the maximum of over 84.89 lakh metric tonnes of wheat was procured in Madhya Pradesh from more than 10.26 lakh farmers.

During this season, over 4.98 lakh metric tonnes wheat was purchased from 64,244 farmers in one day in the state, a quantity that has never been purchased in a single day.

The state’s Chief Secretary Iqbal Singh Bains and other concerned officials were also present in the meeting.

The CM said that in the time of the coronavirus crisis, the prompt procurement of wheat from the farmers and funds being deposited in their accounts speedily is a big relief for the farmers.

He further said that apart from wheat procurement, its speedy transportation and storage is also commendable. Out of the procured wheat, 72.80 lakh metric tonne wheat has been transported and stored.

Payment of around Rs 10,000 has been paid to 10 lakh farmers under procurement.

It may be noted that in these years the procurement work was done in the entire procurement period in about 50 days, whereas this year more wheat has been procured within a month of the commencement of procurement.

COVID-19 and the Global Supply Chain

How Can You Use E-Sourcing to Improve Your Company’s Procurement Strategy?