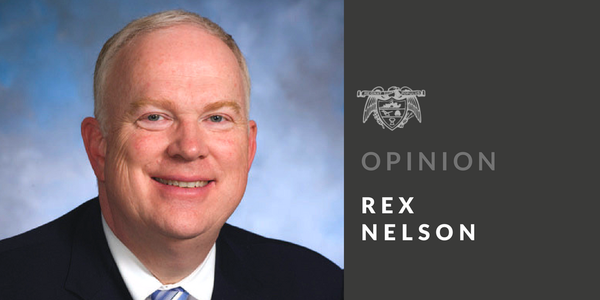 From the 1880s through the 1920s, there was a period of Arkansas history known as the Big Cut. Northern lumber companies came into the state, cut out the virgin timber and then moved on. Rather than remaining a vast bottomland hardwood forest, the Arkansas Delta was transformed into an area of row-crop agriculture. Large parts of south and west Arkansas were tangled cutovers prone to erosion.

“Over time, additional power equipment–such as tree cutters, road building machinery, haulers and material management tools–supported larger operations. The relationship between railroads and the timber industry was mutually beneficial. The railroads needed crossties and products to carry to market. The timber industry needed transportation and the mechanical skills supplied by railroad men. As the timber industry mechanized, men with metal-working skills in the railroad repair shops in Pine Bluff and Camden found jobs in the timber mills.”

Before the timber industry adopted the concept of sustainable forestry, it often fell to the federal government to protect Arkansas timberlands. An executive order issued by President Theodore Roosevelt created the Arkansas National Forest in December 1907. The head of the U.S. Forest Service, Gifford Pinchot, noted that it was the only major shortleaf pine forest under the federal government’s protection.

The 1911 Weeks Law, which authorized the federal purchase of large forest tracts, was used to add thousands of acres of cutover land. The biggest increases in the size of the forest occurred during the Great Depression.

In April 1926, President Calvin Coolidge changed the name of the Arkansas National Forest to the Ouachita National Forest. In December 1930, President Herbert Hoover extended that forest into eastern Oklahoma. The forest now consists of almost 1.8 million acres in 12 Arkansas and two Oklahoma counties. It’s the oldest national forest in the South.

President Dwight Eisenhower’s signature completed creation of the 23,600-acre St. Francis National Forest along Crowley’s Ridge in east Arkansas in November 1960. The land in Lee and Phillips counties had been known as the Marianna-Helena Project and was managed by the federal Soil Conservation Service.

While forestland in the Ouachita Mountains, Ozark Mountains and Crowley’s Ridge was protected by national forests, it fell to national wildlife refuges to protect Delta bottomlands. The state’s three national forests and its 10 national wildlife refuges now stand to benefit from congressional passage earlier this year of the Great American Outdoors Act. The act provides a massive infusion of funds during the next five years to clear a backlog of maintenance projects on federal lands.

The White River National Wildlife Refuge was created in 1935 during the FDR administration to protect the bottomlands and the migratory birds that use them. It’s considered one of the most important areas for wintering waterfowl in North America and is home to the only descendants of the native black bears that gave Arkansas the nickname Bear State (bears elsewhere in Arkansas are descendants of those brought from other states). The refuge is in the floodplain of the White River, near where it empties into the Mississippi River. It covers 160,756 acres.

The Cache River National Wildlife Refuge covers about 73,000 acres and is also an important wintering area for waterfowl. It runs along the floodplain of the Cache River and Bayou DeView for 70 miles and was established in 1986. There are non-contiguous tracts in Jackson, Woodruff, Monroe and Prairie counties.

The Bald Knob National Wildlife Refuge covers just more than 15,000 acres in White County. It was established in 1993 when the government purchased a rice farm from the John Hancock Insurance Co. Thousands of acres of former rice fields were reforested. The refuge is bordered on the south by the Little Red River.

Near the Mississippi River in Crittenden County, the 5,484-acre Wapanocca National Wildlife Refuge was established in 1961 after land was acquired from the Wapanocca Outing Club. The club had been established by wealthy Memphis residents in 1886 near Turrell.

Building back better through procurement