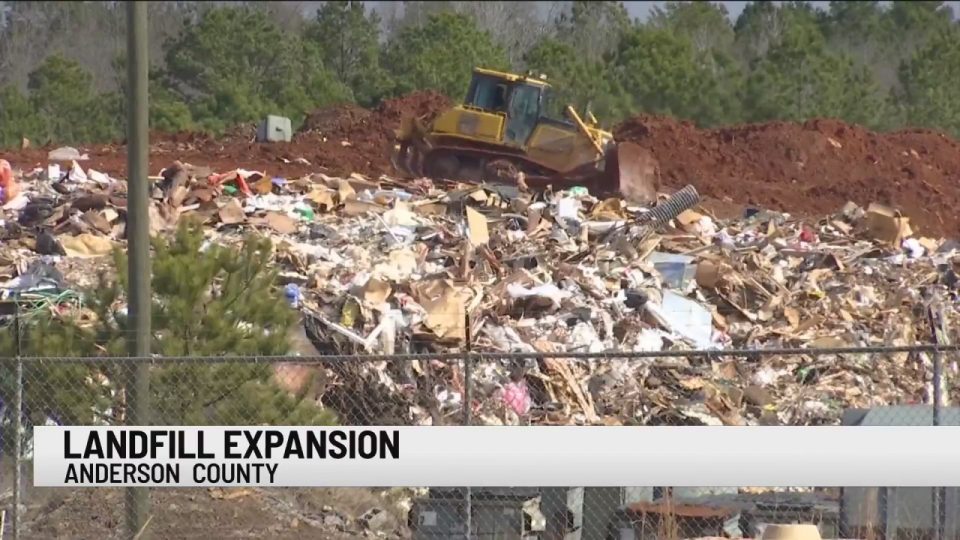 ANDERSON COUNTY, SC (WSPA) – A proposed landfill expansion has caused some concerns for some living in northern Anderson County. Many residents are saying, “not in my backyard”.

Wasteco. Inc. has asked the South Carolina Department of Health and Environmental Control (DHEC), for a permit to expand the Greenpointe Class 2 Landfill. Some residents in the area said they didn’t know this was on the table. However, company representatives said they provided a public notice in a newspaper on December 4th, 2019. They also said DHEC gave their public notice on October 21st, 2020.

“I have not received any communication or any written work, or any paper work or anything saying this is going to happen,” said Peggy Anderson, a nearby resident.

You can hear trucks roaring by Anderson’s home on Hamlin Road all day.

“I would say no, due to the fact that if it gets bigger, then there will be more trucks running up and down the road. The road that is not actually made to accept their weight, and the issues with them not covering their loads properly and things flying off, and their speed,” Anderson said.

“Just the smell sometimes at night, that’s about it,” said Robert Estes, a resident.

The Greenpointe Class Two Landfill has been there for years, but some aren’t too happy about the possibility of an expansion.

“I don’t want it in my backyard. Of course it’s not in my backyard, but I still feel the effect of it by my property taxes. My property value has gone down when that started out here,” Anderson said.

“I do have a concern with that because there is a smell. I don’t know what’s causing the smell,” Anderson said.

Wasteco Inc. released this statement to use about the proposal:

“This planned development will allow full use of the existing facility. By way of background, our facility does not receive or manage municipal or hazardous wastes.  We only take construction, demolition, and land clearing debris, we do not accept any liquids or toxic materials. This site a local family-owned company operating in the community since 2008.  We obtained permits and constructed this facility from the beginning in strict compliance with DHEC rules and regulations and with oversight of neighbors and County officials.  This project is designed to allow us to use other parts of the property to support our clients and the county’s growth.

“The project will not increase traffic outside the landfill or increase the amount of yearly debris sent to the facility.  The permit amendment simply allows previously planned landfill cells to be opened once others are closed out.  Because the permit changes will result in a zero sum gain at the facility, the number and frequency of trucks entering or exiting the plant will not change.  The permit modification will not be evident to those on surrounding roads.

“Since the facility was constructed, we have implemented a comprehensive environmental management plan and that will continue.  We have no releases to groundwater or surface water, which has been monitored biannually since we began taking debris in 2008.  Odors are controlled by an onsite Odor Management Plan, which is enforced by our staff and monitored by DHEC.  In fact, we have never received an NOV for odor emission violations.  We have had the odor emissions tested by a 3rd party with DHEC oversight and the no odor gases could be detected at the sampling stations or site.

“We look forward to continuing to providing a suitable waste disposal facility for the county, economic security to our employees and a tax base for the community for many years to come and this additional landfill space will allow for that growth.  We appreciate and understand the community’s interest in our plans, and we will do everything we can to assure the community the environment and our quality of life is our priority.”

Anderson County Councilmen Jimmy Davis, has also heard the concerns from residents. Davis and SC Representative West Cox, wrote a letter to SC DHEC, urging them to host a public meeting about the proposal. Now a virtual public meeting will happen.

“Nothing is set in stone. No decisions have been made. It is a DHEC. It is a state application. So the county, our number one responsibility is to make sure the constituents that live in that surrounding area are notified by this and have an opportunity to participate,” Davis said. “I’ve had numerous of phone calls and emails, and the constituents out there are very very concerned. There’s a problem out there with the smell of the landfill and the road conditions with the trucks going in and out of the landfill. So there’s a great concern out there,” he said.

While a virtual public meeting will be held later this month, DHEC has determined that Wasteco Inc.’s application meets all technical requirements of the solid waste regulations, but who live nearby, are hoping for a different outcome.

“We have kids growing up in this neighborhood now. And I would like to see a little bit more regulation to check on that, to make sure they are abiding by the rules and everything for what they have now, verses expanding it and making it bigger,” Anderson said.

Estes said he doesn’t have a problem with the expansion, as long as the site is kept up.

“It could do a lot probably, but as long as they doing the right stuff and good things for people, it’s a good thing,” Estes said.

SC DHEC said a draft permit has been written, and is open for your public comment through March 5th.

DHEC will hold the virtual public meeting on February 18th, at 6:30 p.m.

They also said all comments will be considered before a final decision is made.

Click here to read more about the proposed landfill.

The website above will be updated periodically, and will contain information on how to participate in the public meeting.

Are plastic bag bans helping the environment? A look at results