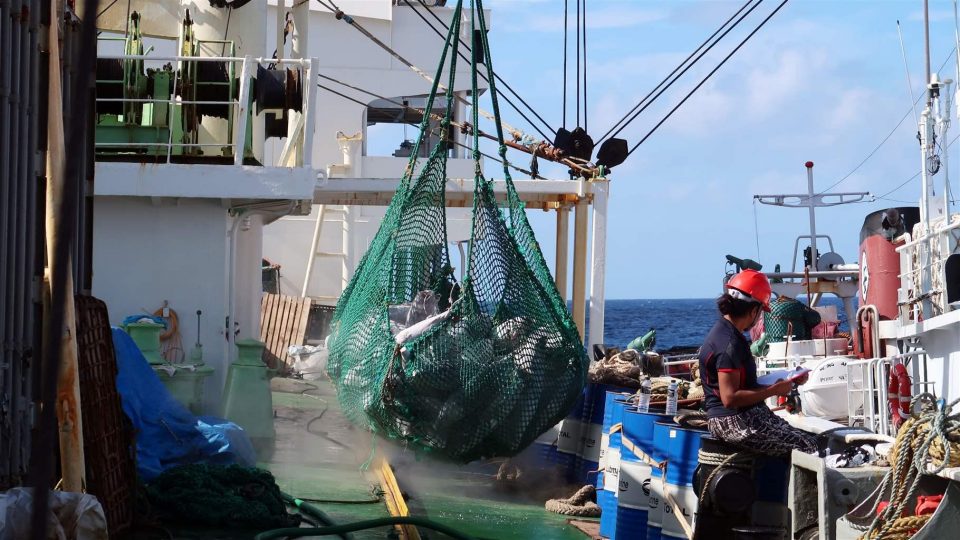 Transshipment, a vital but largely hidden part of the global commercial fishing industry, involves hundreds of refrigerated ships roaming the ocean, taking in catch from thousands of fishing vessels and transporting it for processing. Because most transshipments take place far out at sea – out of the sight of authorities – unscrupulous operators can hide or falsify data on where, how and when they fished and on the amount and type of fish they caught or transshipped.

To help RFMOs gain perspective and better understand the dynamics behind these processes, The Pew Charitable Trusts commissioned a series of studies that examine transshipment in the western central Pacific Ocean, the Indian Ocean and the Atlantic Ocean. These reports identify the key countries and companies involved in transshipments and analyze their activities to determine what reforms are needed to ensure the legal and verifiable transfer of catch. The reports all found worrisome trends in transshipment, a huge opportunity for illegally caught fish to enter the market and an urgent need for reform.

Global trends in transshipment: The rise of containerization

Across all three ocean basins, carrier vessels, the refrigerated cargo ships that often bring fish to port, are owned by a handful of companies – most linked to Japan, Korea, China and Chinese Taipei – even if the boats are flagged to a different country.

Carrier companies follow one of three basic operational models: They lease carrier vessels and crew to fishing companies, own or operate a fleet of carrier and fishing vessels, or act as middlemen and broker agreements to transship catch.

The reports also found a significant increase in another activity, called containerization, in which fish are offloaded directly into refrigerated containers for transport. Containerization can reduce freight costs and enable separation of mixed catch to reach a variety of markets and optimize profits. However, container vessels are used to transport a variety of goods and are therefore not usually governed by tuna RFMOs, and aren’t subject to the compliance measures that carrier vessels are – such as requirements to have human observers on board. This loophole is further compounded by confusion on whether containerization is defined as a landing, transshipment or import/export.

Last year in one of the reports commissiond by Pew, MRAG, a consultant group with a focus on sustainable fisheries, found that from 2011 to 2017, high-seas longline transshipment events increased by 60 per cent within the western and central Pacific Ocean. In 2017, approximately 50 per cent of these transshipments were conducted by Chinese Taipei-flagged vessels and largely involved the transfer of bigeye, albacore and yellowfin tunas. Interviews with staff at key high-seas longline transshipment companies revealed that many of them opted to transship at sea to avoid in-port inspections that could have resulted in fines for any number of violations. For these companies the intensity of in-port compliance regimes strongly influenced where transshipments took place.

The report also noted that most carrier vessels operating in the Atlantic are flagged to Panama, the Bahamas and Liberia – governments known in the maritime industry as flags of convenience because they largely shirk their oversight duties and offer vessel owners favorable tax arrangements and other benefits. In addition, the report found that at least half the carrier vessels on the International Commission for the Conservation of Atlantic Tunas’ vessel list are at an age where they could be considered for scrapping. These older vessels tend to report high rates of failed inspections, raising concerns about crew safety and the risk of oil spills and other environmental damage.

According to “Moving Tuna,” the third report commissioned by Pew, conducted by Nordenfjeldske Development Services (NFDS), most of the transshipment in the Indian Ocean takes place in the western region and involves transfer of catch from purse seine and longline vessels. Approximately 87 per cent of tuna is transshipped in ports, yet only 5 per cent of that activity is observed by port State authorities. Around 58 per cent of this tuna leaves the western Indian Ocean unprocessed – in containers or carrier or fishing vessels – and the rest is locally processed for transport to Asia, Europe or the United States for consumption.

As in the Atlantic, flags of convenience are common here: In 2018, the 26 carriers that were active in the western Indian Ocean were flagged to just eight countries: Japan, Chinese Taipei, Korea, China, Malaysia, Panama, Liberia and Singapore.

Much room for improvement in transshipment oversight

The three reports provide much-needed insight into transshipment and show that current oversight is insufficient to ensure a legal, verifiable seafood supply chain. Pew calls on RFMOs to adopt best practices that improve reporting and monitoring of transshipments, such as near real-time post transshipment reporting to all relevant authorities and 100 per cent observer coverage through humans onboard, or electronic monitoring systems.

The Pew Charitable Trusts thanks the Walmart Foundation for its financial support of the MRAG Atlantic Ocean analysis and the NFDS Indian Ocean report.

Jamie Gibbon is a manager, Esther Wozniak is a principal associate and Janelle Hagen is an officer for Pew’s international fisheries team.

Covid hasn’t interrupted Alaska’s resupply lifeline from Seattle, and woe if it does