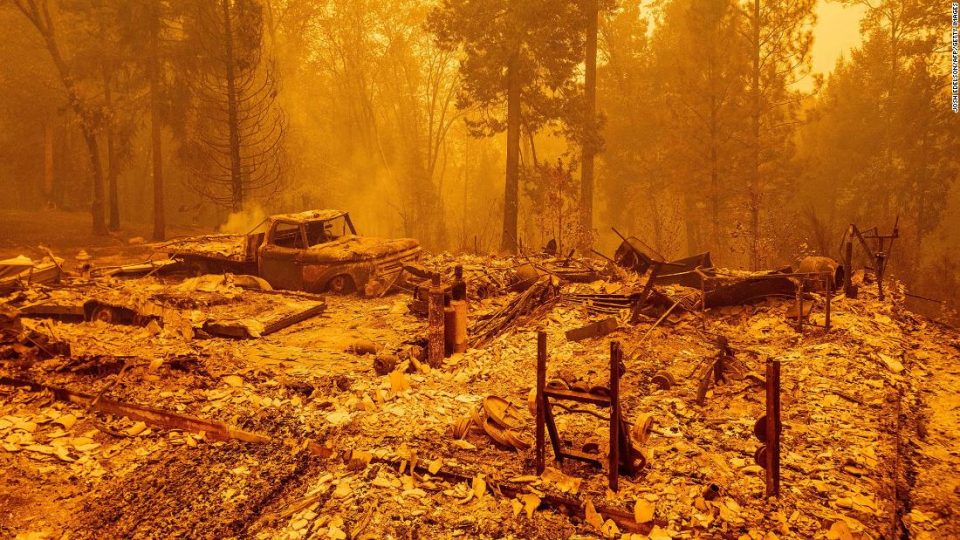 But on Monday, Trump and former Vice President Joe Biden will both address the fires, from opposite coasts, and in so doing, highlight the chasm between Biden and Trump on the issue.

Trump will likely not acknowledge the climate crisis facing the country and the world and instead continue talking about the need for forest management on his visit to California. In Delaware, Biden slammed the President for his climate denial and said the nation couldn’t afford a second term of Trump not making serious efforts to address the issue.

“Donald Trump’s climate denial may not have caused these fires and record floods and record hurricanes, but if he gets a second term these hellish events will continue to become more common, more devastating and more deadly,” he added.

As the nation shifted its attention to those scenes of devastation last week, Trump tweeted about the fires for the first time in weeks on Friday night, thanking the more than 28,000 firefighters and first responders fighting the blazes. On his Monday visit to McClellan Park, California, he’ll meet with local and federal fire and emergency officials in a part of the country that has contended with record-breaking temperatures and soaring levels of air pollution.
Over the Labor Day weekend, the agency that monitors air quality in Southern California recorded the highest level of ozone pollution in nearly 30 years. On Sunday, the Los Angeles Times reported that four cities on the West Coast — Portland, Oregon; Los Angeles; San Francisco and Seattle — ranked among the 10 most polluted cities in the world because of the fires.

The confluence of events led California’s Democratic Gov. Gavin Newsom to declare Friday that the debate over climate change is over: “We are in the midst of a climate emergency. We are in the midst of a climate crisis. We are experiencing weather conditions the likes of which we’ve never experienced in our lifetime,” a visibly agitated Newsom said Friday after surveying burned areas of the North Complex fire. “This is a climate damn emergency. This is real. And it’s happening — this is the perfect storm. It is happening in unprecedented ways year in, year out.”

Trump is expected to meet with Newsom Monday at a “wildfire briefing,” according to White House spokesperson Judd Deere.

But West Coast leaders don’t expect an acknowledgement of the climate crisis from the commander-in-chief during his visit to McClellan Park Monday. During an emergency operations briefing in Lake Charles, Louisiana, late last month, Trump shrugged off a question about whether storms like Hurricane Laura were becoming more frequent because of climate change: “Who knows,” he said, adding that he’d been told the area’s biggest storm was in the 1800s. “There’s no way of really understanding that or knowing that.”

At his rally in Minden, Nevada, Saturday night, Trump said Americans’ “hearts are with all of the communities in the West battling devastating wildfires,” but signaled that he will continue to blame “forest management” for the fires.

Ignoring the fact that human activity has led to the warming of the planet, creating record droughts and the dry, hot conditions that often serve as catalysts for forest fires, Trump insisted as recently as August that he’d told California officials “to clean your floors; you’ve got to clean your forests,” suggesting that leaves and broken trees were responsible for the fires.

Los Angeles Mayor Eric Garcetti scoffed at the President’s “forest management” explanation for the fires during an interview with CNN’s Jake Tapper on “State of the Union” Sunday.

“He’s going to come out here and probably tell us, ‘I’m going to send you rakes, instead of more help.’ We need actual help, material help, not based on our party affiliation or how we voted,” Garcetti said. “This is not about just forest management or raking — anybody who lives here in California is insulted by that, quite frankly. And he keeps perpetrating this lie.”

“I wish that we would get as much attention, not based on an electoral map, but just purely on being Americans and the need for leadership to be from the White House for all of America,” Garcetti said, “whether it’s twin hurricanes on the Gulf Coast or fires here on the West Coast.”

The White House has defended the President’s response to the Western wildfires, noting that last month Trump approved an emergency declaration for California and has approved some three dozen fire management grants for other western states, which the White House said provide a 75% federal cost share for the mitigation, management and control of fires.

White House trade adviser Peter Navarro also rejected Garcetti’s assertion that the speed of the federal response has been affected by whether state residents live in red or blue states: “That’s offensive,” Navarro told Tapper on Sunday, citing the Trump administration’s aid to blue states during the pandemic as evidence.

“If you look at what President Trump did, for example, for the city and state of New York, it was an incredible transfer of resources up there, ships, PPE. Everything that New York wanted, they got,” Navarro said. “So, please, Mr. Garcetti, take care of Los Angeles better than you are doing.”

The political fight over the fires is likely to only heat up this week as it permeates the presidential race.

The policy gulf between Biden and Trump on the climate crisis is one of the most striking contrasts of the campaign — one that surely will come up in the presidential debates that begin later this month. Anger about Trump’s decision to withdraw from the Paris climate accord, a landmark agreement to reduce emissions of planet-warming gases, has been a galvanizing force for young progressive voters who oppose the President.
Ballots have already gone out or are on their way to voters in some states, and the contrast between the two candidates in the midst of this climate crisis may be yet another reason some voters cast their ballots early.

This story has been updated with Biden’s comments on the climate crisis.