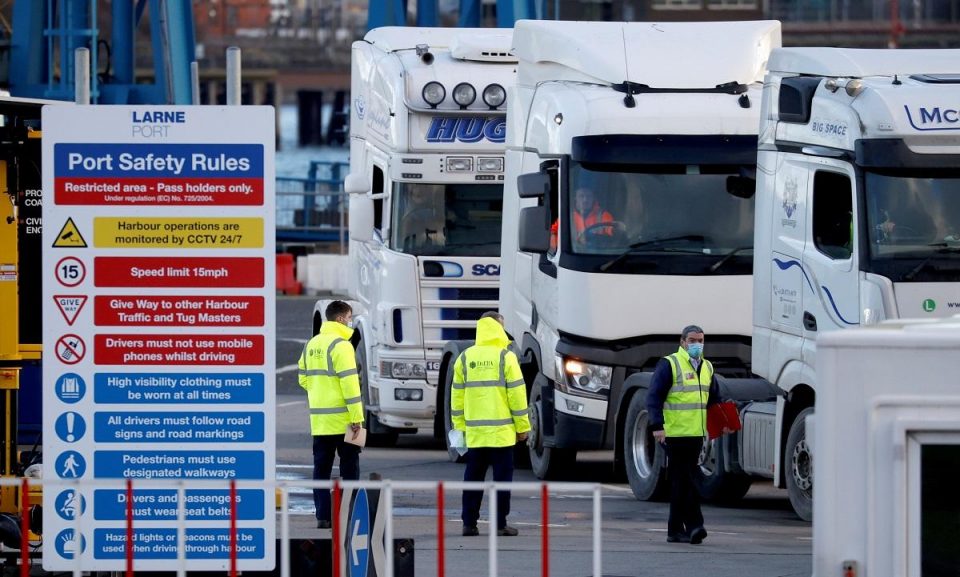 DUBLIN, Ireland — Northern Ireland’s supply chain is “within days of falling apart” as new post-Brexit checks stem the flow of freight into the UK province, hauliers warned on Monday.

Even with freight volumes running at “30 to 40 percent of normal volume” owing to coronavirus restrictions, new systems are struggling to cope with the new processes required to deliver produce from mainland Britain, he said.

“The thing is literally within days of falling apart,” Martin added.

Shoppers in Northern Ireland have highlighted on social media how some supermarkets have been sparsely stocked in the 11 days since the Brexit transition period ended.

Supermarket Sainsbury’s said last week that “a small number of products” were “temporarily unavailable” in the province “while border arrangements are confirmed.”

January 1 marked the date when the full effects of Brexit were felt, four years on from Britain’s seismic 2016 referendum decision to split with the European Union.

Special arrangements have effectively kept Northern Ireland aligned to the EU customs union and single market, to prevent the re-emergence of a hard border with the Republic of Ireland.

An open border was a key plank of the 1998 peace deal which ended 30 years of violence over British rule in Northern Ireland.

The move requires special checks on goods arriving in Northern Ireland from mainland Britain in case of the risk of them heading across the border into EU-member state Ireland.

London and Brussels agreed a pact in December to grant temporary “easements” from checks to supermarkets to ensure full supplies can be delivered in the months after January 1.

However Martin said the relaxation of rules “isn’t having an effect” because firms are choosing not to export to Northern Ireland.

Meanwhile, customs brokerage houses “cannot cope with the demand” of produce that is arriving and a new UK government scheme designed to handle import paperwork for traders is at “maximum capacity,” he said.

UK Prime Minister Boris Johnson had promised Northern Ireland businesses last November there would be “no forms, no checks, no barriers of any kind” on goods crossing the Irish Sea after Brexit.

He told one businessman that if he was asked to fill in customs forms, “tell them to ring up the prime minister and I will direct them to throw that form in the bin.”

Northern Ireland hauliers are also beginning to operate at an unsustainable loss as they transport empty lorries back from Great Britain—endangering the viability of the supply chain.

Martin estimated 30 percent of goods in Northern Ireland travel via Dublin Port, the largest freight hub in the Republic of Ireland.

However there has also been evidence of a post-Brexit slump in trade traffic between that port and Great Britain.

The firm said “problems in the supply chain have resulted in a significant fall off in freight volumes.”

And last week Irish Revenue said many importers “significantly underestimated what was involved in being Brexit-ready” as it relaxed paperwork to “get their goods moving.” — AFP

How covid-19 is speeding up the modernization of supply chain