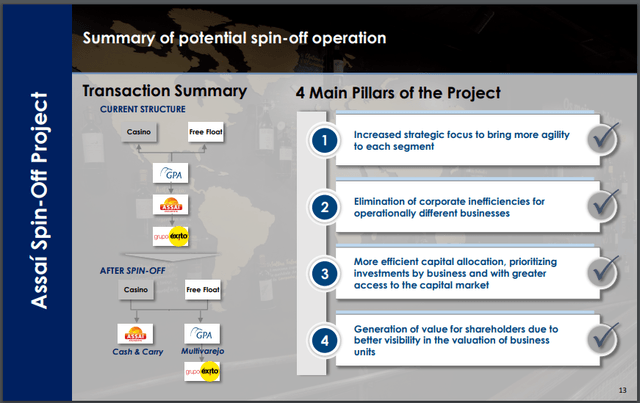 Companhia Brasileira de Distribuição (CBD) is in the process of a spin-off of its wholesale division Sendas Distribuidora. Throughout this article, I will refer to Companhia Brasileira de Distribuição as Grupo Pao De Acucar or as GPA to be coherent to how Brazilians refer to the company. I will also refer to Sendas Distribuidora S.A. as Assai. GPA is in the process of spinning-off Assai. I decided to analyze Grupo Pao De Acucar because a news feed that I received mentioned that its CEO resigned. His resignation seemed a little out of the ordinary for me as it wasn’t previously announced and was effective immediately upon announcement.

An investment in CBD comes with more risks than an investment in a similar U.S. based business. The exchange rate could prevent investors from realizing a return on investment, even if the company’s equity value increases. Investors in CBD are exposed to the Brazilian Real, Argentine Peso, and other South American currencies.

The Spin-off Of Sendas Distribuidora S.A.

As I mentioned in the introduction, GPA will spin-off its wholesale division called Assai. This division of the company started out operating as a cash and carry wholesaler. I need to give you some context on how Brazilian grocery stores operate here in Brazil before I go into details about the spin-off. Since most readers will understand Walmart’s (WMT) operations, I will use its operations to compare.

GPA’s supermarket operation is referred to by the company as the Multivarejo Business. Multivarejo roughly translates as multiple retail, which in this context means supermarkets and grocery stores. GPA will continue operating the Pão De Açucar and Extra brands after the spin-off. Grupo Exito will become a subsidiary of GPA in the post-spin-off corporate structure.

Pão De Açucar has a similar concept to the Walmart Neighborhood Market. Extra is similar to the Walmart Supermarket concept. Pão De Açucar is more oriented to attending the A and B social classes’ needs, while Extra and other brands focus on the B to E classes. Multivarejo accepts multiple payment forms and typically allows its clients to “quasi finance” their purchases with two to three interest-free installments.

Figure 1 demonstrates the current corporate structure and the proposed corporate structure (post-spin-off). Each organization will have its own organizational structure and will report to its own board. Assai applied for registration to be a publicly traded company in Brazil, and this was approved by Brazilian regulators (referred to as CVM). Assai is working to register with the SEC, and the company plans to issue ADRs. The fact that the GPA plans to have both companies registered in the United States makes me believe that the company plans to give current shareholders of PCAR3 (ticker for the common share in Brazil) and CBD a stock dividend of Assai.

The next step will be to get shareholders’ approval, which requires a majority (50%). The Casino Group owns a little more than 41% of GPA’s total shares outstanding, so they will need other investors to get on board with the spin-off idea.

Estimated Financial Effects Of The Spin-Off

I do not believe that shareholders will benefit from the spin-off of Assai, as I will explain in the following paragraphs. In Figure 1, we see the four main pillars of the spin-off. Any of these four pillars could be accomplished without a spin-off, in my opinion.

In 3Q20, the company’s net debt was R$ 9,785 million, and a year earlier, it was R$ 2,341 million. This significant increase in net debt resulted from the company’s decision to acquire Grupo Exito. Its net debt to TTM Adj. EBITDA increased from 0.7x to 2.1x during the same analysis period. Due to these high levels of debt and the company’s mention of greater access to capital markets in its spin-off pitch, I believe that one of the companies (most likely Assai) will issue new shares during the spin-off to decrease net debt.

On average, GPA’s corporate expenses decrease the EBIT by about 43 million reais. After the spin-off, there will need to be a corporate structure for both companies (Multivarejo and Assai). That means there will be two accounting teams, IT teams, financial teams, Boards, etc. I predict that after the spin-off, the sum of both companies’ corporate expenses will be greater than the current average.

Over the past five days, CBD has traded at a Price to TTM EBIT of 6.5x. If investors continue to value each separate company at 6.5x EBIT and EBIT decreases due to increased corporate expenses, the company’s market value will decline. This is just one piece of the puzzle. I didn’t mention the probability of an increase in sales cannibalization, which would reduce profitability (decrease in gross profit). I didn’t mention how each company will need to have its own supply and logistics unit when they can share them (decrease in gross profit). I am bearish on CBD as I fail to see how the spin-off will add value to current shareholders as corporate expenses will probably increase. In my opinion, the CEO’s resignation should be a red flag for investors.

If you like what you read, please “Follow” me via Seeking Alpha. I typically only cover the Brazilian markets, the Robotics Industry, and the Food Industry.

Despite Progress, Europe Remains in a Fierce Fight With the Virus