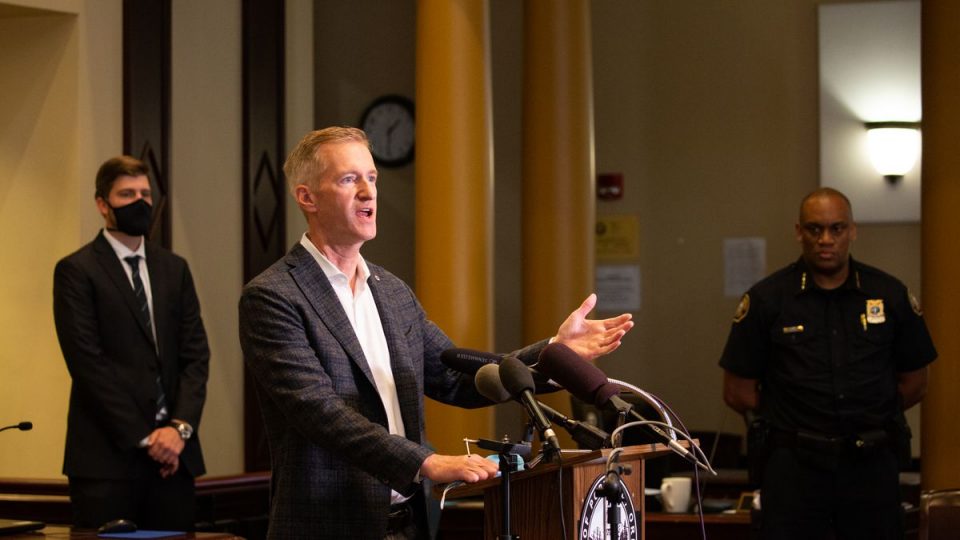 The city of Portland maintains that the federal deputation of city police officers is no longer in effect, after city officials have explicitly told the U.S. Department of Justice they do not want the officers to retain the status of federal marshals.

“It is the City’s legal position that the federal government may not deputize Portland police officers, nor require them to perform any functions, without the City’s consent,” said Jim Middaugh, the mayor’s director of communications. “The City has formally withdrawn its consent.”

As part of the law enforcement response to a Sept. 26 Proud Boys rally in North Portland, the U.S. Marshals deputized most of the bureau’s rapid response team, the officers responsible for policing protests. But the 56 deputations extend through the end of the year, well beyond the weekend rally.

Despite the city’s request, the U.S. Attorney for the District of Oregon Billy Williams has refused to end the designation, a move the city sees as a significant — and likely illegal — overstep by the U.S. Department of Justice.

But it may not matter where the city comes down on the issue. Federal officials have made it clear they believe the deputations are still in effect and the city’s consent is irrelevant. Until the courts weigh-in, the deputations have paved the path for the federal government to become increasingly involved in charging protesters, circumventing Multnomah County District Attorney Mike Schmidt, who has declined to bring low-level charges against protesters.

Some legal scholars argue the law is on the city’s side. On Tuesday, City Attorney Tracy Reeve sent a note to the DOJ formally withdrawing Portland’s consent. Tung Yin, a law professor at Lewis and Clark Law School, said he believed it should have been enough to put the issue to rest.

Wheeler has since sought to wrest back control by directing the Portland Police “to take no further action of any kind pursuant to the federal deputation,” according to Middaugh. That includes barring deputized officers from making arrests under federal law.

“In other words, PPB officers should act as if the deputations were not in effect,” he wrote.

Despite Wheeler’s order, protesters could still face federal jail time for charges Schmidt, elected with an overwhelming 77% of the vote, has declined to charge.

“One of the biggest takeaways of this particular situation is that it highlights how little control local officials have over the police,” said Chris Shortell, a Portland State University political science professor specializing in the relationship between law and society. “And I think that runs contrary to the public’s expectation and general thinking about the relationship between elected officials and police officers.”

Federal prosecutors can’t press charges for a crime that doesn’t involve federal interests. For example, if a protester throws a firework at the federal courthouse, “they are now subject to federal charges because that’s federal property,” Shortell said.

“If they do the same thing to the Justice Center, there’s nothing federal about that.”

The deputations don’t change that.

City and state law enforcement officials said the deputations will allow federal prosecutors to charge anyone who attacks an officer with assaulting a federal officer — a charge that brings a harsher penalty than the state equivalent.

Portland police officers have made relatively few arrests for assaulting an officer during more than four months of protests for racial justice in the city. But they’ve made scores of arrests for interfering with a peace officer, a low-level misdemeanor that police have applied loosely during demonstrations, and a charge Schmidt has said he likely wouldn’t pursue.

Shortell said if a federally deputized officer arrests someone for interfering with a peace officer, however, Schmidt’s policy may be irrelevant.

Whether or not lower-level charges like interfering with a peace officer become an issue could hinge on how aggressively federal prosecutors decide to pursue cases, and legal specifics of the deputations appear muddy, even to government officials at every level.

In an email to local law enforcement and the city attorney Sept. 28, Assistant U.S. Attorney Suzanne Hayden said an assault on a federal officer charge “generally hinges on a federal interest (e.g. protecting a federal facility) or federal control over an investigation.”

That assessment of the legal framework to bring charges seems to contradict statements by OSP and PPB explaining the deputations. In a Sept. 26 tweet, OSP said the deputations “will allow federal prosecutors to charge allegations of assault on a federal officer to anyone who attacks Officers.”

And a U.S. Marshals spokesperson told OPB anyone who attacks a federally deputized officer could face federal charges.

Protesters arrested and charged by federal prosecutors will find themselves in the middle of this complex legal turf war between city leaders, local law enforcement, and the federal Department of Justice.

Putting state police in charge of the protest response effectively sidelined Portland City Hall, who did not learn about the deputations until Monday. Wheeler said deputations for any length of time had not been part of the discussions he and Commissioner Jo Ann Hardesty had with the governor in preparation for the Proud Boys rally.

According to Wheeler’s spokesperson, Portland Police Chief Chuck Lovell consented to the deputations on behalf of the city.

Lovell’s involvement could be a key sticking point in whether city officers are still technically deputized or not.

Shortell said it is likely Lovell who needs to withdraw consent from the agreement, not the mayor. Portland police didn’t respond to questions asking if the police chief had done so.

Brown hasn’t commented on the deputations other than to say she did not know beforehand that they would go through the end of the year and that she left the law enforcement response up to Hampton and Multnomah County Sheriff Mike Reese.

Complicating the situation, Brown is in an uneasy position with the federal government at the moment. With massive wildfires burning through large portions of the state, the governor needs federal assistance and may be reluctant to start a legal fight, Shortell said.

“She knows that the Trump administration is notorious for being pretty vindictive when governors publicly and visibly cross them,” he said. “And so you’re going to pick your battles in that situation.”

Yin said he believes the city, too, would have a strong case if they sued. But officials with the city, which Trump has routinely painted on a national stage as an “anarchist jurisdiction” and threatened to pull federal funding from, may have their own reasons for not wanting to provoke the administration.

Regardless of whether city or state officials launch a legal challenge to the deputations, the issue is likely to be resolved in a courtroom. If the federal government considers Portland police officers to be federally deputized, federal prosecutors could bring charges against demonstrators.

“Certainly a defense attorney in those circumstances is going to make the argument that there should not be federal charges brought here and the federal courts do not have jurisdiction,” Shortell said. “It’s going to be up to a federal judge to decide which argument they find more persuasive.”

Portland officers serving an open-ended stint as federally deputized marshals is the latest action by the federal government and local police meant to stop the nightly racial justice protests which have vexed law enforcement for months. But its effectiveness toward that goal remains to be seen.