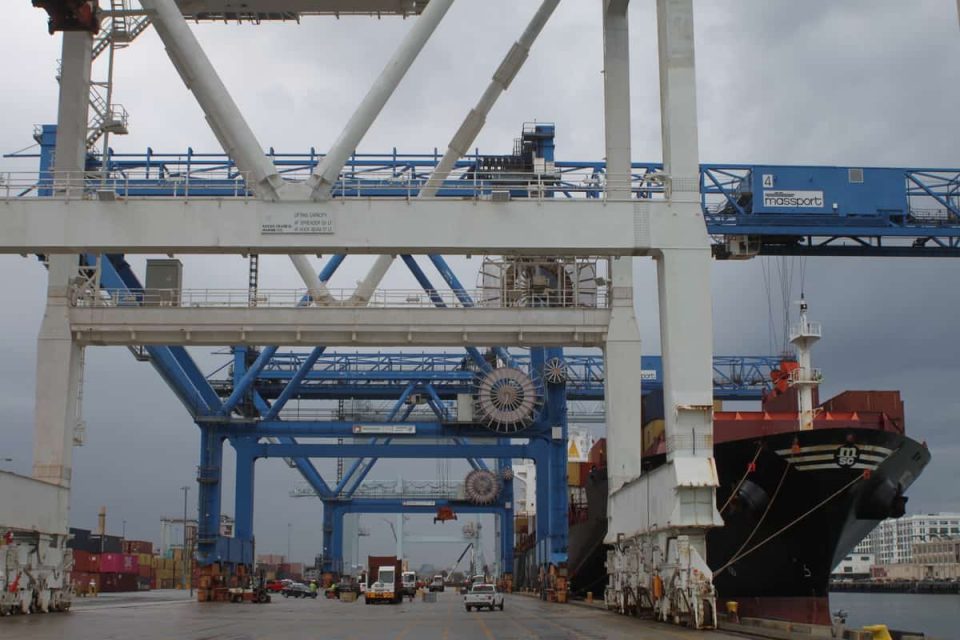 Parts of Conley Terminal are more like a construction site than a container ship dock, Like much of South Boston already has, it is undergoing a major renovation.

Conley Terminal is the second maritime property of the Massachusetts Port Authority (Massport), the other being a cruise ship terminal. And it is the site of $800 million in capital improvements aimed at bringing more freight and making it a preferred gateway into one of the fastest growing U.S. cities, as well as the greater New England region.

Marine terminals to the south and to the north dwarf the 100-acre site. But its small size belies a hunger for more freight.

“If you can provide a consistent gateway that can provide good service, that’s the base for the BCOs,” said Mike Meyran, acting port director. “We’ve invested a lot to move the trucks faster. That’s one less thing for them to have to worry about.”

The port, which moved 307,331 twenty-foot equivalent units last year, is looking to add capacity to handle 450,000 TEUs, with an ultimate goal of 600,000 TEUs in capacity. Size-wise, Conley is looking to expand 30 acres.

Conley is getting help as the U.S. Department of Transportation awarded Massport a $20 million grant toward the project.

The largest part of the project spend is $350 million toward dredging Boston Harbor to 47 feet. Workers at Conley are installing pylons for a new 1,000-foot ship berth. Once the new berth is completed, Massport will also add three neo-Panamax cranes, with lift height of 160 feet and an outreach of 22 rows wide, capable of handling ships up to 14,000 TEUs.

Those cranes are next to six that are just under 100 feet high due to the air restrictions from nearby Logan Airport.

On the land side, Massport added four rubber tire gantries for container handling this year, bringing its fleet to 16. On the terminal’s southern side runs the 2-year-old, $75 million Butler Freight Road, which diverts truck traffic off local streets.

The old road was typical of South Boston, with “a lot of tight turns and was very inefficient for the truckers to drive through,” Meyran said. Massport is also considering another truck corridor that will connect to I-93.

Massport will also raze the old truck gate and install a new one with 10 inbound and 6 outbound lanes, kitted with the latest in terminal technology.

“That’s sort of what’s given us the edge over New York-New Jersey, being virtually congestion free,” he said.

The price also helps. Amy Elmore, director of international logistics for Bob’s Discount Furniture,  said the all-in cost of a container move through Boston is $400 to $500 less than a comparable move through the New York-New Jersey gateway.

While the ocean rate is higher into Boston, the costs of drayage, chassis and tolls through New Jersey and New York into Massachusetts make it less competitive. CSX also offers weekly rail service from NY-NJ to Worcester, about an hour outside of Boston.

Conley is “a very efficient and cost-effective port for us,” Elmore said. “We want to see them succeed.”

Massport’s Meyran said Boston is competitive with NY-NJ for moving freight as far west as Albany. Likewise, Conley can be competitive into other New England states, which can also be served by drayage from the port of Montreal.

In addition to the physical makeover, Meyran credits an operational makeover through a 2012 labor agreement with the local International Longshoremen’s Association (ILA) with helping boost productivity at the port.

“We were the least efficient port on the U.S. East Coast,” Meyran said. Since then, the port has been able to boost efficiency by one-third and Massport has a “great relationship with labor.”

Shawn Fox, head of North American sales at Swift Fox International Logistics, remembers the bad old days at Conley. As a trainee for U.S. Lines in 1985, his job was to check equipment at the dock, a task usually reserved for a longshoreman.

Just before his Christmas break, a Massport snowplow drove into Fox’s car, destroying it. At the time, longshore labor handled snow removal at Conley. U.S. Lines itself pulled out of the Boston market because of “slow labor, no work in the rain, slow gate turns and walkouts all the time,” Fox said.

The trick now for Conley will be to attract more container services. Right now, the port is only served by a once-weekly MSC service from Europe and two China services from the Ocean Alliance and THE Alliance.

Southeast Asia is the growing freight origin for much of the East Coast. But the lack of direct service into Conley means trans-shipping through another port, a logistical headache in ocean freight.

“Southeast Asia is the next big one for us,” Meyran said. “That will come with the increased capacity at the terminal. The timing in the market shift is perfect and I think we are positioned well.”