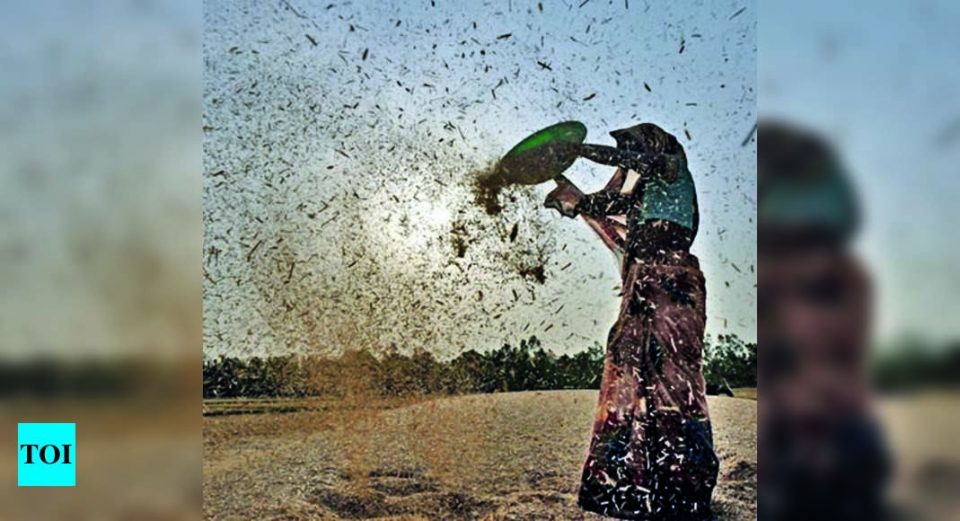 Chandigarh: The poor arrival of wheat for government procurement in Haryana has not just left agencies worried about their target, but also impacted the prospects of commission agents. In all, the state has achieved only 48% of procurement target for the season. Even the announcement of extending dates for procurement till May 25 has failed to add to the target.
Enquiries revealed that till Saturday, Haryana had procured 42,77,292.3 tonnes of wheat against the procurement of 84,93,145 tonnes last year. The government had fixed a target of 90 lakh-plus tonnes for this year. Relying on brokerage, arhtiyas also look forward to the repayment of debts given to farmers. Normally, farmers either repay or get loans adjusted towards proceeds of their crops. Even as the government has started direct bank transfer (DBT) for farmers, the concept of taking a loan from commission agents continues.
Sources said farmers had either preferred to sell their produce to private players or had stocked grains at their houses in the hope of getting a better price from corporates. “On an average I would get brokerage for around 10 lakh bags. But, this year, I have not crossed 1.25 lakh bags. What to talk of getting brokerage, I am not expecting anything now. Even farmers who would normally come to settle their accounts are now talking about repayment after paddy season,” said Lakbir Singh, an arhtiya from Ismailabad. “As a result, we are now dependent on taking loans from the open market to meet our needs,” he added.
Bajrang Garg, state president of Haryana Pradesh Vyapar Mandal, said arhtiyas get 2.5% commission on the purchase of wheat and this time only half of the wheat had been procured as compared to last year. In such a situation, 50% of the income of the arhtiya was reduced. At the same time, the expenses of arhtiyas have increased, due to which they had suffered bigger losses. He said due to less procurement of wheat, workers, contractors, stitchers and wheat-cleaning workers had also suffered loss of wages.
Satyaprakash Arya, an arthtiya from Hisar new grain market, said last year, he purchased seven lakh bags of wheat, but this time the figure was just one lakh. “Many arthiyas have lost up to 80% in brokerage,” he said. Sandeep Malik, an arhtiyas in Jind, said grain markets received 30% less wheat crop this season. “The less production led to more debt on farmers, as they failed to make full payments to arhtiyas. Farmers used to take debt from arhtiyas and pay it after selling crops in mandis, but due to adverse weather and early heatwave, they had to suffer losses,” he added.
previous post