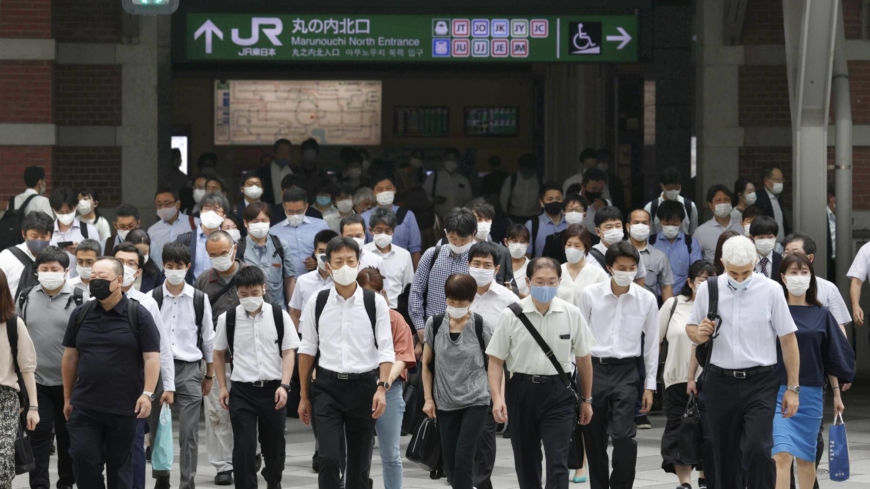 Prime Minister Yoshihide Suga’s decision to yet again impose a coronavirus state of emergency, effective Monday, centered on a political move to head off criticism from the public rather than a scientific judgment over what would stifle a new wave of the virus.

Although the sense of urgency associated with the emergency may have been diminished by their repeated use — this is the fourth time the measure has been implemented — and business activities will be disrupted, the Suga administration calculated that the political fallout from not declaring it would outweigh the merits of maintaining the status quo, further exposing Suga to intense criticism over perceived inaction.

Tokyo and other areas were under a quasi-state of emergency as of Sunday, and it was believed that the government would continue the measure because many indexes, such as the hospital bed occupancy rate, stood at Stage 3 — not the highest-level Stage 4 that warrants issuing the emergency.

Declaring the emergency in Tokyo was an unexpected about-face from the administration.

“As the vaccination speed picks up significantly and we begin to see an end to this fight against the coronavirus, we absolutely must avoid triggering an outbreak originating in Tokyo again,” Suga said during a news conference Thursday evening. “With this desire in mind, I decided to re-declare a state of emergency in Tokyo as a proactive and preventative measure.”

In general, the administration has been reluctant to invoke the most stringent option legally available to it in terms of limiting individual rights. With the Olympics set to start on July 23, the state of emergency has blemished the games’ significance, something which Suga had characterized as “proof that we vanquished the virus.” Both the central government and the Tokyo Metropolitan Government were eager to stage the games with a limit on spectators under the quasi-measure, instead of with no audience under the state of emergency.

In the weeks leading up to when a state of emergency was issued in April, administration officials were reluctant to carry out a measure they viewed as a last resort. Instead, the central government pressured local municipalities to step up, before ultimately caving to demands from certain governors and the general public.

Underlying the surprise at Suga’s decision is the fact that the administration could have, for example, tightened existing restrictions on the sale of alcohol without declaring a state of emergency.

The administration had revised quasi-emergency measures such that, in principle, alcohol cannot be served at restaurants where the measure is in force — but governors could relax the rules as long as restaurants comply with health regulations.

The biggest difference between the two measures is that a state of emergency allows local governments to request and order businesses to shutter temporarily for the sake of public health.

But as new cases crept up, keeping the status quo became an enormous political risk.

Suga’s team was well aware of the resurgence in Tokyo, attributed to increased foot traffic and the delta variant, and the tide started shifting in favor of a fourth state of emergency last Tuesday, when new cases jumped to 593, an almost 25% increase from the same day the previous week. On Wednesday, 920 new cases were logged, a 29% jump over a week before, a decisive indicator that extending the quasi-emergency measures would not be enough.

Even if Suga had chosen to prioritize the economy and holding the Olympics with spectators at the expense of rising cases, public health experts would likely have openly defied his initial decision not to opt for an emergency, as they have done so before. The prime minister would have faced much harsher rebukes if he had doubled down on prolonging the pre-emergency measures, both from the experts and the public.

Adding to these concerns was the Liberal Democratic Party’s flagging popularity.

Although the LDP became the largest party in the recent Tokyo Metropolitan Assembly election, which is seen as a prelude to a national poll to be held later this year, the party only gained 33 seats, well short of the roughly 50 it was projected to achieve.

Suga’s Cabinet approval increased slightly this month from the previous month, when it hit a record low in multiple polls, but the delay in the vaccine rollout in various places is raising questions about the government’s handling of the pandemic.

Still, Suga’s decision is unlikely to translate into public support. As a general trend, his Cabinet’s approval ratings tend to fall as the number of new cases rises. In addition, the public is already exhausted with living under restrictions and dissatisfied with the contradiction that the Olympics will go on while restaurants serving alcohol are being asked to close.

Even some administration officials are not sure whether the public will adhere to the fourth emergency.

“We just have to believe in the emergency’s effectiveness,” a senior administration official said last week. “We’ve done pretty much all we could do at this point. All we have left is willpower, as in ‘Are we really going to limit activities during the day?’”

In a time of both misinformation and too much information, quality journalism is more crucial than ever.
By subscribing, you can help us get the story right.

Signs Its First International Partnership With the Portuguese Wholesaler Bluetooth

Weather The Storm With Owens Corning