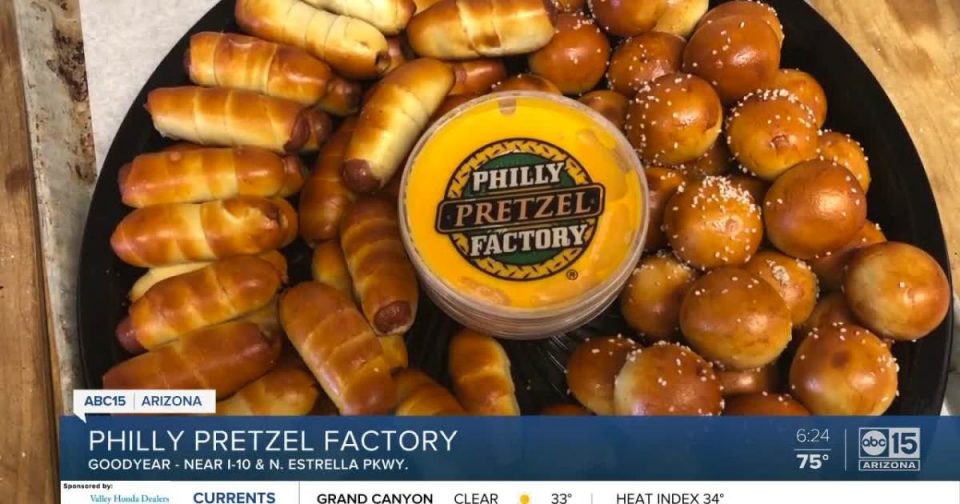 GOODYEAR, AZ — Professional sports may not be back in Arizona (yet), but that does not mean you can’t get a piping hot pretzel to curb those cravings.

That’s because Philly Pretzel Factory has reopened under new ownership near North Estrella Parkway and Van Buren Street in Goodyear, months after it unexpectedly closed and less than a year after it first opened.

“We both grew up eating Philly pretzels,” said Steve Dyal, who now owns the Goodyear franchise with wife, Kathy.

While pretzels are the staple, the menu spreads a bit wider than pretzel twists and pretzel bites.

They also have cinnamon-dusted pretzels, pretzel hot dogs, mini hot dogs, and mini cheesesteaks, as well as eight dipping sauces, such as mustard, spicy mustard, Cheddar cheese, and for those with a sweet tooth, buttercream, cinnamon, and brownie batter.

The dough is mixed and the pretzels are twisted each morning, said Steve. They’re then placed in the freezer to proof and are then baked fresh as needed.

“We have people driving an hour just to get the pretzels,” he said.

In light of the COVID-19 pandemic, like many other places, a Plexiglass barrier has been added to the register to separate the employees and guests, and a table has been placed in front of the register to social distance even further.

Now, as for who makes the best pretzel twist?

“We both make the same pretzel,” said Steve.

“We do,” said Kathy. “I did win the twisting contest in Philadelphia in training. I did win, but I think we both are the same and they look great.”

China Inc rejects Cambodia as it searches for factory locations