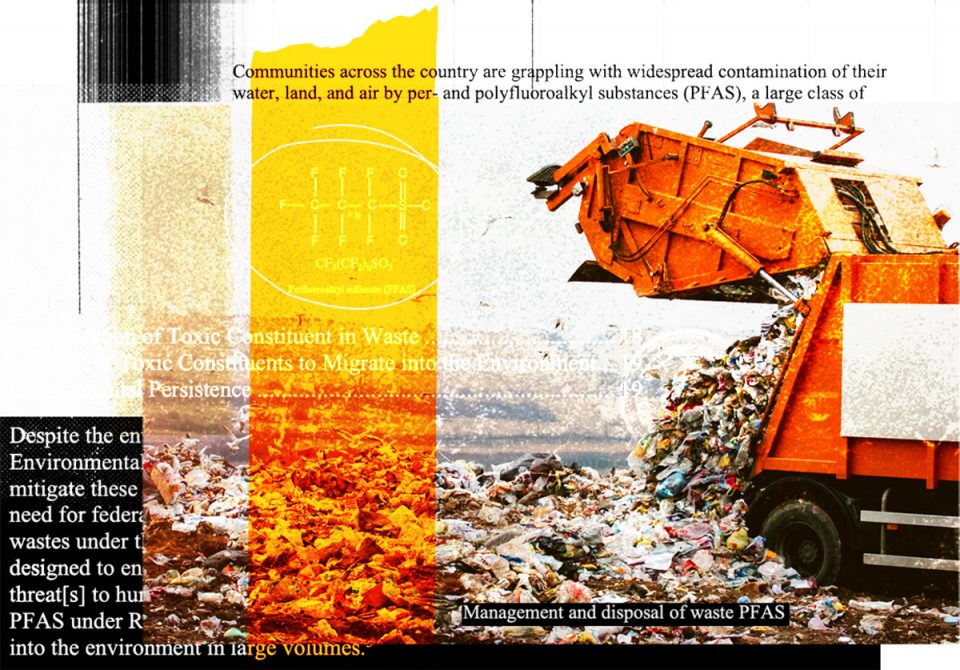 Data collected by EPA indicates “forever chemicals” are widespread in the waste stream and have limited federal oversight, bolstering cries from states and advocates who say the agency should crack down to rein in a severe public health and environmental threat.

Waste shipping information reported under the Resource Conservation and Recovery Act, the nation’s waste law, previews the extent to which PFAS are disposed of along with hazardous material nationwide. The data, spanning between 2018 and August 2021, is likely only a fraction of the true presence of per- and polyfluoroalkyl substances in the waste stream. But that tiny snapshot shows roughly 6,545 shipments of almost 14 million kilograms of PFAS-laden waste traveling across the country.

Little is known about how that waste is treated and managed, despite research linking a number of PFAS to health problems, including cancer, and environmental impacts, like drinking water and groundwater contamination.

“What stands out is how little we know about the quantity of PFAS hazardous wastes moving through communities,” New Mexico Environment Department Deputy Cabinet Secretary Rebecca Roose told E&E News. “This data truly constitutes the tip of a very dangerous iceberg.”

Some elements of PFAS disposal have drawn attention before, particularly amid controversy over the incineration of aqueous film forming foam — commonly used by the military and firefighters to contain spills and other crises (E&E Daily, March 25, 2021). But EPA’s data, reviewed and analyzed by E&E News, offers a new look at the universe of PFAS in waste.

Incineration, for example, is the leading disposal method. Additional methods include landfills and fuel blending, as well as “other recovery or reclamation for reuse” and neutralization, among others.

David Bond, a professor at Bennington College in Vermont who has focused on environmental issues relating to PFAS, said that several methods raised questions for them. Fuel blending, for example, has been panned as a “loophole” that allows for PFAS to be diluted along with other waste and then sent to cement kilns and incinerators. EPA data also includes a reference to “open burning,” which the agency said is uncommon but can occasionally be used for explosive wastes that cannot be safely disposed of in another way.

Around half of all waste documented as containing PFAS, however, has been listed as destined for “storage, bulking and/or off-site transfer,” indicating that waste has changed hands. The final destination is unclear from the data, but multiple advocates familiar with EPA’s processes said that management approach was not a final disposal method.

The agency’s data also include details about PFAS waste at the state level. Facilities in Washington state, for example, both generated and received the most shipments of waste with PFAS. That appears to hinge on the Puget Sound Naval Shipyard, a transfer area for material bound for other areas.

Reasons behind the numbers could vary. Waste that includes soil, for example, is heavier, and could be a factor in why a Nevada U.S. Ecology site might have emerged as the top recipient per kilogram in the past two years. Still, many questions remain about the data and what it means.

“Disposal is the carnival room of smoke and mirrors with the PFAS issue right now,” Bond said.

PFAS are not regulated under RCRA, and the facilities disclosed the presence of PFAS in their waste voluntarily. The information comes from an EPA database where the chemicals have been reported through a RCRA e-manifest system tracking hazardous waste shipments.

A nonprofit watchdog group, Public Employees for Environmental Responsibility, shared information from the database with E&E News after obtaining it through a public records request. What EPA has collected has compounded the group’s concerns about PFAS waste.

“These data show that we are steadily poisoning ourselves, our waters, and our food chain with an extremely persistent toxic chemical,” said PEER Executive Director Tim Whitehouse.

An EPA spokesperson said the agency is committed to strengthening oversight of PFAS waste and cleanup. Pointing to work underway evaluating four chemicals under RCRA, the spokesperson called EPA’s current efforts “a necessary building block for future work to regulate PFAS as a listed hazardous waste.”

A push for regulations

Multiple players in the fight over PFAS regulations have been steadily mounting their calls for EPA to take a much stronger role in overseeing the waste stream.

In 2019, PEER petitioned EPA and argued PFAS should be regulated under RCRA. The following year, an environmental coalition followed suit, calling for some of the chemicals to be targeted under the statute. Neither petition has received a response.

Claudia Polsky, a University of California, Berkeley, law professor who represented the groups behind the 2020 petition, pointed to RCRA as key in efforts to clamp down on PFAS.

“There are some examples of EPA having used RCRA to designate classes of chemicals [before],” Polsky said. “The statute is cradle to grave, it monitors the whole life cycle. And you end up with this really robust paper trail.”

Environmental groups are far from the only proponents pushing for more oversight of PFAS in waste. New Mexico Gov. Michelle Lujan Grisham, a Democrat, petitioned EPA in June to tackle the chemicals under the statute. The agency said it would partially grant New Mexico’s petition, initiating a rulemaking to propose listing the most studied of the chemicals as hazardous constituents (E&E News PM, Oct. 26, 2020). RCRA hazardous wastes are automatically hazardous substances under the Comprehensive Environmental Response, Compensation and Liability Act, or Superfund law.

Roose, of New Mexico’s environment department, said EPA’s scant data on PFAS disposal underscores the need for action. There are over 2,300 RCRA-regulated waste generator facilities in New Mexico, for example, but only two appear to have volunteered information about PFAS to EPA.

“[We] cannot begin to understand the presence of and risk from PFAS waste in our communities without the same requirements on generators, transporters and disposal facilities that we rely upon for all other hazardous wastes,” said Roose.

Landfills and incinerators have little control over the waste they receive, making them inevitable hubs for PFAS contamination. Even if a waste site is in complete compliance with RCRA, the chemicals come out in byproducts like leachate (contaminated liquid from a landfill), which must then be addressed elsewhere.

“We certainly want to ensure that PFAS is regulated to protect human health and the environment,” said Jesse Maxwell, who manages advocacy and safety work for the Solid Waste Association of North America. “But we think at this point that the focus should be upstream and on trying to reduce or eliminate PFAS in materials. If you have an overflowing bathtub, you turn off the water first.”

PFAS contamination is among the biggest problems facing the waste industry. Some companies maintain they could ultimately play a key role in managing PFAS waste, helping to protect the environment and the public. But with so little known about best practices and with EPA guidance remaining vague, the industry remains in limbo.

Maxwell said SWANA members have been more focused on looming Superfund designation for two chemicals, PFOA and PFOS, which could affect the waste industry. The organization is also following RCRA developments, however, with mixed sentiments. A unified federal approach is preferred by many waste operators, Maxwell noted, given the patchwork of regulations appearing at the state level.

But costs remain a hurdle, particularly for municipally owned and operated landfills. Especially in the Northeast, a number of operators are struggling with wastewater treatment plants rejecting leachate due to regulatory concerns, while others are grappling with spiraling expenses around treatment options.

The communities worst hit by PFAS contamination have been clustered near major chemical manufacturers or sources like military sites and airports. And the ubiquitous nature of the chemicals have made them in some ways an “equal opportunity poison,” according to Polsky, the environmental law expert.

But waste sites have a long history as a major source of environmental inequities. Many are in low-income communities of color. While PFAS already permeate these sites, Bond of Bennington College said the lack of EPA oversight has left public health and environmental protections exposed at a key time.

“There’s a rush to get rid of what PFAS you have before they’re designated as a hazardous waste,” he said. As PFAS in the waste stream become more likely, he continued, “exposure front lines are shifting” and making disposal sites a more pressing concern.

Unwilling to wait on EPA, states have moved ahead with their own efforts to rein in the disposal process. Most have targeted incineration, particularly the burning of AFFF. Certain high-profile events have also spurred those movements along, including possible contamination from the incineration of PFAS-laden firefighting foam in New York. That controversy led the state to ban the incineration of the foam (Greenwire, Nov. 25, 2020).

Even as states push forward, however, many want more guidance and help from EPA. New Mexico asserted that it will continue to push for regulation, citing both environmental justice concerns and ongoing fallout from Department of Defense legacy waste. Without a national framework, Roose observed, it will remain impossible for states to assess the true presence and risks posed by the chemicals.

“We cannot simply rely on voluntary reporting to protect public health from PFAS,” she said.

Cargill’s approach to transforming procurement for 2025

Legal Procurement Metrics: What Are Your Clients Using to Measure Your Service? | Legal Marketing Association (LMA)