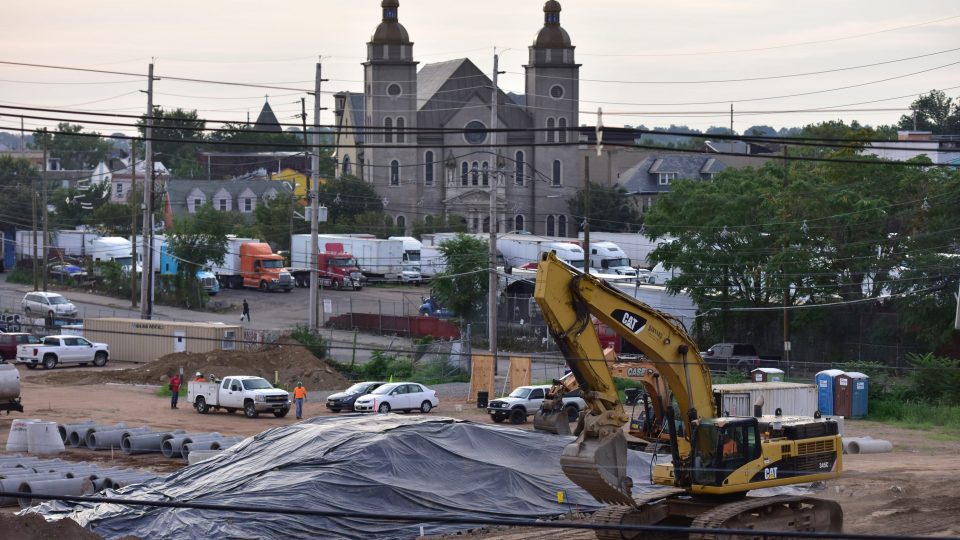 Construction at former Pantasote site in Passaic on August 14, 2020.

Once a poster child for Passaic’s urban blight, the former Pantasote property is getting new life as crews begin construction on a warehouse that will sprawl over 100,000 square feet.

Tucked below Route 21 on the city’s Eastside, the 8-acre site had for years been one of the city’s oldest and most derelict properties, rife with drug abuse, targeted by arsonists and used by the homeless.

Its rebound has been 30 years in the making, officials said, and a testament to what it takes to turn a city’s downward trajectory around. It takes money, a will to move forward and most maddeningly of all, time, officials said.

In 2004, the city released a revised Eastside Redevelopment Plan, which contained its vision for rehabbing the city’s most derelict 99 acres, including the Pantasote property., also known as 26 Jefferson St.

City planners saw an opportunity to repurpose the site, but the plan would require an environmental remediation and the removal of factory buildings.

There were stops and starts before real progress was made, officials said.

In 2013, the factory, built in the 1890s, was razed, and the city began actively trying to find someone to transform the property.

In April 2019, the city Planning Board approved the warehouse application from IDI Logistics, an Atlanta-based developer that builds warehouses all over the country.

Last month, construction crews began to transform the site. In less than a year IDI’s plan calls for an 111,111-square-foot warehouse. Its brochure boasts of 27 loading docks.

Rendition of what new logistics warehouse at 26 Jefferson Street in Passaic will look like. (Photo: Photo courtesy of Hector Lora)

Bob Stephens, market officer for IDI Logistics’ Ohio office, said the location is well-suited not only because of its proximity to major population centers and transportation hubs, but the “last mile access” to the warehouse.

“There’s not a lot of street driving before you hit Route 21,” Stephens said.

For one, the land around of the warehouse will have grass and other image-softening greenery. For another, it will provide hundreds of jobs. Both are sorely needed.

“Would I have liked it to have been thousands of jobs?” Mayor Hector Lora said. “Of course.” Then again, before the warehouse project, there was nothing, Lora noted.

City Council President Gary Schaer said he is thrilled by the transformation, adding that the warehouse, even with a 30-year tax abatement, helps with taxes, improves the Eastside’s aesthetics and provides jobs. “It is a dream come true,” he said.

In 1891, newly founded Pantasote Leather Co. built a three-story, 300-foot-long factory on Jefferson Street, according to the book “News’ History of Passaic,” by William J. Pape and William W. Scott.

For decades workers created imitation leather that was used around the globe in carriages and trains, and Pantasote was in the forefront of waterproofing materials.

Pantasote operated for years, but went the way of the dozens of manufacturing firms in the city, leaving for greener pastures.

A quarter-century later, “This has finally come to fruition,” Schaer said of the revival.

PASSAIC NEWS: Sevilla, a 35-year-old Passaic restaurant, will be replaced by a Taco Bell

Stephens, of  IDI, said part of the reason they settled on Passaic was its willingness to work with companies.

“We are very happy with the city,” Stephens said. “They have chosen to partner with us.”

Stephens said initial construction should be complete next summer. The property then will be configured to suit whatever company leases the property.

Matt Fagan is a local reporter for NorthJersey.com. For unlimited access to the most important news from your local community, please subscribe or activate your digital account today.

Things to Do: The Jacks at Warehouse Live